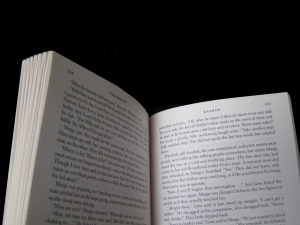 Just finished reading Game of Thrones for the first time after my ex-next door neighbour went ape last year when I said it had been made into a TV show. He said it was the best fantasy series he had ever read and I thought it was worth a punt for the £3 or so it was selling for at the time. It has been sitting on my shelf for about 6 months, so I thought it was time to blow off the dust and have a break from my Star Wars books that Siggy’s mum cadged for me from a jumble clear out and the Bond series I got from Sue Ryder a while ago.
I have purposely not watched any adverts or episodes for the tv show although everyone I mention it to says it rocks. I didn’t want to spoil the reading – which is always better than the tv show / film adaptation. Suffice to say the book kicks ass too. It delivers on so many levels – it has an excellent back story for the fantasy world, lots of detail on customs and religions, really evil characters in conflict with really heroic characters and new spins on all the fantasy cliches you’d expect to find in such a tale. I have started reading Book 2 straight away rather than reading something else.
I think the main thing that it has going for it is that George Martin is not precious about his characters and if it is their time to die then there’s no getting out of it – it’s curtains regardless of how fond the reader is of the character. This allows him to build some quite sneaky twists and turns into the plot. can’t say anymore as i would hate to spoil it for someone who has not read/seen it. I thoroughly one hundred percent recommend this book and once I’ve seen the tv show I will make my opinions known on that too!