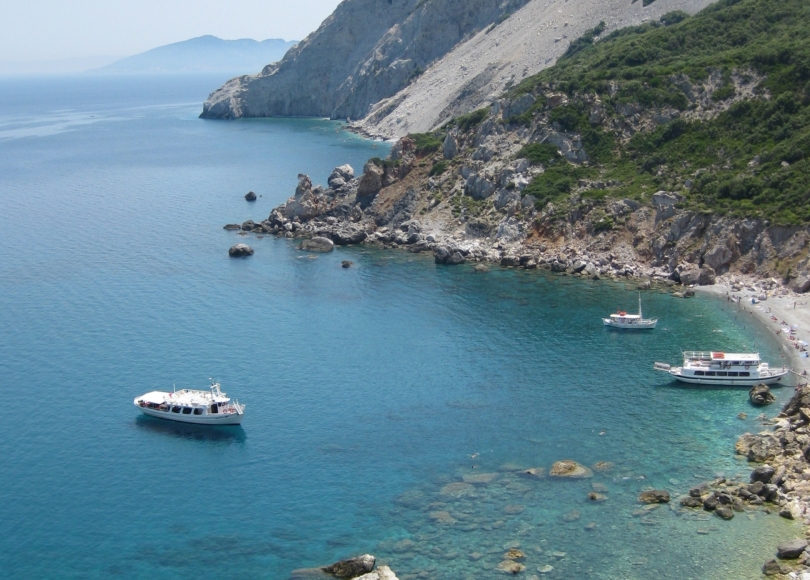 I finally finished the Wotsits and the Star Wars book – both of which I was disappointed with (see later post for a collection of reviews of the ‘holiday books’). I bought some more Bugles to replace the Wotsits and started reading The Novice.

Time passes differently pool-side; it was here last year that I had the embryonic ideas for my new book ‘Lucky’ floating around in my head. It involves time. Writing Lucky is obviously on hold while I am in Skiathos, but if anything comes to me I will write it down. [Nothing did as it happens, apart from an idea for a short story called ‘Shiny Happy People’ that will go into the collection ‘The Sun & the Rainfall’ – another ongoing writing project].

George the daytime barman at the hotel told Rania I was a ‘writer’ (Rania is one of the two sisters at the hotel; the other being Roula). She seemed impressed that I am a ‘writer’ and was interested in Broken given that it is set in Skiathos. I told her that it’s not a ‘happy smiley’ book and described it as a ghost story, which may have been a little misleading I guess. I find it difficult to talk about my writing to people I don’t know that well and even more so with people I do know, apart from Siggy who is patient enough to put up with my usually drunken ramblings about plot points etc.

Swimming is going okay within the boundaries of my comfort zone – just widths, no breathing and only as far down the depths as I can get without my feet losing contact with the bottom of the pool. I have been watching other people swimming and still can’t see how it can be so effortless for them. I’m well jel as they say on TOWIE. I can’t stare too long in case they think I am a perv. No comment.

Today is very simple = pool, food at Victoria and then quiz at Chris’s. I am writing this just before we go out to Victoria. I feel a mixed grill coming on.

Mixed grill with mashed potato – get in! Who said Greek food is rubbish? No celebs tonight, although Damon Hill was on TV and he looks like Siggy’s dad – so it was a reverse celeb lookalike. Chris has got an enormous satellite dish at the back of the bar which is why he is the only bar owner who can boast of being able to show ITV HD and BBC HD sports channels as well as Sky 3D HD.

The quiz was, as they usually are, quite stressful and a source for arguments to spring up out of an otherwise pleasant evening – ‘you said this’ / ‘I said that’ / ‘why did you cross that out?’ etc. We didn’t argue in the end. We did okay given that it was just the two of us and managed to avoid any lasting damage to our relationship. I did cross out Moonraker in favour of Licence to Kill as Shirley Bassey’s Bond Theme; Siggy repeatedly saying ‘you’ve seen them all!’ did not help. At least I wrote it down rather than drawing a complete blank. It’s funny how competitive some people can get over something that’s just supposed to be a bit of fun when there’s no footy to watch on the box.

I will admit to wanting to call in an independent pub quiz Ombudsman during the answers to the music round where I had correctly identified Blue by Eiffel 65 only to be told that it was a Flo Rida track – obviously Mr Rider had sampled the Europop hit for his more recent musical outing. Funnily enough  had put Flo Rida as an answer for someone who turned out to be L. L. Cool J. Siggy mistook Kevin Spacey for Bob Mortimer the light was so bad. My how we laughed and then had a debate about who did the original version of Funky Town that was playing once the quiz ended. It was the original version by Lipps Inc, but I said it was Psuedo Echo that were the original artists and it was covered later.

Totally AAT and I will apologise now, officially in writing as promised if I found I was wrong post-Google. Sorry. LOL.