We walked uphill from bus stop 1 in Skiathos Town to the Panorama Taverna. This took about an hour. There was a slight breeze and a few clouds, but it was still humid and Siggy was suffering a little from excessive and repeated alcohol abuse. I wasn’t feeling too clever myself (there’s a reason why the B52 is usually served as a shooter), but we had plenty of water and knew what we were letting ourselves in for and took it slowly. The walk was worth it for the fabulous views of Skiathos Town, the Aegian, the islets and the surrounding hills.

At the taverna I watched, but stupidly didn’t film or photograph, a passenger jet land at the airport. I have seen it up close and personal a few times now, but it was the unique vantage point – standing above the aircraft – that was special. 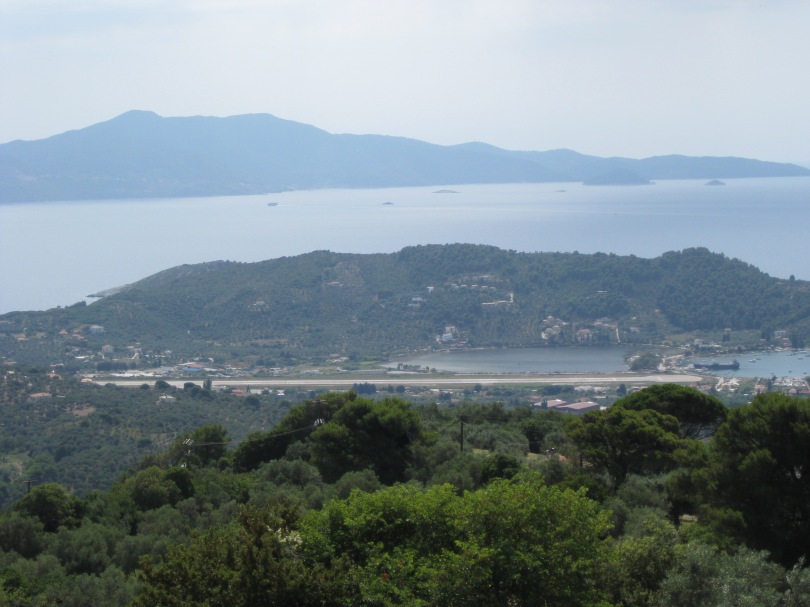 Panorama is visited by Danny in ‘Broken’ and I realise I have taken some artistic licence in describing the location in the book. It was nice to get up there and see how it compared to what I had in my imagination after seeing a few photos on their Facebook page.

We took on a lot of liquids at the taverna and had a little wander around to a church on the hill and then went back down to Skiathos Town. This took about half the time as the ‘ascent’.

We had lunch at a baker’s on the outskirts of the town and pudding in a taverna town – yoghurt, honey, nuts and fruit – all good healthy stuff and not a Magnum, Scandal or Boss ice-cream in sight. Given that the weather was looking a bit changeable we thought it prudent to check with the boat trip people that tomorrow’s trip to Skopelos wasn’t going to be too rough. We were told that it would be okay, but a little windier than our first trip.

The bus back was full of shiny sweaty people and reminded me of the London Underground.

We spent the remains of the afternoon pool-side and Rania said she had been wondering where we had gone and let slip that I was nicknamed ‘the cap’ because I am always wearing a white baseball cap to protect my head from burning. I did a few widths of the pool but had no energy in my legs so gave up and we both fell asleep for a bit. I finished reading The Novice and immediately moved onto Almost Moon (see later post).

Later we had tea at Porto Rosso near bus stop 10 following a recommendation made to Siggy by someone in the pool. I had pizza and panna cotta – all very Italian. [Although we had panna cotta at several taverna’s the runnier panna cotta at Jonnie’s remains the unbeaten champion]. The pizza was just as good as the one’s I have eaten in Rome and served with less attitude. We are day-tripping again tomorrow, and given the icky feelings this morning, the only alcohol consumed was some complimentary Ouzo at the taverna. Disgusting stuff.

We had a coffee at Salt and Pepper and a nice chat with the barman there, a coke at the hotel and at chat with Roula before bed. The celeb lookalike for today was Vince Clarke of Erasure, Yazoo and Depeche Mode fame, who has found work on the buses. We’re into our second week now and I’m trying not to see the days ahead as a countdown.