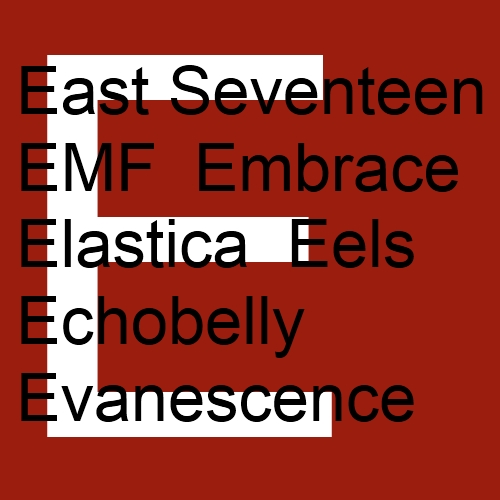 I have only seven bands in my main CD collection whose names begin with the letter ‘E’ and they are a mixed bag.

Standing head and shoulders above the rest are Elastica. Their first eponymous album is amongst my all-time favourites. Yes I know they were criticised at the time for nicking guitar riffs and tunes from other bands, but the likes of Fat Boy Slim have been getting away with that kind of behaviour in the form of samples for years. I actually bought one of the albums referred to by one critic, by a band called Magazine if I remember correctly, and thought it was big pile of shit. I no longer own said album.

All the songs on the Elastica album are great and I find it difficult to pick any particular ones as being better than the rest. The singles obviously jump out a little, but only because of their familiarity in my mind. I like the fact that all the tracks are reasonably short and powerful. I love Justine Frischmann’s drawling vocals and was caught up in all the Suede / Blur connections; being a big fan of both, and let there be no doubt that I had a major crush on her too.

Their album The Menace which came out five long years after the first pales in comparison, it reached Number 24 in the album chart compared to number 1 for Elastica, but is not without merit. I enjoyed listening to it again as part of this ‘exercise’ in OCD. The indie-rock-meets-Kraftwerk song Da Da Da while ‘very Blur’ influenced is one of my favourites on the album along with Image Change, Generator and  Mad Dog God Dam. In fact this album has gone up in my opinion and will be played a lot more in-between this alphabetical slog.

Echobelly existed around the same time as Elastica and were slightly more prolific – producing three albums between 1994 and 1997. Some people said that they were influenced by The Smiths, but it wasn’t obvious to me at the time (not like it was with Gene for instance). Their first album Everyone’s Got One or E.G.O. (see what they did there?) is the best. Today Tomorrow Sometime Never, Give Her A Gun, I Can’t Imagine The World Without Me and Call Me Names are fantastic tracks. Love the vocals, love the sentiment and again, yes I admit it, I had a major thing for Sonya Madan. Having done a quick check of the spelling of her name on t’interweb I am surprised to read that they have done five albums. I own three and that’s as far as I am willing to take it.

Their second album ON features ‘the one everyone has heard’ i.e. King Of The Kerb (if you haven’t heard it don’t worry) which I don’t really like. I much prefer tracks like Great Things (which I absolutely loved at the time of release when I was still vaguely optimistic about my opportunities in life), Something Hot In A Cold Country and the quite depressing and well sung Worms And Angels. Madan’s vocals were once again mesmerizing while the songs seemed to be creeping towards a more indie-pop style, something I wasn’t that comfortable with. The edge I wanted in their music seemed to be becoming blunted.

Their third album Lustra seemed to complete the band’s descent into blandness. The only thing worthy of note in my opinion is that the track numbering on my CD is wrong – there are two tracks listed as number 6 and as a result the title track Lustra is listed as track 11 instead of 12. I found it quite annoying when I used to listen to it trying to find the one track I actually liked. Once imported into iTunes the track listing sorts itself out, but I still can’t find that track! Suffice to say I was really disappointed with the album, but note in retrospect that it was released the year I had to finally stop being a student and get a proper job.

I was not a major fan at the time, and was unfazed by Brian Harvey’s ‘fall from grace’, but some of East Seventeen’s tunes bear repeat listening and I think that they were the least annoying boy band from the Nineties. I often put their Hit Singles collection in my car and especially like House of Love, Steam and Let It Rain and think Stay Another Day was a reasonably good Christmas single back in the day.

In comparison I was a major EMF fan from their classic single Unbelievable onwards. Schubert Dip is a great album from 1991 and features the brilliant I Believe which I believe (sorry couldn’t resist) is better than Unbelievable. Children is also a brilliant opening track to the album and the sweary live bit at the end of Longtime closes off the album nicely. I have fond memories of dancing to Unbelievable and Lies at the Students Union with sweat pouring off my body and a wobbly plastic pint glass of piss weak beer in my hand. Glory times! It was great shame that the band could never again match the heady heights of Schubert Dip and descended into obscurity after their cover-version single I’m A Believer with Reeves and Mortimer in 1995, which was always more about Vic than anyone else after his success with The Wonderstuff on the Dizzy single.

Evanescence descended on my psyche like a hand grenade with the gothic rock song-video combo that was Bring Me To Life. To be fair the song on its own is great, but the video was so memorable that it plays in my head when I hear the song anyway. Going Under sealed the deal for me and I bought the album Fallen on the merit of the two singles. Also, again, I fell in love with Amy Lee. She is a great singer as the third My Immortal demonstrates well.

I am not a big vampire / Goth fan, but it’s hard not to be when it has been so prominent in our culture of late. I think the resurgence of interest started with the Anne Rice books and it blossomed like a dark blood stain from there. I cannot disconnect the music of Evanescence from this genre and so as I have said before I really have to be in the mood to listen to them.

I downloaded their next album and cannot say that I have listened to it very much. Then I got the latest self-titled album on CD for Christmas in 2011 – I put it on my Amazon Wishlist and thought that I had nothing to lose if it was a bit plop. I really like the opening track What You Want, but find the album a bit samey. I hate it when people say ‘all their songs sound the same’ (for the likes of Queen, Status Quo, REM etc.); just because a band has a definite style and sound doesn’t mean what they do is bad. However, I have to say in the case of this album all the songs, while lyrically closely entwined which is great if you still have a boner for Twilight themes, do unfortunately sound too similar to each other.

In a similar way to Evanescence, Eels had the one stand out track that made me buy their album Beautiful Freak which was of course Novocaine For The Soul. It was that and the brilliant cover image of the girl with the huge eyes crawling towards the camera. The album itself is pretty good, but nothing else really jumps out at me. I can have it on in the background while I am writing and not notice when it’s finished. That said Novocaine For The Soul would probably make it into my Top 100 favourite songs if I decided to make a list. But I don’t do lists. Honestly I don’t…

Embrace somehow seemed different at the time but on hearing their 1998 album The Good Will Out again in retrospect they just sound like one of the many Oasis wanabee bands that were being signed up by the music industry at the time. All You Good Good People and Come Back To What You Know are the only two songs I have much time for and I find the rest of the album quite boring. Their 2000 album Drawn From Memory is resigned to my NSG collection.

At the time of writing this I am almost done with CD’s in the ‘F’ section, but I am waiting for the third Fischerspooner album to arrive so I can lambast or glorify it. I have also got hold of the quietly released Manic Street Preacher’s album Rewind the Film, but have learnt a long time ago not to form an opinion too soon, especially when it comes to the Manics (more on this when I get to ‘M’).

I also got hold of AM by the Arctic Monkeys – this was a digital download. I really like it despite their further departure away from the fast-paced guitaring and clever lyrics of their early work. It seems a natural progression from Suck It and See and a further development of their sound with modernized percussive elements possibly at the cost of their lyrics.