I wake up early to the sound of what I can only deduce must be a team of removal men moving every piece of furniture and fittings from the room next door. I check the time. It is an ungodly 7:30am. I try to relax in the knowledge that some retribution will be had tonight even if we try hard not to make a noise – it’s another World Cup match featuring Greece tonight and Chris has promised free beer if they win. They are one of the best teams in terms of delivering a cohesive team performance which makes up in some way for their lack of skill. Time will tell.

I finish the ‘Hunger Games’ and then ditch a rotten sci-fi book after two pages in favour of a Hunter S. Thompson book from the hotel bookshelf. Various quantities of crackers, coleslaw, milkshakes and yoghurt are consumed. Widths are performed. I try to figure out how to tread water, but it’s just not happening for me. Siggy is a better swimmer than I am and she can’t shed any light on the matter either and doesn’t go beyond the point where her feet can touch the floor of the pool.

While I write notes I sit and wait for her to get out of the shower so I can scrape off the layer of white paste that has accreted over my patchy lobster pink body during the day. I use Garnier’s light and silky protection lotion which is not as sludgy or sticky as other creams but being water resistant has a tendency to collect in various nooks and crannies I won’t elaborate upon. At least we’re not on a beach and so I don’t have to contend with a lotion/sand mix.

Most of my tee-shirts are getting one wear in the evenings and then going into a washing pile as the paste loosened by showering tends to rub off on them during the evening. Which is why I shop a Primark for all my holiday gear. There is an inevitable Brazil/football theme to their designs this year with the notable exception of a totally rocking Los Pollos Hermanos number referencing the fictional fast food chain in Breaking Bad. Breaking Bad is something I have not written about for fear that spoilers would emerge and spoil the whole thing for me and Siggy. Suffice to say that we made sure we finished the boxed set prior to coming here and it was one of the best television shows I have ever seen.

We eat at Elia’s near bus stop 23 – it’s a stylish taverna attached to Mandraki Village boutique hotel and accessed across a bridge and recommended by her sister who stayed in the area last year. We get a taxi there instead of a bus. The driver is playing The Cult on his stereo, I resist the urge to air guitar. The buses have been really busy at around 7pm in both directions and I can’t face another Tube train style journey breathing in someone’s B.O.

At Elia’s Siggy is in interior design heaven while I wonder about the Radox bubble bath bottle shaped waiter container that is plonked on our table with the pricy menus. Siggy’s risotto is somehow temporarily confused with ‘cheese and onion’ pasta by the kitchen before being corrected and I think as a result my shank is served with a very similar looking risotto which is unexpected, incongruous, but tasty. We’re not sure what’s happened but the risotto is okay. I can cook risotto myself (it’s not rocket science) and so I am rather particular about the consistency – a little like Goldilocks was with her porridge. The lamb shank puts the one at The View somewhat to shame, but the service is peculiar. 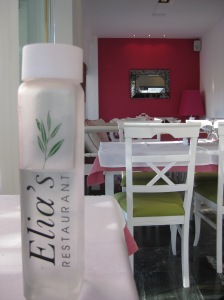 We speed walk to Eleni Beach to catch the ‘sunset’. I immediately point out a problem with this idea which Siggy has read in a guidebook. There’s a landmass in the way. So what we’re really watching, along with a small crowd of younglings, is the sun go behind the distant landmass prior to setting out of sight. That said it’s pretty cool to watch but we fall into the trap of trying to get the ‘perfect’ photo with various settings on our cameras rather than savouring the moment. I am reminded of a National Lampoon’s vacation movie.

We have a drink at a bar in sight of a bus stop. The bar has the most awful toilets which are only defeated in terms of their rankness by those at the airport. The bar itself is quite good with a good cocktail list, comfy chairs, pool tables and a dance floor. We narrowly miss the end of the Netherlands versus Mexico game but I can tell from who is smiling and who isn’t on the bar TV who won. We catch an almost empty bus back to Troulos.

Tony at Tiffany’s lets me try a shot of mastic, which I always thought was glue, and I find that it falls between ouzo and retsina in terms of its palatability. Unfortunately it repeats on me for at least an hour after consumption. We stroll round to Chris’s for the Costa Rica versus Greece match. It turns out to be a marathon affair. 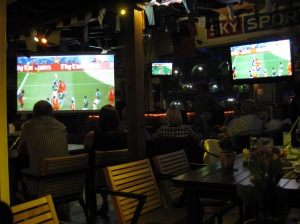 Joanna gets to run around with a flare when Greece equalise but as Siggy points out they haven’t won yet. It ends with penalties and a disappointed walk home at 2am. No free beer.