Drill Sergeant Siggy gets me up and onto a bus to Koukanaries Beach before I have time to realise what’s going on. We walk up and down the beach which is already hot and busy with various nationalities, shapes and sizes of people, some of whom would be better covering themselves up imho. No-one wants to see you’re boob job scars love and there only going to look worse when you tan. The sight conjures up an image of two large pink blamanches melting in the sun… but I digress… Nothing much has changed since our last visit and for a designated area of natural beauty it really seems to demonstrate what is eventually going to happen to the rest of the island once the airport project is completed. 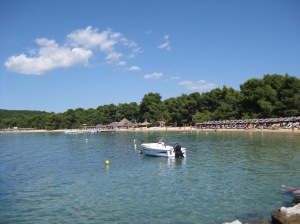 We catch a speedy water taxi from the beach to Skiathos Town. This jolly trip costs 5 Euros each and is much quicker than the bus and I can highly recommend the experience. Here’s the timetable:

It’s great to see the beaches from the sea and arrive into the Old Port like so many ancient travellers would have done (ignore the fact we’ve got a petrol engine instead of a sail and go with the flow). It’s kind of romantic in a way until you see all the tourist traps and get hassled by people wanting to sell you boat trips.

In town we select a fridge magnet as a souvenir – something we’ve done for all our summer holidays together. We’re not proud. Earlier in the year I accidentally spilt juice down the front of the fridge and it took me what seemed like hours to clean all the fridge magnets. It was nice to take a look at them while I was cleaning them as I usually ignore them completely.

Lunch consists of a ‘special’ crepe in one of the less crappy looking tourist joints on the main strip. The crepe contains various ingredients that could adorn a rather magnificent pizza in a parallel world. I wash it down with a vanilla milkshake which is a Euro pricier than those at the hotel and not as nice.

The bus trip from New Port bus stop is painfully slow in comparison to the water taxi; we stop at every stop and get stuck in a queue of traffic behind some moving furniture in a low-powered 1970s van belching white smoke on each hill. I wonder if they’re going to deliver it to the room next door so the scrapers have some more stuff to play with tomorrow morning.

Sunbathing back at the hotel pool gives an opportunity for me to catch up on lost sleep. The pool is busier today with a couple of toddlers dicking around, but the sound of their nonsense is drowned out by the drone of quad bikes racing past. While I am awake my senses are dulled to the point where even brain freeze induced by a strawberry slush puppy is experienced as a mild peripheral niggle while I seem to be declining into a form of comatose state. Some people are drinking beer; it’s ridiculous but I salute their dedication to the holiday experience.

Given that this is the last night of our holiday in which there will be any World Cup action the location for our evening meal is a total no-brainer; and it’s a good job because I seem to have left part of mine on the water taxi. After various lotions and potions we proceed to Chris’s to see what I can confirm was the dullest match of the tournament – Argentina versus Switzerland. The Swiss are my second to last hope at unlikely sweepstake victory and are underwhelmingly mediocre. Argentina don’t appear to be trying at all and it’s a relief when it ends. While this is unfolding I eat a very nice chicken kebab and some powerful tzatzaki which is loaded with enough garlic to kill off Dracula, his wives and half the Twilight cast in one fell swoop. Siggy satisfies her craving for cheesy chips. Cordon bleu it is not, but it hits the spot nicely. A large Mythos helps the digestive process and takes my mind off the dross on TV.

We walk to and then past Tiffany’s as there’s some kind of live Greek music thing happening and it hurts my ears. Victoria’s isn’t much better; there’s some kind of bearded American in a corner acting as an MOR human jukebox. At one point he asks ‘do you like Chris Rea?’ and despite us shouting ‘No!’ he proceeds to play an awful cover of some obscure Chris Rea track I have never heard or want to hear ever again. We resort to the list of shooters on the back of the cocktail menu. As the internal alcohol levels rise in our bodies we encourage each other to clap sarcastically and enjoy the ‘it’s so bad it’s good’ moment. I admit it is slightly better entertainment than the football.

Back at the hotel bar we watch Belgium versus USA on the television in the reception area – team America are now my final hope at unlikely sweepstake victory. The Alpha beer at the hotel is actually nicer than the ubiquitous Mythos and George gives us nuts and politely ignores the fact that we stink of garlic and spirits.