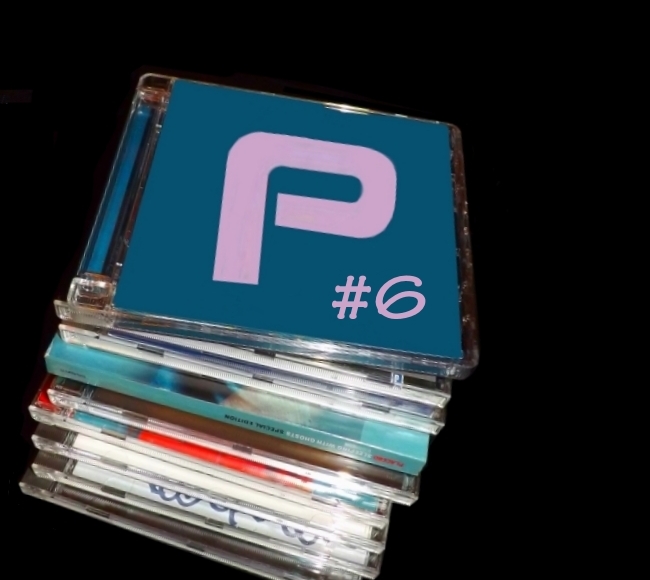 A Dog with a Bone

If you’ve been following my recent posts about the PWEI CDs in my collection then you’ll know that I used to own a tape of The PWEI Cure for Sanity recorded off a friend that had different versions of tracks on it in comparison to my CD. I knew that the album had been subject to a reissue and suspected that the CD I had was the reissue not the original version and this is indeed the case.

I bought the 2011 expanded version of the album in the hope that the second CD in the pack would contain the mixes of the tracks I had on cassette. I listened to the CD and found that the tracks weren’t those I remembered. After some shenanigans trying to get both albums onto iTunes without getting doubled up tracks I started paying more attention to track lengths on my old CD and the first CD in the extended version. Something didn’t add up…

For instance the track on my original CD which I always thought was the “edited highlights” version of Cicciolina was only about 4 minutes long when it was supposed to be 7:40 according to the back of the CD, and the same track on the new CD had a correct length of 7:40. Also having listened to the version of “Dance of the Mad Bastards” on the new CD I finally remembered that the tape didn’t have the ‘ultrasonic technicolor climax…’ shouted intro and neither does the 2011 remaster.

So I realised that the remastered album (with the exception of the last five tracks) is the original version I had on tape and that the back cover of my old CD refers to tracks on the original album too but contains the reissue version of the album.

So happily I now have a great sounding version of the album as I had it on tape and also the old reissue from 1990 on which some of the tracks are incorrectly labelled on the case (but the times are actually printed correctly on the CD). I’ll just say the ‘yay’ that I’ve been waiting over twenty years to say and leave it at that. Yay!

After being dropped by RCA and courted by various other would-be labels, PWEI signed to Infectious in the UK (staying loyal to their old supporter Korda Marshall), and were signed in the USA by Trent Reznor’s Nothing label. Their new harder sound has been described as industrial funk-metal and I won’t disagree.

There’s very few samples in the album apart from some Led Zeppelin and the Terminator 2 theme tune in “Ich Bin Ein Auslander”, a Ministry sample in “Everything’s Cool” and a ickle bit of Black Sabbath in “Familus Horribilus”, but PWEI had clearly developed through the troublesome The Looks or the Lifestyle phase and weaned themselves off their dependency on other people’s music. I bought Two Fingers My Friends the remix album, but didn’t get on with it, so I won’t be talking about it more than that.

Have I Got News for You

Here’s what I thought of  Dos Dedos Mis Amigos back in the day when the student newspaper let me have my say: 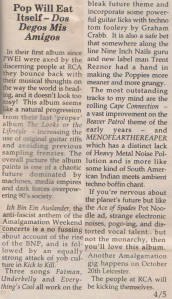 You can’t dispute my enthusiasm, please ignore some of the inaccuracies and the brilliant typo in the title. This review shared space with reviews of Terrorvision’s “Alice What’s the Matter” (4/5 me again), Oasis “Cigarettes and Alcohol” (4/5), Sugar “Believe What You’re Saying” (of which the reviewer said ‘has no tune at all’ and gave it 1/5! What?), and last but not least Green Day “Paradise” (which got 2/5 and clearly demonstrates what I was up against back then…)

I recently got the expanded version of the album (to get hold of the ‘lost’ 1996 album) and I’m impressed by the remastering they’ve done – each track sounds better than ever.

“Ich Bin Ein Auslander”, sadly missing an umlaut, PWEI’s warning about how the politics of hate that were growing in the UK seems as applicable today as back then. The band had sprinkled revolutionary lyrics into other songs but this was the first overtly in your face political song released as a single and was coupled with support for the Anti-Nazi League at their gigs.

“Kick To Kill” exemplifies the hard edge of their newest sound and I find it quite difficult to listen to unless I’m in a bad mood.

The politics continued with their anti-royal ditty “Familus Horribilus” again a sentiment quite alive twenty years later if you are to believe recent revelations in the newspapers. It’s one of the more groovy and old stylee tracks on the album with its distorted vocals, noise loops and repeated claim that it will be funky.

“Underbelly” is loaded with ominous beats, vocal noise and guitars. The harshness of the lead vocal emphasises the message about an emerging society where enough is never enough.

“Fatman” for me makes me think of Carter’s Sheriff Fatman but I think refers to the power of media moguls through their distorted view of the world presented in newspapers and magazines – especially women’s magazines urging people to lose weight and aspire to be as beautiful as the airbrushed models who adorn their pages.

“Home” in comparison to the previous track has a nice laid back vibe and extols the virtues of being back home after all the gigging. It is also perhaps a clue to why the band members went their separate ways after temporarily riding on the crest of a wave and being on the brink of breaking America. Wishing to go AWOL isn’t where your head should be on tour.

“Cape Connection” is a dangerous track if you listen to it in the car. It seems to have the effect of increasing the weight of your right foot. The driving beat and urging guitars make you want to get there, wherever that is, faster. My reference to “Beaver Patrol” in the news article was written in my belief that this song is basically about sex. It’s either that or drugs. Or rock ‘n roll.

“Menofearthereaper” is probably second only to “Ich Bin Ein Auslander” in terms of my favourite tracks. I love the vocal based loops, big bass laden beats, electronic twittering (almost like Stakker in places), and the chanting. Obviously related in some ways to “Don’t Fear The Reaper” by Blue Oyster Cult this track sounds like a kind of Native American chant to keep Death from the doorstep.

The lyrics of “Everything’s Cool” contain the name of the album and the two fingers my friends are a Churchill-esque peace sign indicating that everything’s cool rather than the two fingered insult attributed to medieval archers. The lyrics paint a rather bleak picture of the future as do the driving guitars, but the message is one of rising above it all.

Seeing “R.S.V.P.” performed live gave it a great edge. Go go gadget pogo legs! Join the party or get out… It was a wonderful crowd pleaser.

For me “Babylon” was the weakest track on the album and it was no great surprise to learn from the sleeve notes that this was a leftover from the previous album. Unsurprisingly given the lyric it reminds me somewhat of John Lydon’s refrain in “Open Up” on Leftfield’s Leftism.

What did surprise me is the radio version of the album which is tagged onto the end of the expanded release. This version sounds almost like a different track and while it perhaps loses some of its soulfulness in the mix it’s a lot easier to listen to than the original – which was usually interrupted by me either pressing the advance button to get back to “Ich Bin Ein Auslander” or pressing eject – ‘Eject Me’ the song seemed to be saying – the sad reverse of a previous track of theirs.

The other tracks appended to the album in the expanded version are also interesting additions, but I won’t comment any more than that because I’ve only listened to them a couple of times each.

Raindrops keep falling on my head

The one and only time I saw PWEI in concert was in March 1994 at Aston Villa Leisure Centre as part of their Amalgamation weekened. I remember having the choice of seeing them or seeing The Wonderstuff play what turned out to be one of their last ever gigs prior to their original split. I saw The Stuffies after they had reformed, along with Ned’s and Terrorvision as it happens in Nottingham many years later so I don’t ever regret the decision. The gig was long, arduous and awesome.

The support acts, and I’m sorry but that’s all they were to me, were Senser (I’m not a fan and we thankfully missed most of their set), Transglobal Underground (pretty cool), Fun-Da-Mental (who helped do “Ich Bin Ein Auslander” and were a bit weak live), Credit to the Nation (who was excellent) and Ultramarine who I frankly don’t recall seeing – maybe they weren’t there the day we were. I’ve got these names off a photo of the back of the tour tee-shirt on the PWEInation website.

Suffice to say that after several beers and a lot of jockeying for position, the long wait ended and PWEI lifted the roof off the leisure centre which was good because by that time condensation had begun to drip like rain on our heads. The band pogoed along with the crowd for the whole gig, Clint and Crabbie remembered their lyrics, March and Mole killed us with their guitaring, Fuzz was like Animal on the drums, and the atmosphere was electric.