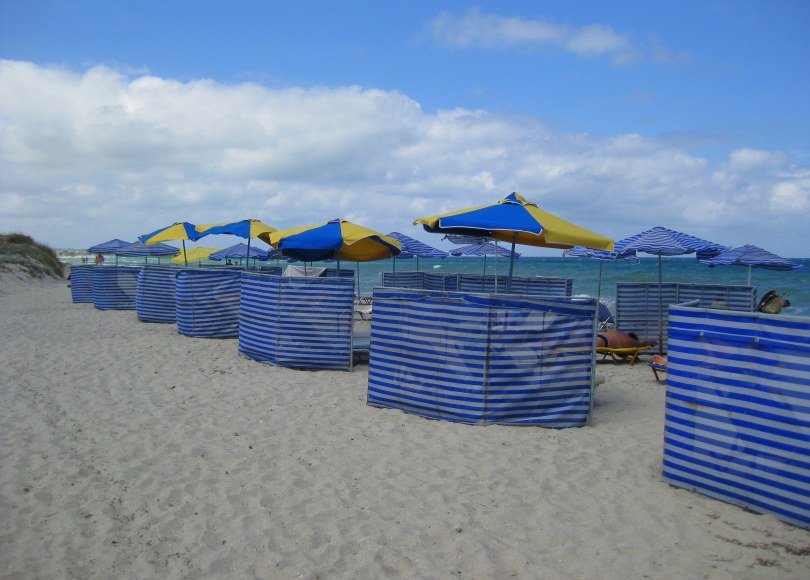 Dreaded clouds and a stiff breeze were the prevailing weather conditions in the morning so we decided to go for a walk. Sometimes this decision has led to some marathon excursions on foot, but not knowing the area we decided to keep it simple and walk the 3.5km along the back road to the neighbouring coastal resort Marmari. The road is one long stretch with a right turn into Marmari so navigation was not be a problem – we actually started the walk on our first night when we got kind of lost.

There’s a go-kart track roughly halfway along where we stopped for water, shared a banana and used the facilities, and a turning to get to some stables near the salt lake. As we continued to follow the road cyclists free-wheeled past us, pushed along by the wind, going from Marmari to Tigaki. There is a big emphasis on bike rentals (as well as cars, mopeds and a few ‘exotics’ like quads and dune buggies) perhaps because the landscape, with the obvious exception of Dikeo, is pretty flat.

I saw my first lizard today, a road-kill turtle, a road-kill snake (which appeared to be a couple of feet long) and a road-kill hedgehog. Wildlife is abundant and a little endangered I guess. As well as the annoying dogs and chickens near our hotel there are also turkeys, geese, sheep, goats, cows and even the odd peacock. Rumour has it that pink flamingos visit the salt lake sometimes too.

Marmari isn’t quite a shit hole, but it is a bit of a dump and not a patch on Tigaki. The beach front seems disorganised, oddly shaped and lacking facilities. Some people obviously think it’s okay because the place was busy with a good mixture of nationalities including a family from Birmingham who seemed unduly excited by the fact that a taverna offered baltis on their menu.

Siggy and I had a milkshake in one of the few beachside tavernas and watched the clouds gather and darken. A light spit of rain had us scurrying into a taxi and heading back to the bakery shop at Tigaki faster than you can say ‘sugared doughnut’. We then returned to the hotel for more food and to chance our luck by the pool.

Rain, which seemed to only last all of five minutes, pushed us to retreat to the relative attractions of the bar area. We had a couple of large Alphas (Alpha seems to be the predominant lager in Kos as opposed to Mythos) and shot some pool. Siggy seemed to get better the more alcohol she drank while for me the opposite was true and I was relieved when we decided to change our luck back on the loungers. Our relaxation didn’t last long as more spit and continued wind put us off for the day. The experience had shades of our first Skiathos misadventure but we were assured that the weather would only last for the day and normal service would be resumed.

We had a quick forty winks back in the room and then went and booked a few trips at Theokritos Travel – all the trips were pretty much identical to those offered by our holiday rep and all were cheaper. If you book two trips with them you get a free shuttle to and from the village of Zia to watch the sunset.

We went to Esperos restaurant café bar on the seafront for our evening meal (I’ll call this ‘tea’ from now one – I’m not one for calling it ‘dinner’, but ‘evening meal’ is wearing a little thin already). They do Thai and Indian cuisine as well as Greek, but I had a mixed souvlaki and Siggy had a Greek salad. We could vaguely make out the sunset from the taverna. The sky was lit with lots of different shades of orange and it might have been romantic if it wasn’t for the fact that a German family with two young babies hadn’t decided to sit right next to us despite the place being at least half empty.

At Memories I had sex on the beach and a zombie as well as lots of free peanuts and a couple of shots of raki on the house. We were also offered free shots of Sambuca or tequila but we’d had enough by then and I had a warning flashback of a time I got wrecked on tequila in Halkidiki.

As we walked back I was racking my brains trying to remember the name of the guitarist who isn’t credited on the Daft Punk video ‘Get lucky’ – my subconscious perhaps aided by the raki thankfully came up with Nile Rodgers before we got back to the hotel.

It has become apparent to us that drinks and food are significantly cheaper here in Kos than in Skiathos. On the flip side there do some to be a lot more mosquitos in Kos. Siggy has already been bitten on the back of her neck despite dousing herself with Jungle Formula (which she amusing keeps calling ‘Jungle Fever’).

We were woken in the night by what sounded like a burglar attempting to break and enter, but turned out to actually be Siggy’s chain of plastic cocktail monkeys falling off the nail she’d hung them on. My how we laughed… after we’d recovered from the shock…