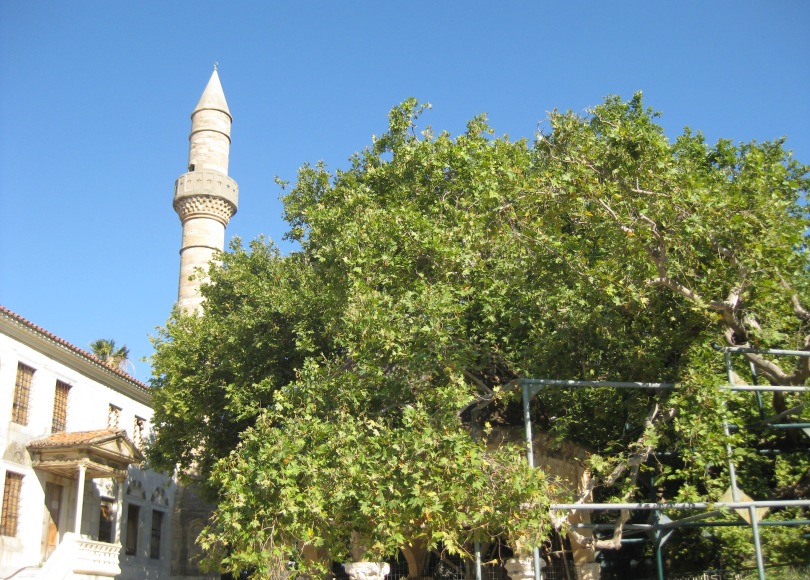 We got the first bus of the day into Kos Town. This pulled up at around 8.10am outside the big Supermarket (the closest stop to our hotel) and cost us 2 Euros each for a one-way ticket 9they don’t do returns).

Kos Town reminded me a lot of Rhodes Town as it is modern looking for a Greek town but still has pockets of history for the day tripper to explore. Our first stop, via the square where Hypocrites’ tree (or at least an old descendant of said tree) grows, was the imposing castle which stands strategically near the harbour.

It was built, in some areas very quickly from ruins of the ancient city, by the Knights of St John (I’m assuming also known as the Hospitalers as opposed to those equally dodgy characters the Templars) who captured Kos in 1314 and got ousted by the Turks in 1522.

It’s an impressive castle and the imagination doesn’t have to stretch too far to imagine it fully staffed with peasants, knights, maidens and guards looking out of the Aegean and watching the sea lanes with their pals in the fortress of Halikarnassos in Asia Minor on the opposite coastline.

In true Assassin’s Creed style we came across a haystack and a couple of doves resting on the sheer wall of the square tower above. An obvious jump point if ever there was one.

After the castle we checked out the ancient Roman and Greek ruins which were mostly obscured by tall grass and weeds. The site needed the attention of the chaps we had seen as the castle with petrol powered strimmers. I was expecting a much tidier Time Team style excavation like those in Chester or Segontium where the layout of the buildings on the ground is clear, so I was somewhat disappointed.

Later we wandered around the harbour and walked along the beach and the cycle path to the Lambi (a.k.a. Lampi) area which seems like a Scandinavian enclave. There’s a strip club there called Emmanuelle which had a stretch limo parked outside – made me think of Grand Theft Auto.

I got a pork pitta gyros for lunch, my first of the holiday, on Nafklirou – a pedestrianised road lined with tavernas on one side and the ruins on the other which I am sure gets very busy at night or at the top of the season, but was relatively quiet when we were there.

We had a quick look at inside a bath house and at the cathedral church and then got the one o’clock bus back to Tigaki. The buses to Tigaki run every hour on the hour from the bus stop area which is about five minutes away from Nafklirou. A www.Skymap.gr map we picked up at the go-kart place on the way to Marmari a few days previously helped us immensely with our navigation around the town.

Kos Town was good for a half day visit and it’s obviously a starting point for a lot of boat trips and ferries to other islands and indeed Turkey. There is a trip you can do to Bodrum in Turkey which we ummed and ahhed about and decided against.

Back in Tigaki we relaxed by the pool and I had a bit of a swim as it was clear of kids. It is still quite quiet and would be blissful with the warm sun and cooling breeze if it wasn’t for the background noise of the ‘Mummy this’ and ‘Daddy that’ running commentary. What a grump I am…

On a positive note the shower in the room is indeed fixed; so our typically embarrassed complaint paid off. We went to Oneiro Taverna for tea. I had a mediocre stifado which was more onion than beef and the onions weren’t baby but just normal pieces. Probably a whole onion’s worth. I got molested by more mosquitos but thankfully avoided any further bites. The ones I had are swelling and itching. Very unusual for me.

After being disappointed by Oneiro we went to Whatever bakery café in the hope they would have some apple pie left but they didn’t. Instead I had a Nutella filled crepe. Siggy only wanted a bite so the bulk of the calories went to me. I weighed myself the weekend after we got back and I had put on almost half a stone in a fortnight which I think’s a good indication that I ate very well indeed.

We had cocktails at Comfy and Memories which was showing England Under 21s getting thumped by Italy. We walked back gazing up at the stars and listening to an Elvis impersonator murdering one of the King’s classics – his voice carrying over a great distance from a hotel complex a block from the beachfront thanks to the breeze.