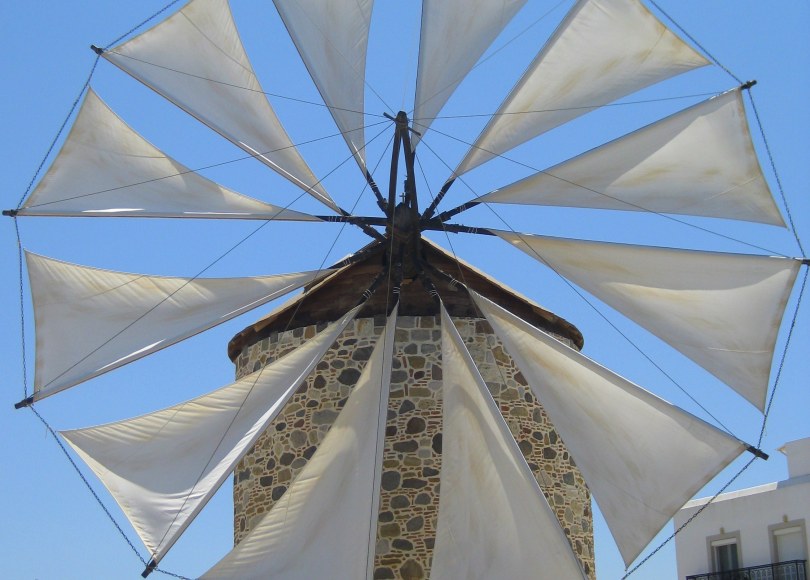 Simply the best way to see the delights of Kos island in a day! A fully guided tour with the history, the culture & the myths… all there is to know about our fascinating island. Our route takes us to the Asclepion (4 Euros) and then up into the mountains, to the highest village of Zia. Lagoudi is another stop where we visit the church. We then head towards the centre of the island to Antimahia, where there is a traditional house museum and the islands only working windmill. Our next stop is Kefalos village for the delightful view before a lunch stop in Kamari Bay. Next is a visit to the south coast of the island in Kardamena where you will have some free time, before we head back by the scenic mountain route via Pyli. Sometimes we visit Mastahari fishing village instead.

The Asclepion was a very impressive set of ruins and with the expert tour guide’s explanation it wasn’t difficult to understand what the site was all about and how it was the birthplace of diagnostic medicine and hospitals as we know them today. He expertly transformed it from being just another ‘pile of rocks’ which is how one Brit joker described it on his way out as we were queuing to get in.

In comparison to the ruins in Kos Town the Asclepion wins hands down and the views from the hill were excellent. I can imagine that it gets busy at the height of the season and in fact our guide told us that the queue to pay the pittance of an entrance fee was all the way backed up into the car park on his previous visit in the middle of the week. The sun was very hot today and I was glad that there were less people around and the queue only took about ten minutes to clear.

The mountain village of Zia saldy appeared to just be a collection of souvenir shops and tourist tavernas. The views were exceptional and there was an indication that if we had been allotted more time we could have explored up into the mountain where there is a church and a nature trail. I had some more of that cinnamon drink and Siggy had some homemade lemonade at a taverna with a splendid view of Tigaki. It turned out that we could get homemade lemonade from our hotel and that they use the lemons off the trees that surround the hotel – it tasted just as good as the stuff in Zia.

Zia was all tavernas and tat whereas the nearby village of Lagoudi was a more genuine experience – dare I say more spiritual than materialistic?

No that’s pretentious and overplaying the experience! But the juxtaposition was tangible. The priest at the church was very friendly and gave us some cherry tomatoes to eat and some mint when we left the church. It’s traditional to give gift of basil or mint when you leave someone’s house apparently.

At Antimahia I managed to dive off the bus and lose Siggy who needed the loo. So I found myself trapped inside the last working windmill of Kos island without my partner in crime and with my sweaty hands covered in flour. It was a testament to the care of the lady telling us about the windmill that head bang number 5 never happened as it was a tight squeeze in places. Her chat was a little slow and by the time it had finished I only had time to apologise to Siggy who was happily sitting outside a café and stick my head inside the house museum which frankly looked a bit boring.

We didn’t do Kefalos village and instead went straight to the taverna in Kamari Bay. I think we were the only couple to diss it off and instead go and take some photos of the beach and try a different taverna which, while we got served comparatively quickly and had time to pop into a supermarket and take more photos, was a bit crap. The pork gyros was a fake – pitta was nice but the pork was not genuine gyro carvings and instead a random collection of gristly off cuts best thrown in the bin instead of down my hungry gullet. I ate it all the same. No tip.

Then we had an undocumented stop at a honey farm. I have no idea exactly where this was apart from to rather unhelpfully say it was somewhere between Kamari Bay and Mastahari. The traditional dumplings (gulab jammum style) covered in honey were a hit and we also got to taste all different types of honey from bees collecting nectar from different types of plants. I think the heather based honey was the best. There was digger parked around the back which I referred to as a ‘JC Bee’ in a jokey comment to Siggy only to be corrected by a secret resident expert on such vehicles hidden among our tour participants ‘Actually it’s a Caterpillar..’ he said. Thanks mate. He also identified the exact model, but really it was unnecessary; the damage had Bee..n done. See what I did there..? Maybe I should have told him to mind his own beeswax?

Mastahari village was the last stop where we saw lots of drying octopus (I remember the plural being discussed on QI but cannot remember the outcome, but I’m sure octopi got the dreaded klaxon), had a wander around and bought some ice creams. It’s a relatively small place with a statue of Neptune on a roundabout, a few sunbeds and a handful of tavernas. Unless of course we got distracted by the ice creams and didn’t explore far enough. I think by that point we were a bit pooped.

After Mastahri it was back to the hotel for a couple of hours relaxing at the pool. We ate tea at the very popular Nisiotiko taverna which involved some pastitsio – a bit like a cross between macaroni cheese and moussaka – and our one and only baklava. There was complimentary ouzo at the end of the meal which was a nice touch, but tasted horrible. But doesn’t it always. They did offer us schnapps too, which Siggy sensibly opted for.

Then we solidified our almost formed habit and went to Memories for cocktails. Everyone has to have a local I guess. The music is good, the staff and mixed clientele entertaining. Plus the free shots are handed out quite generously to regulars. There was a wedding party in there tonight which made the atmosphere very celebratory.

We went and thanked the woman in Theokritos Travel as Kostos, our guide today, and the one we had for the volcano tour were both excellent. We also popped in to the pharmacy in town and I bought some basil-based natural mosquito repellent spray for 6 Euros after a recommendation from Kostos. It seems to work just as good as Jungle Formula and doesn’t sting your skin when you put it on – it also acted as a hydrating aftersun, which was nice.