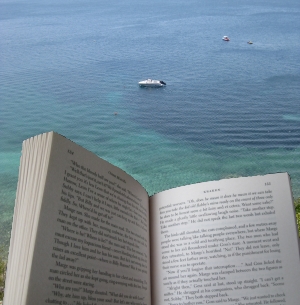 I started reading this book in Skiathos last year, took it with me to Kos and read some more and finally finished it when I got back home.  It has around 480 pages of small tightly spaced text and isn’t exactly your typical summer holiday read.

The book is essentially a collection of articles written by Hunter S. Thompson and transcripts of interviews (when deadlines were hours or minutes away and rushed notes had to be hurriedly faxed to the editor via the ‘mojo wire’ – an early fax machine) covering the 1972 US presidential campaign. The articles featured in Rolling Stone magazine throughout 1972 and were then released as this book in 1973, and illustrated by Ralph Steadman.

I went to the same school as Ralph Steadman, no shit I really did. Years later obviously! I was only two year’s old when the book was being written and Steadman was scrawling his distinctive acerbic cartoons.  I think my dad shared some classes with him. The illustrations are not very well reproduced in the dog-eared paperback copy of the book I was reading and I only deciphered about half of what Steadman was getting at. They excellently complement Thompson’s gonzo style prose (my understanding of which was also sometimes vague) often like a window into Thompson’s opinions.

The book is centred mostly on the Democratic Party’s primaries and the disappointing implosion of the campaign as different candidates competed for the shot at gaining ultimate power. Hunter spends twelve month’s documenting the campaign and the backroom deals, the rallies, the staged chants of ‘four more years!’, the political manoeuvring, the alleged drug use, alcohol abuse and dirty tricks that accompanied it. He does this in great detail and with his characteristic vitriolic vehemence, but at times the devil in the details left me exasperated. This was by no accounts an easy read like “Fear and Loathing in Las Vegas”.

The most entertaining sections of the book for me were when Thompson has verbal or written altercations with press staff from George McGovern’s campaign or has run-ins with the security staff. Revealing the nature of the paranoid and alcohol fuelled author rather than being anything to do with the main subject matter I find his voice amusing and somewhat heart-warming. Here’s a man who really cared about what was happening to US politics at the time and couldn’t face another four years of Nixon.

Here’s the man himself reading an extract from the book:

Some of the events from the book are portrayed in the excellent 1980 Bill Murray film “Where the Buffalo Roam”.

Towards the end of the book there is a highly revealing interview with George McGovern in which Thompson attempts to get an answer to what went wrong. McGovern is amazingly candid and it is unlike any interview with a politician I have ever read before.

If you are a fan of his style and/or have an interest in the politics of early 1970s America then this is pretty much essential reading. If not, you’ll probably find it even more hard going than I did. I’m a big fan of Thompson and it still took me over a year to get the thing finished. Good job I didn’t have a deadline!