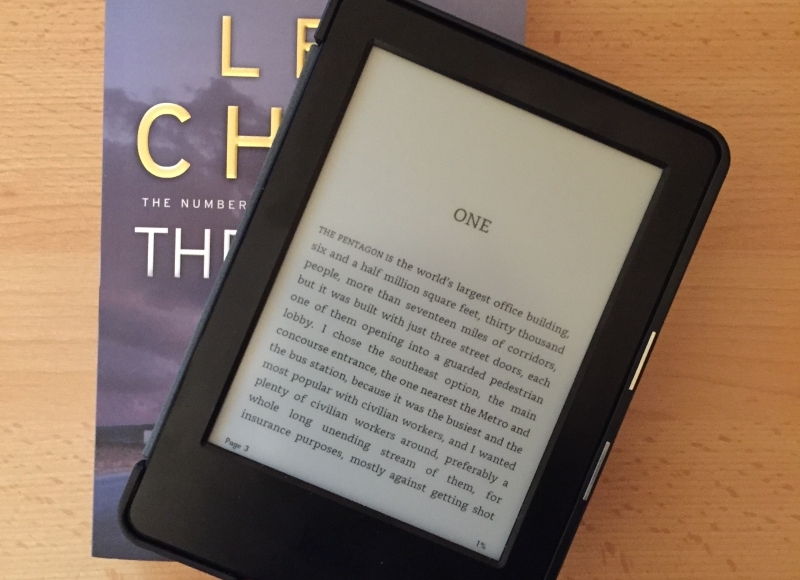 The work colleague who I pass my Jo Nesbo books to once I have read them kept recommending Lee Child to me. A few weeks ago he moved house and as part of reducing the amount of stuff he needed to transfer from one abode to another he gave me a lot of books to give to charity or keep myself. Most of the books went to the Friends of Loughborough Hospital but five Lee Child books were siphoned off to my bookshelf.

Predictably, faced with five out of sequence books, my minor OCD leanings kicked in and forced me on a quest similar to the one I am still on for Bernard Cornwell’s Sharpe series – that is to buy the whole series of books from charity shops or at least avoid full price purchases. So one lunch time I prowled around all the charity shops that sell books in Loughborough and cane up with three Jack Reacher books and also most satisfactorily two more Sharpe books.

Then it was off to Nottingham at the weekend to enjoy lunch at Red’s True BBQ and then on the street parallel with this restaurant to an Oxfam Music and Bookshop. A mighty haul was discovered – I think I bagged five or six titles from there. Then more recently back in Loughborough I happened upon a stash of Child books that someone had brought in only that morning. Maximum joy!

I had one book The Affair which was a prequel that I couldn’t find and I wanted to get a good run at the series when I got going so I opted to cash in some slow delivery bonuses from Amazon and bought the book on Kindle for the princely sum of £2 – roughly the price I’ve been paying at the charity shops. So having The Enemy and The Affair – the two prequels to Child’s first Jack Reacher book Killing Floor I decided it was time to begin.

In The Enemy Jack Reacher – imagine a big man with big hands who looks nothing like Tom Cruise – is still in the military serving as an MP. The story starts on New Year’s Eve 1989 when an Army Major General dies of a heart attack in a North Carolina motel, supposedly in the company of a hooker. Reacher investigates and notices a lot (he’s almost like Sherlock Holmes in his detective abilities) including the fact that the general’s briefcase is missing.

Reacher teams up with a sexy fast-driving female MP Lieutenant Summer and they travel to Virginia to tell the Major’s wife that her husband has died. However when they get there they find that she’s had her head caved in with a blunt instrument. The plot thickens… and thickens…

Inside the briefcase is an agenda for a meeting which Reacher surmises must have the potential to seriously embarrass Armoured Division who are, in the face of the collapse of the Soviet threat in Europe, facing severe cuts. The story plays out like an internal fight between the infantry and armoured sections of the US Army with Reacher stuck trying to sort it all out and get justice for the murder victims. When Reacher does get the opportunity to dole out punishment he really does mess about and I guess this violent attitude is something that continues throughout the series.

There is an interesting subplot involving his brother and his mother who lives in France and is very ill with a resolution which goes someway in explaining how Reacher is genetically inclined towards vigilantism. He doesn’t just get it from his father apparently.

While this first outing into the wonderful world of Jack Reacher (if you don’t count the film which I saw on rental a while back and sort of liked) wasn’t as great as reading a Nesbo book it was undoubtedly entertaining and novel enough for me to want a second bite immediately.

So I charged my Kindle and set about reading my first full length novel on the device. I had only read short fiction on the Kindle Reader App on my phone previous to this. I found myself warming to the experience when I realised that holding the Kindle while reading in bed was a lot more comfortable than holding a heavy paperback and it’s also a lot easier to ‘turn’ the pages – despite it having a right hand bias.

The Affair is a somewhat simpler affair (ah ha!) than The Enemy. Reacher is still in the army and is sent undercover to Carter’s Crossing, a small town in Mississippi, to try and find a murderer outside of a locked down military base. The base is locked down because there is a strong suspicion that the murderer is a soldier from the base.

Reacher, with the help of a beautiful female Sheriff who he ends up banging, uncovers a string of related murders of the most beautiful girls in the town. It’s a lot different to the previous book in that he hardly spends any time among his military colleagues and I guess serves as a bridging story to when he becomes ex-military.

Again justice is served in fatal measures by Reacher. The character reminds me of Judge Dredd in that respect and so I guess harks back to Dirty Harry. He is a big man who has a very unerring fix on getting his man (or woman) whatever the personal cost and then when he has him (or her) putting them firmly in their place (or grave).

He also, somewhat like Nesbo’s Harry Hole, isn’t much of a conversationalist. Strangely though (or not given the writer’s TV background) Reacher has a great line in wit and sarcasm when forced to speak. A refreshing attribute is also that Reacher is in no way bigoted against race or sexual persuasion. The first is attributed to a career in the US Army which contains a rich mix of ethnicities and the latter probably just because he is an intelligent man.

I look forward to reading the rest of the books over the course of the year (and maybe 2017).