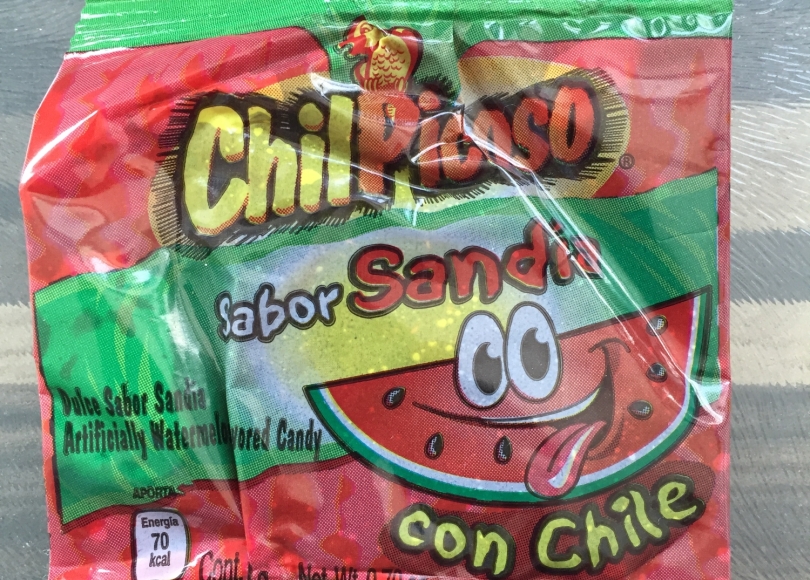 If you hadn’t already seen the photo and are not fluent in Spanish, you might be excused in thinking that ChilPicoso sabor Sandia con Chile was some obscure Spanish delicacy rather than a mass-produced ‘Artificially watermelon flavoured candy’. The chilli seems like an afterthought on the packaging but not when it’s in your mouth.

A work colleague picked a packet of them up from the airport on his way back from holiday in Mexico and I think it is a great item to base my first product review on. It sets the level of gastronomic quality at an acceptable and accessible low level. I don’t want this blog to be another poncey Masterchef style vehicle for an over-inflated ego. I just dig food of all sorts and want this blog to be fun. Some days I might write about crisps other days about a restaurant or how all lager seems to taste the same these days. It’s navel gazing at it’s extreme I guess but whatevs!

If I wasn’t so camera-shy I would’ve filmed a video of me eating this sweet. But I am, so I didn’t. Truth is, I already know how this is going to go. I have already had one at work on the day they arrived. I was curious because of the variety of moans, groans and amused noises that were filtering over the lockers between our desks and as you will learn if you continue to follow this blog I love anything with chilli in.

I plan to blog about some of the ridiculously disgusting things I have eaten as well as the good stuff. This sweet isn’t the worst thing at all. Trust me; I’ll get to that, all in good time and in another post.

One curious thing about the sweet and the reason for the second attempt is that even at normal UK room temperature it is gooey, sticky and very difficult to get out of the 2 by 2 inch plastic envelope style wrapper. About the same amount of the stuff stays on the wrapper as spreads over your fingers and everyone who had one at work had to go and wash their hands vigorously for fear of jamming up their computer keyboards.

My theory is that in Mexico the sweets are liquid and can be squeezed like strawberry jam from a carefully nipped corner of the packet into the mouth. Wasps would go mad for this stuff!

So the second attempt involved putting the sweet into the freezer for twenty minutes or so before consumption. I figured that it would be easier to get the wrapper off and it would give the sweet a better chewing consistency. I was right (for once) – the wrapper came off easy and it didn’t stick to my fingers.

Once the hand to mouth transfer is successfully completed, the magic begins. The first flavour that fills your mouth is salt. Saliva floods out and the sweet begins to dissolve into a syrupy mess loaded with chilli. As with a lot of chilli based food the effect is a slow-burner; the brain thinks ‘well that wasn’t so bad…’ and then after a delay (imagine a stick of dynamite on a slow fuse) BOOM!

The heart races, the face burns (resulting in a complexion akin to the watermelon on the wrapper), eyes water and you get that buzz that only chilli or illegal stimulants can give you.

Hence the laughter and the back-slapping at work. Disappointingly, between the salt, the sugar and the chilli there was little room for my confused taste buds to find the artificial watermelon flavour. The chilli afterglow lasted about twenty minutes for me – long enough to harden up another sweet and start all over again.

Don’t worry I’m not going to lapse into any TWSS antics on this blog. It’s fertile ground but let’s keep it clean…

My conclusion is that these sweets are produced solely for tourists to take home and amuse their friends and family – much like the papery sweets someone once brought back from Singapore airport which had the complete opposite effect of soaking up every molecule of moisture within the mouth within a nanosecond.