Located over the road from the new cinema and restaurants in Loughborough, Revolution has been around for almost a decade and is perhaps better known for its cocktails, vodka and late night music than for its food. As a result, while the new restaurants were filling up nicely for a ‪Saturday lunchtime‬, Rev’s (as it is known colloquially) was pretty much empty when we arrived. Siggy and I slipped into a booth behind the bar (we like booths) and were quickly asked what we wanted to drink. Unless we’re on holiday, cocktails at lunchtime seems excessive so I ordered a pint of Amstel and Siggy a Diet Coke.

A bit of background here. This is my first restaurant visit since creating this blog apart from the post about Nando’s which was originally intended for TripAdvisor until I found that the manager hadn’t bothered to create a listing for it yet. Also I have eaten here a few times in the past and at various Revs around the UK. I stopped eating here a couple of years ago following an incident involving a pink burger.

In my opinion, and those of many a health inspector, burgers made from minced meat should be cooked through thoroughly and not be served pink. Steak yes. Burgers no. It’s all about surface area and bacteria.

So when I bit into a burger at Revs a few years ago and found it to be pink and only just lukewarm in the middle I asked for another one, ‘but this time cooked properly’. I got another burger. Same problem. The member of staff (long gone) told me that the usual chef was on holiday and anyway that was how they were supposed to be. I asked him if he would eat it if he was presented with it and he begrudgingly said ‘no’. I told him to take it away and make sure it wasn’t on the bill. Once Siggy had finished eating and we had finished our drinks, I popped into McDonalds and got a cheeseburger for 99p.

And there ended my relationship with Rev’s kitchen… until today. Admittedly only because we couldn’t get into a nice looking indie cafe a few doors down the road. You see I intended to write a smug reactionary post supporting local traders and dissing the chains. But the cafe had no tables free, I don’t like waiting and I was starving. So off to Revs we went.

I ordered a Brooklyn Chicken burger (no prizes for guessing why I didn’t go for beef) which was made up of on trend buttermilk fried chicken, streaky bacon, smoked cheddar, fried pickles and chipotle BBQ sauce inside a pretzel bun (yeah I didn’t know what that was either) with fries and something called caulislaw. Siggy again had halloumi; this time pan fried with houmous inside a wrap with vodka salsa and baby gem lettuce with a pile of mixed leaves in a light dressing on the side.

The curious caulislaw came in such a stingy portion they may as well have not bothered and as it was after one mouthful I swapped it for Siggy’s leaves as it was mostly rocket (if you’ve been paying attention you’ll know she doesn’t like rocket). I found it far less offensive than the caulislaw. And Siggy loves cauliflower.

We asked for mayonnaise and ketchup and were quickly provided with generous portions of mayonnaise times two. It tasted like Hellmans but probably wasn’t – seemed more liquid than Hellmans. The service was great and I wasn’t in a sniffy enough mood to point out their mistake.

The fries were served skin on and pre salted which I found a little naughty. The pretzel bun was tough with the texture of a toasted bagel and I would have much preferred a brioche style burger bun instead or just a simple old fashioned sesame seed bun.

The battered pickles were something I’ve never had before and complimented the chicken nicely. I didn’t notice the cheese and the chipotle sauce was pretty subtle versus the gherkins. The bacon was a bit of a train wreck imo – damp with grease and undercooked (I like my bacon smoky, salty, dry and crispy). So finally in this deconstruction… the chicken.

The chicken consisted of a number of almost overcooked (perhaps I’d been recognised by the kitchen staff on the cctv) chicken goujons which despite their dryness tasted good with the pickles and were helped along by the fatty bacon.

The food was all well presented and Siggy liked her wrap because quote ‘it didn’t come with a load of shit’ – she didn’t want much but seemed to like my fries.

Given that I intended to write this blog post I used it as an excuse to get a pud. Of the six desserts listed I chose a Nutella fluffwich. A sandwich made of sweet sourdough (a culinary oxymoron surely?) bread slices spread with Nutella and marshmallow and served with a cold and not too sweet blueberry dipping sauce. 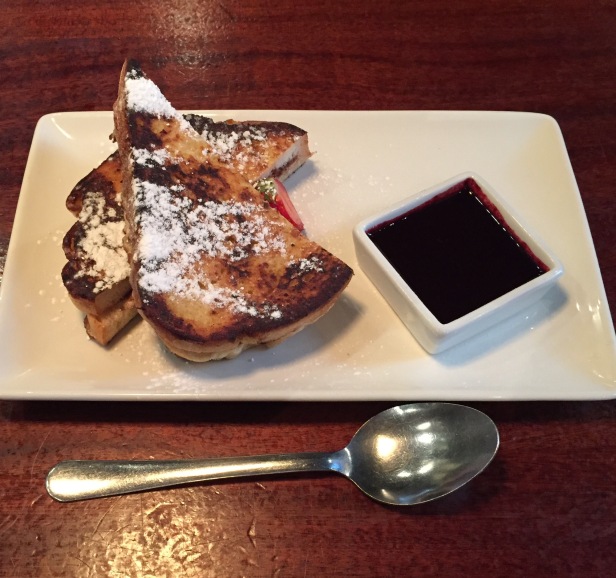 The fluffwich had the texture of my nan’s ‘eggy bread’ – bread dipped in whisked eggs and fried to perfection in bacon fat. Bless her. It tasted as you’d expect – very sweet and satisfyingly chocolatey and calmed by the blueberry sauce. I guess you could say I’m a puddings kind of guy and it certainly helped me to ask for the bill with a smile on my face (and a blob of Nutella on my chin).

I took the edge off the bill by purchasing a Rev Card for £3. It saved us over £6 on the meal and so was a total no-brainer purchase and didn’t require me to divulge any personal details like my inside leg measurement or even my email address. Among other offers it gives you 25% off food on all days except on a Saturday evening, Amstel for £2.50 instead of £4 and money off cocktails, jugs and vodka sticks.

I’m sure in the past that the loyalty cards were more expensive and you did have to give your email address out upfront, so that’s progress imo. We will certainly be going a little more often for drinks now because the cocktails will become more economical and I can always have a cheap pint of Amstel if I don’t fancy a cocktail.

The cocktails by the way are generally excellent if you can afford them, although we’re a little spoilt in Loughborough in that respect having both Kelso and the Orange Tree that serve cheaper cocktails which are just as tasty. The thing I like about Rev though is that they change their menus with the seasons and are very inventive. Today the drinks menu was called ‘Summer Love Stories’ and perhaps the music was chosen to reflect the theme too?

The sound system was playing things like ‘Santa Cruz’ by The Thrills, ‘Wheel Spin’ by The Reflex, ‘Drinking in L.A.’ by Bran Van 3000, ‘Heart of Nowhere’ by Noah and the Whale, ‘All Day Long’ by Estelle and ‘Hello’ by Adelle – so top marks for the tunes – certainly better than any of the places over the road.

Even without a Rev card you can get 50% off food on Mondays, two-for-one burgers on Tuesdays and a 15min money back guarantee on lunchtimes serving time on weekdays.

Their White Russians, mohitos and vodka sticks are recommended for evening tipples and if you want a bit of nightlife it’s probably a better venue than any of the other clubs in Loughborough – but I’m an old duffer these days so maybe don’t take my word for it; pop along and see for yourself…