My redness had gone down enough to join Siggy beside the pool today. I started reading Die Trying by Lee Child which is pretty much a perfect ‘holiday read’. I ready three quarters of it today. The temperature doesn’t seem as hot as yesterday but we hear worrying reports that a heatwave is on its way.

I had Tuc crackers, cheese spread, tomato, a peach yoghurt and some cheese and bacon flavour Bugles for lunch today. Bugles are a classic holiday snack for me and I was surprised to see a few days after coming home that Walkers have started making them for the UK market – although cheese flavour and barbecue flavour is no match for Kos’s cheese and bacon flavour.

There were a few fresh looking lemons lying around a nearby tree today so  swiped one for Siggy to have sliced with hot water. It’s not a novel thing – she’s been doing it for years but I just thought it would save a few Euro. Waste not want not and all that. Although I know very well that it was tantamount to scrumping given that the gardener would probably harvest them in the afternoon and give them to the kitchen to make their lemonade with.

I had a very nice caramel and rum chocolate ice lolly from their freezer today, a refreshing vanilla milkshake and a shit load of water so they’re doing okay from us staying in the grounds and I feel that the odd missing lemon is fine (as long as I don’t take them directly from the bowl on the counter).

We saw a lizard on our way into town this evening – your bog standard thin skittering thing darting into the weeds to one side of the tarmac once again confirming that we’re not in Kansas anymore. My bite tally is up to 6 and it seems like whenever I go out for a meal I am offering myself up as a meal to the mosquitos. It was a full moon tonight and I wondered if I would turn into a were-mosquito like some kind of BrundleFly.

We went to the elaborately named Tigaki Restaurant Beach Taverna near the beach for dinner and then had some posh cocktails at More|Meni. While we were in the taverna one of the waiters spotted me brushing up one of the numerous basil bushes they have to ward off the mosquitos. He pulled me off a sprig to take with me.

Siggy brought her phone out tonight so we were able to settle a debate about which Killers song had the lyric ‘someone is calling my name from the back of the restaurant’ or indeed if it was a Killers song at all. It’s these things that you immediately Google without much thought these days and so it was frustrating last night when it started going around in my head without any resolution. Anyway it turns out that yes it is a Killers song and it is called ‘Smile Like You Mean It’ – which was something of a mantra from me when it was current.

We went a bit loony under the light of the moon and ventured off our usual track to the Rooster Bar for a couple more cocktails. It is a very trendy bar let down on this particular night by the clientele – three Russian louts knocking back vodka shots at the bar and ogling the waitress while their girlfriends (dressed like hookers) sat around smoking like they had invented it and peering into the idiot light of their mobile phones for fear that they might have to talk to each other.

Rooster bar – actually okay when it’s not full of knobs 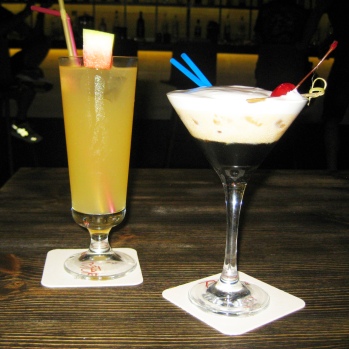 Siggy had her mobile on because she wanted to text her dad for Father’s Day. At the time I was out of contract on my personal phone and thought it way too cheeky to take my work phone on holiday. My pops had to settle for a card sent second class before we flew out and a Facebook message via Siggy.

Later we tried to watch the France v Switzerland game at Memories but it was largely unwatchable. We also noticed that much like a local radio station in the UK the DJ at Memories only seemed to have about twenty tracks that he plays in a random order each night, although following ‘Uptown Funk’ with Fleur East’s ‘Play that Sax’ (or whatever it’s called I’m no expert) seems obligatory. Not sure what was stopping him taking it one stage further down the evolutionary chain and start it off with ‘Oops Upside Your Head’.

There’s a laughable Pepsi commercial on the UAE sports channel the bar is piping their signal from which has the most awful script imaginable. I tried to write it all down but only got so far until someone at Pepsi perhaps realised it was shit and pulled it in favour of a more snappy advert. It did feature the line ‘brought together by a live game broadcast’ and words ‘cheering and winning’ and now I realise that because Pepsi wasn’t an official sponsor that they were constrained by not being able to mention the Euro 2016 tournament explicitly. Hilarious. But I guess you had to be there.

Some bars were showing the football with the sound turned down and continuing to play their usual music. When Kevin Keegan is providing the punditry I think this is entirely justified.

We stopped off at Marianna Apartments briefly on the way home to use their toilets – the men’s seems to have been a shower cubicle in a previous lifetime and was swarming with mosquitos. Apparently, in Kos, Tigaki is the most prone to mosquitos because of the big salt lake nearby. However that doesn’t explain how when I have been bitten on every other Greek island I have visited I have not reacted. Answers on a post card to the usual address.