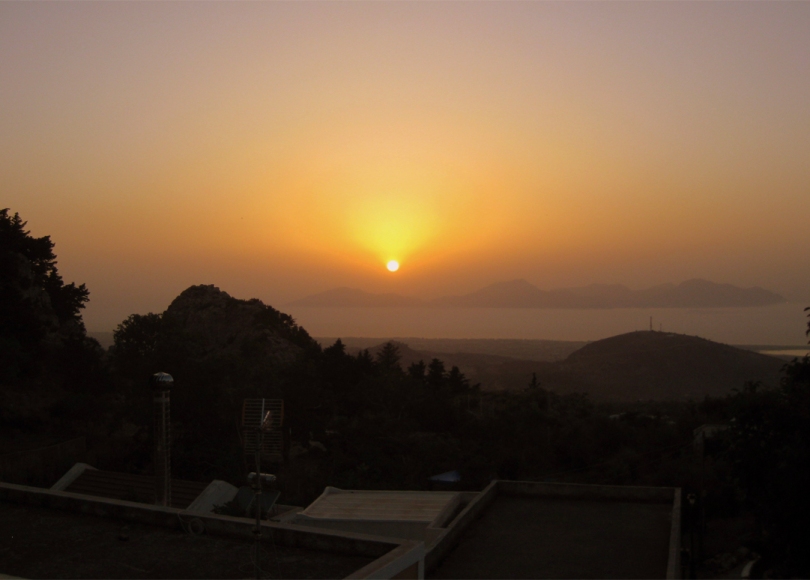 We went into town for lunch – I had my usual pork gyros pitta with chips and Siggy had an omelette followed by two huge Cornetto type ice creams from the bakery. So huge in fact that it was a race to get them eaten before they dissolved and the whole process was rather sick making. Once we were back, I couldn’t be arsed to go back in the sun for an hour before our trip to Zia so I sat on the balcony while Siggy went back to the pool.

We then had a coach trip to Zia ostensibly to watch the sunset but given that we had already done that last year I wanted to walk up beyond the village to see what lay beyond the tourist trap, to try and get an idea of what it was like before the souvenir shops and tavernas sprang up, and perhaps find the old man behind the curtain.

We walked up for a fair distance up the stony road marked as the way to Dikeo mountain. There was some farming going on up there – we saw a donkey, some chickens and a load of goats with clanging bells around their necks. There were some bizarre looking plants growing among the rocks and various bugs flying about in evening haze. 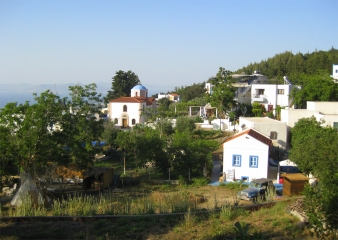 A view of a quitter side of Zia

The views were great and I was smugly happy that everyone else who had been on the coach (only a third full this year) was either tucking in to overpriced food or browsing the various tat shops. Although we are visiting before the holiday season really gets into gear, Zia was still a lot quieter than we have ever seen it, perhaps because of the football but more likely because of the awfully biased reporting of the refugee crisis last year in the UK media.

We revisited Old House Café and watched the sunset. The temperature today was supposedly cooler than yesterday but it was still damn hot and I was sweating like a 1970s BBC Radio DJ in a kid’s playground for most of our time in Zia. The chap in the Old House provided us with a big bottle of water immediately upon our arrival.

The sunset this year was bit like England so far in Euro 2016 – full of promise but ultimately failing to deliver. The weather was too hazy for anything spectacular and the very nice chap at the café actually apologised for the lacklustre spectacle. It was great to return to the café and we found it very relaxing again.

We got back to Tigaki in time to watch the England v Slovakia match at Angela’s. It was ITV commentary which was awful but better than nothing. England had most of the possession but couldn’t seem to get the ball in the back of the net. It was very frustrating and the match ended 0-0. I learned later that if we had gone a bit further down the strip that places like Memories were showing at least two of the night’s matches.

Meanwhile Wales beat Russia 3-0 to top Group B ahead of England. Go Wales! We had definitely been watching the wrong match. Did I mention I was born in Wales? I couldn’t resist waving my arms about when it was announced that we’d topped our group. Plus I had placed a cheeky £1 bet on for Wales to win the whole tournament – figuring if Greece could do it then why not Wales. Together stronger and all that…