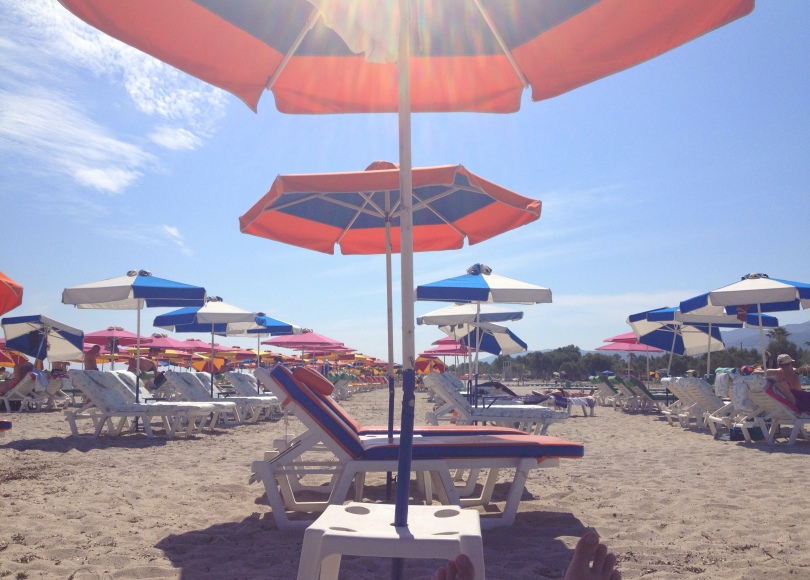 We spent most of the day on the beach again. Big black clouds hung over Dikeo mountain and threatened to spoil our fun, but the sun-bed man assured us that it wasn’t going to rain and if it did that he would give us our money back. It didn’t rain but it was ridiculously windy to the point where my cap wouldn’t stay on my head if I faced into the wind. Siggy thought this was hilarious. I didn’t.

We had lunch at a beachfront taverna called Dana which has existed since 1983 and certainly had that feeling to it, but hey Siggy liked the look of the comfy seats so there we were. I had an approximation of a Caesar salad with chicken and bacon.. Siggy had the melon and ham salad which was some melon cut into chunks with a few slices of packaged ham rolled up on top. To make up for my main I had a very good kataifi with cream and ice cream. If you’re wondering what this is let this page enlighten you. Imagine shredded wheat covered in honey.

The wind put a lot of people off today, so there were a lot less people on the beach than normal. This allowed me to catch up with some much needed sleep. Staying where we are in Tigaki is as much an exercise in sleep deprivation as it is alcohol consumption. I finished what was left of Cocaine Nights before we got to the beach and so was reading more of Dubliners which I’m finding slow going as it’s a little tricky to read given its age.

On the way back to The Mayflower we popped into the bakery and had a Snickers ice cream which isn’t as good as the ice cream bar. We also shared a chocolate croissant and a weird chicken mini-pasty, oh and there was that apple donut off the man on the beach, so we we’re hardly starving.

On the subject of food, which seems to be the entirety of this post so far (am I writing on the right blog??) one thing that bothers me about Tigaki is the seeming lack of fresh fish on the taverna menus – like Zante or Skiathos. It all seems to come from frozen and even at Kamari beach (where those chaps had gone fishing) it was the same story up to a point. There were some ridiculously priced ‘fish of the day’ options but they were beyond my wallet. The only fresh fish seem to be the ones they keep in the tanks to nibble the dead skin off your feet.

we went to Meni Restaurant for dinner because last year I had a terrible bit of duck there and I wanted to slag it off again or be pleasantly surprised – either would do. As it turned out I was pleasantly surprised and had some fish. It wasn’t straight out of the sea but it was well presented and well cooked. Anyway here’s the story of what I am calling Meni’s redemption on my other blog which features a description of one of the strangest and sweetest desserts I have ever had.

On the way to the beach this morning there was a trail of feathers blowing about on the margins of the road and we saw a turkey sans tail hiding in some tall grass by the crossroads. When we walked to mend it was still in exactly the same place. It must have somehow escaped from the farm between the crossroads and the hotel (opposite where all the fucking barking dogs are) and Siggy suggested we herd it back. I felt sorry for the critter but I didn’t think trying to herd it back to where it had been molested by a cat or some other predator was really going to be conducive to its health or to a fun evening for us. I expect turkeys are one step down from cats when it comes to difficulties in herding. I suggested that the farmer might notice one of his turkeys was missing and he could follow the trail of feathers and herd his own fucking turkey.

After Meni we popped around to Mythos Apartments bar again for a couple of expertly dispensed cocktails. We met a nice couple from Newcastle who enjoyed the nearby nudist beach. They were perfectly normal (perhaps surprisingly so for Geordies) and thankfully didn’t invite us along to get our bits sandy.

Then we had a quick drink at Rivotos cocktail bar which is just along from Memories and watched the first half of the Belgium v Hungary game. Belgium looked dominant but we didn’t watch until the end as we wanted an early night ahead of a trip tomorrow. They won 4-0 in the end, which didn’t bode very well for Wales who were playing them next. France and Germany both got through to the next stages in earlier games, beating Republic of Ireland and Slovakia respectively.

The Germany game was on in the More|Meni bar while we were eating at the restaurant and given that I knew the bar was full of Germans it was easy to work out the score by how many times they cheered (three times).

The turkey had gone when we went back. Eaten or returned to the farm. I made a mental note to check the special’s boards of the nearby tavernas tomorrow. Turkey twizzlers anyone?