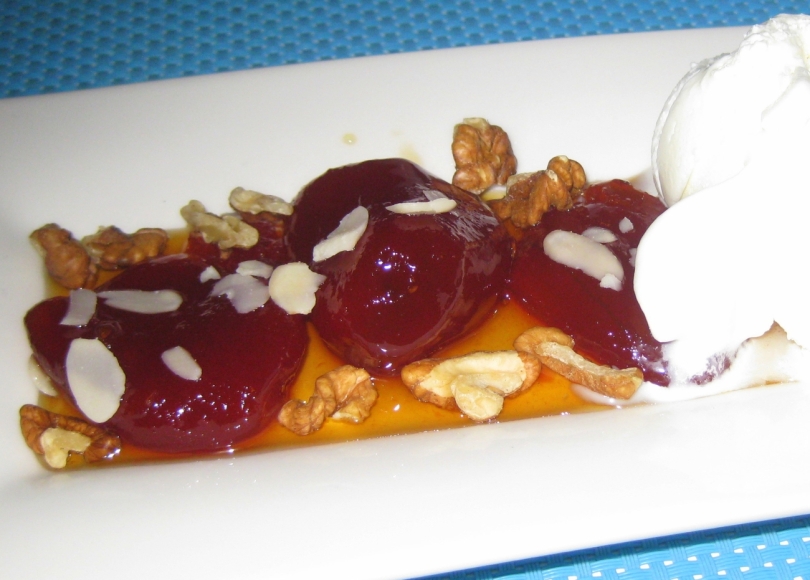 Meni with it’s neighbouring bar More is the sort of place that serves food on pieces of slate with angular knives and forks. It appears to cater for the More|Meni apartments that adjoin at the back and are mostly populated by Germans.

I was rather scathing of Meni Restaurant last year. I ordered ‘crispy duck breast with caramelised pumpkin’ which when it arrived was not crispy and had no pumpkin on it. I went as far as saying that it was the most badly cooked bit of duck I had ever eaten –overcooked on the inside and rubbery on the outside. They also got our drinks order wrong and Siggy’s moussaka wasn’t up to much either.

But I’m willing to give people a second chance and so we went back for ding-ding round two! At least I could have fun slagging it off again in this post, right? Well we were actually pleasantly surprised (and happy to see that duck was no longer on the menu).

Once I started looking properly I saw a number of fresh fish signs to disprove my theory that the only fresh fish in Tigaki were the ones kept in the tanks to nibble the dead skin off your feet. However I still suspect that most of it is frozen. The swordfish I had certainly wasn’t cooked straight from the sea, but it was comparable to previous steaks I have had and came with a twin in a typical Greek portion lack of control. My jacket potatoes were nice and buttery but the other vegetables were oddly served cold which clashed with the rest of the hot food in front of me. I assume it was on purpose because they were stone cold.

Siggy had the chef’s salad which typically includes ham, cheese, egg and thousand island dressing. Rather than chunks of the big tomatoes ubiquitous in Greek salads this one had sweet cherry tomatoes in it and large parmesan shavings as opposed to strips of processed cheese slices that most places would serve. 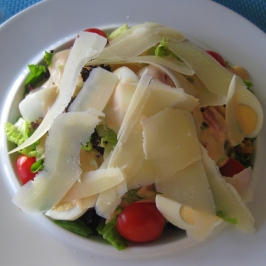 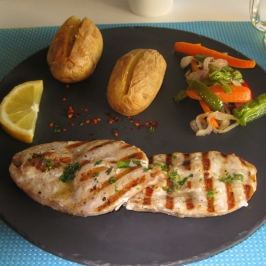 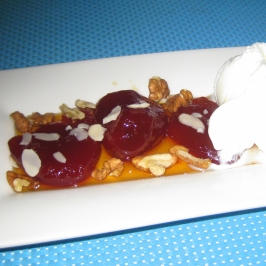 For dessert I chose a Kos speciality – sweet tomatoes with ice cream. These were rather like glacé cherries where the water in the fruit is replaced with sugar. The tomatoes were served with honey, walnuts and flaked almonds. They were super sweet and the ice cream seemed essential to avoid a sugar overload. It was akin to eating a whole strawberry from a jar of strawberry jam.

Again we got free schnapps at the end of the meal – this seems more of a thing for the German tourists than the Brits but we weren’t complaining. The bill was reasonable and I came away thinking that Meni had redeemed themselves.

In comparison to the Bar|Kitchen|Residence ‘complex’ on the other side of the road further away from the beach I think More|Meni wins – the food is better, the service is better and the cocktails are much better.