Art is something that gets people talking and divides opinion. It is after all, much like beauty, in the eye (and mind, and heart) of the beholder. And such it was with Michael Beutler’s transformation of two of the Nottingham Contemporary’s galleries and Yelena Popova’s mixed bag of art displayed in the space that was left.

Entitled ‘Pumphouse’,  Beutler’s installation is the second installment of an exhibition that began at Spike Island in Bristol. All of the original materials have been recycled to create as the blurb puts it ‘a social response to our architecture’.  Having been to a few modern art galleries in my time, I’m getting used to the hyperbole which oftentimes smacks of being composed after too many beers and access to a keyboard. In this case I kind of get it given the structures involved and the fact that Beutler had help in their construction. 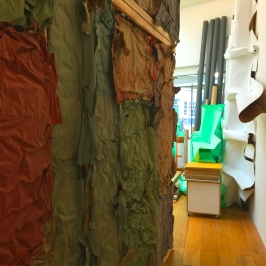 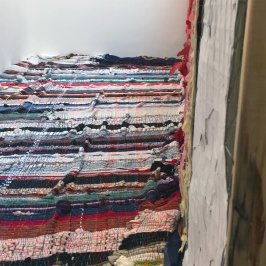 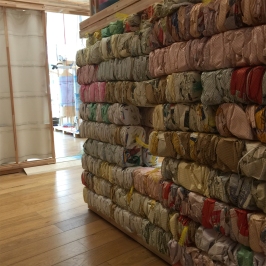 The cacophony of familiar materials and their uses is stimulating and almost otherworldly – like being transported to the interior of a shanty town at a recycling centre. The scale of the work is to be commended although to say it was rough around the edges would be an understatement but I think the art is equally within the act of its creation as opposed to the results.

The other offering in the gallery at the moment is called ‘After Image’, which is Popova’s first solo outing in a UK public gallery, she has created a number of new works. The worst in my opinion are the ‘barely there’ paintings which strain the eyes as you search desperately for any detail, meaning or value. This is supposedly a political thing but for me just presented me with an excuse to moan about how pretentious modern art can be. At least, I thought, it should be stimulating to the eye rather than just a rectangle of blandness. At least Yves Klein or Rothko had some colour to their opaqueness.

So imagine my surprise when in the next room I found myself captivated by the randomly cycling wall projection of computer generated designs based on the various denomination euro notes. It was at times almost three dimensional within a two dimensional medium. This was abstraction on a level I could connect with as it was visually captivating and a deliberate juxtaposition with the content of the previous room and certainly more thought-provoking than a screensaver or a disappeared painting. Sadly neither of the main works leant itself to photography and indeed I was unsure whether it was allowed.