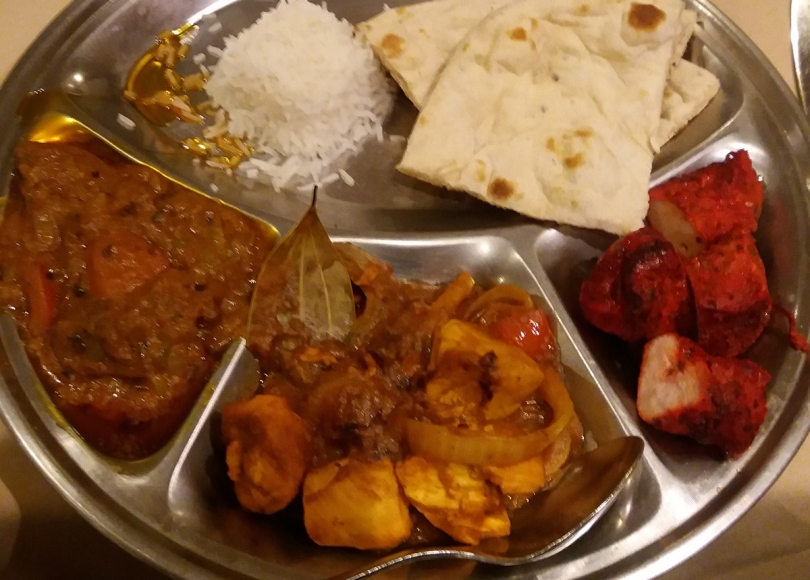 The Mugal e Shahi is one of the first restaurants I ever ate in when I first came to Loughborough back in my student daze. The place has been modernised and refurbished on a number of occasions since then and the £5 offer of a curry is a distant memory.

Back in the early 1990s we used to pile in after a night at the Union for a cheap korma and a last beer for the road, perhaps in lieu of a kebab. I remember that they employed a certain waiter for his athleticism and stamina – able to chase after people who tried to ‘do a runner’ sometimes all the way back to their halls of residence on the other side of town.

Those days are gone and so it seemed at first had the punters, runners or not. The restaurant, which smelt a bit of damp, was totally empty when we arrived at around eight o’clock after walking past many a busy restaurant to arrive there. Even Sonny’s Street Food was reasonably busy – I worry about that place – the food is great but it just isn’t much of a pull for an evening meal.

Over the road from the Mugal is the Tap and Clapper where the knuckle dragging clientele were drinking their cheap lager and watching the sport on a multitude of televisions. It’s nice that Loughborough has enough pubs for some to act as focal points for certain types while leaving others free of hassle. And if that sounds snobby I don’t really care, as I get older I’m growing increasingly intolerant of other people period.

Anyway by the time we finished at the Mugal there were two other small tables full and a group of about six others. Thankfully nobody came in from across the road.

The Mugal is still pulling the students in, but it’s a shame to see how they’ve changed. I overheard one posh knob bemoaning the fact that one of his father’s employees, when asked by him to pick up a few things from Sainsbury’s, had the audacity to ask for the money for the purchases. It seems that the majority of students attending Loughborough are Abercrombie and Finch collar-up moneyed brats. Anyway I digress…

The staff at the restaurant seemed more interested in taking takeaway orders than ours but at least we could warm up while we waited. The weather has turned very cold – to the point of your breath clouding in front of you, but the restaurant had the aircon on warm.

Eventually I felt like calling their phone number and ordering our stuff that way and then giving the address of the Mugal as the delivery point. We finally got the opportunity to order a couple of pints of Kingfisher and some poppadums and pickles. The red stuff was quite spicy with chilli and the bizarre green yohgurt a little too runny for my liking. The poppadums were freshly cooked and crispy and not at all greasy which was good.

Siggy ordered a chicken tikka mitha khodhu, because she’s obsessed with anything containing butternut squash or sweet potato, and I had a meat thali because I was starving – maybe literally (but that’s another story I may share with you later).

One of the waiters brought out a hot plate but it was stone cold so totally pointless apart from passing the time while we waited for them to clear their takeaway backlog.

When the thali finally arrived I found that there was too much nan bread and not enough rice. There was hardly any sauce to dip the nan bread into and so I resorted to dipping into Siggy’s dish which tasted like an orange korma and brought back memories of the days when I though the height of fashion was a long sleeved Ned’s Atomic Dustbin tee-shirt and jeans ripped at the knees.

The lamb part of the thali was a little oily with ghee but the meat was tasty and tender. The chicken tikka chunks were huge and also tender and the chicken curry in between them on the big metal plate was also good. The rice was boiled by my request but would normally be pilau.

Siggy’s dish contained big chunks of butternut squash in the sauce. To me it seems a rather un-Indian ingredient, but I’m not an expert in these matters. Cauliflower probably would have worked as a better compliment to the chicken, but then would that have tasted right with the overbearing coconut flavour? Anyway it’s not a dish I would have ever fancied eating.

There’s been a half-hearted attempt at renovating the toilets at the back of the restaurant – nice grey tiles everywhere, new square style sinks and toilets, but no mirrors and new plaster not yet painted and bare wooden door frames. The new plaster might explain the damp smell when we entered. I’ll assume it’s a work in progress but won’t be rushing back to see how they’ve got on.

The choice of desserts consisted of the usual frozen stuff available at all the Indian restaurants in town, and when it came to the end of the meal there wasn’t even a sniff of an after eight mint, never mind a little glass of Bailey’s. Overall the food was as usual pretty good but all the other peripheral things that make a good meal out were missing (apart from the good company from Siggy of course…).