The Boxty House Restaurant is situated on 20-21 Temple Bar, Dublin. It’s a very popular area of Dublin with numerous pubs and restaurants, and plenty of people most nights of the week. Customers are promised a genuine taste of modern Ireland with the warmth of a country kitchen down the west.

Siggy and I visited on a Friday night after being unable to get in at the Elephant & Castle nearby. Having had far too many cakes and sweets during the day we opted to just have a couple of drinks and some main dishes. Siggy opted for a bowl of Gallagher’s Irish Stew and I went for the chicken boxty. A boxty by the way is a traditional Irish potato pancake mostly associated with the north midlands of Ireland. Given that I missed pancakes on Tuesday, I thought it a wise choice. I also ordered a side of colcannon, a traditional Irish dish of mashed potatoes with kale and cabbage.

The sauce was rich and thick, the chicken a little overcooked, and the colcannon was very moreish.

The Gallaghers Irish stew was steaming hot and the soda bread very tasty.

What we had was okay. I can’t get overly excited about it and given that we paid over 50 Euros for the food and a couple of pints of Heineken I wasn’t blown away by the pricing. But that’s Temple Bar for you…

Here are the current menus: 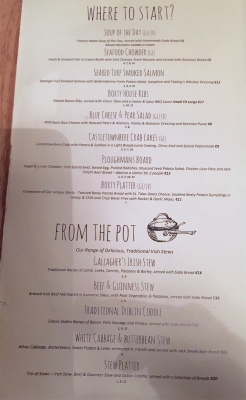 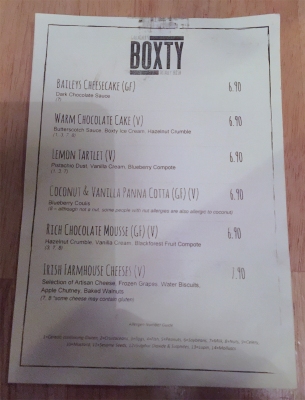