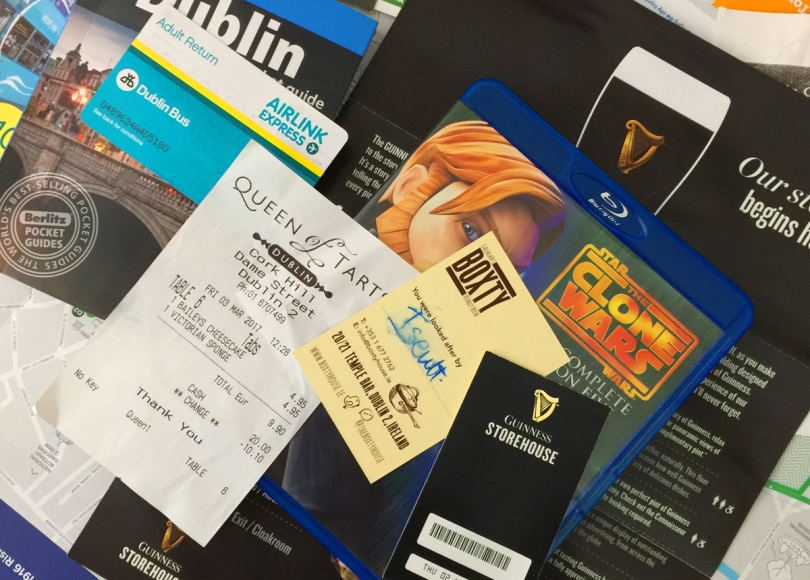 The observant among you will have noticed a gap in my rambles to cover my trip to Dublin. As well as various posts on this blog there’s a batch of reviews on tripadvisor (admittedly mostly toned down duplicates of other content). I’m now a level 6 reviewer and still in the top 2% of reviewers in the Leicester area on the website. I’m trying to see what it takes to get into the 1%. What good that does me I don’t know. You would think that they’d send you a teeshirt or something as they are basically profiting from the efforts of reviewers. But I guess Siggy and I have benefited greatly over the years from the collected reviews on the website and that is reward enough.

Before we went to Dublin (I mentioned that right?) I watched Teenage Mutant Ninja Turtles: Out of the Shadows. The film introduces the characters Casey Jones, Bee-Bop and Rocksteady so obviously absent from the first film, and sees the return of Shredder now working with Krang the crazy alien brain from another dimension. It also features a brilliant scientist who doesn’t know the difference between a decimal place and a decimal point, but can identify the four secretive heroes as turtles with no problem at all.

Once again most of the character animations are great, there’s some quite amusing bits and there are some entertaining action sequences including a great aerial sequence. Michael Bay’s go-to girl Megan Foxx reprises her role as April O’Neil and Will Arnett returns as Vernon Fenwick. Shredder and foot clan are as ineffectual as ever and Krang is soon the main focus of the TMNT’s efforts to save New York. Themes of acceptance, brotherhood and teamwork are woven into the script and the film was a whole lot more enjoyable than the original but don’t expect anything but a childish action film.

Gantz:0, available on Netflix at the moment, is a great looking 3D CG anime based on a popular manga I’ve never heard of before. The usual anime archetypes are all present – the ditzy beautiful looking girl with wobbly boobs and short hair who falls in love with the hero, the stunning girl with even bigger gravity defying boobs and long shiny hair (known as ‘Jugs’ by the controlling computer, I kid you not), an old man offering wise advice (a.k.a. ‘baldy’), a cynical teen who is too cool for school and Kato the reluctant hero who is a strapping lad with long hair, faultless complexion (when he’s not covered in blood) and equally as good looking as the girls.

The premise is tenuous at best – people who have been killed come back to life to fight monsters who are invading Tokyo – it’s like a mash-up of Attack on Titan, Pacific Rim, Edge of Tomorrow and Final Fantasy: The Spirits Within. There’s no explanation of how this all works and there’s an illogical ending, but the graphics and the imaginative monster designs and action sequences are spell-binding at times. Also very entertaining is the mismatch between the subtitles and the dialogue e.g. “Only intuitive attacks work on him”(sub) versus “I outsmarted you again wise-ass”(dialogue). Here’s a trailer with probably another set of dialogue:

Staying with sci-fi animation, the first three multiple episodic arcs within Star Wars: Clone Wars Season 5 seemed mostly like diversions from the main storyline which I knew must be coming – i.e. something to do with Darth Maul and also something to determine the fate of Ashoka. The story of the beginings of the rebel movement on Onderon, introducing Saw Gerrera who appears in Rogue One, was quite enjoyable as an origin story for the Alliance and showing the Jedi’s difficult task in following their peace-keeping ideals while still trying to protect people from harm. The arc telling the story of young jedi including a cute wookiee character was also very enjoyable and it was great to hear Dr Who‘s David Tennant voicing Huyang the droid lightsaber architect.

The next story arc about the droids was a bit too cartoony for me and felt a little too separated from the usual subject matter of the show. Although I did of course enjoy seeing a Republic Commando delivering some righteous kick-assery. I thought the continuation of the Darth Maul story arc and the way it joined up with the Death Watch story was genius and there were two absolutely fabulous fight sequences in which the animation hit new heights.

The final arc had me the most worried and intrigued (having entirely avoided spoilers) as it determined the fate of Ashoka Tano my now new favourite character. Thankfully rather than kill her off to ensure no questions over why she doesn’t appear in Episode III the writers instead constructed a well thought out series of episodes leading to her leaving the Jedi order. It was a sad moment – much like when a favourite Dr Who companion leaves the show – but I was happy that she gets to walk off into the sunset instead of being murdered. I have since read a little (but not too much) about her character and found out that she appears in the Star Wars: Rebels animated show. So I’ll get to see her again sometime.

Given that we are inside number nine of my weekly blogs it seems appropriate to quickly mention the two further episodes of the BBC’s excellent Inside No. 9. These took place inside a professor’s office and a karaoke room. The academic one entitled ‘The Riddle of the Sphinx’ centred around a crossword puzzle and the relationships between the three characters in the room (one of whom played by Reece Shearsmith turns up quite late). Alexandra Roach, best know recently to me and Siggy from No Offence, was great in the episode which was typically horrific towards the end. ‘Empty Orchestra’ revolved around the interplay between various work colleagues on a leaving do and was interesting not only for Tamzin Outhwaite’s bitchy performance but for the portrayal of a deaf colleague by little known Rebekah Hinds. Consistently excellent stuff.

Also on the BBC, the final episode of Taboo was a pretty satisfactory finale to a very satisfying series. It’s nice to read that it’s very likely there will be a second series.

Also from the Big British Castle, I found the Adam & Joe podcasts on BBC iPlayer Radio. Although it’s some years since they were recorded from their Radio 6 show, they don’t sound too dated and I love the way they bounce jokes off one another. Here’s one of their XFM podcasts on YouTube as a bit of a taster (although I think the earlier ones are funnier):

In terms of tunes I was happy to get alerts from Spotify letting me know that new songs by a couple of my favourite female vocalists were available for me to listen to and anticipate new albums from both of them.

‘Liability’ by Lorde is a very straight forward sounding song with some Beatles chords hidden away in there. The lyrics are touching and it shows that she has emotional range. ‘Green Light’ by Lorde is more in keeping with her previous tracks and I love the “oh they bite you…” quick lyric delivery which reminds me a little of Kate Bush. The tune builds into a thumping pop tune with electronic piano, but of course it’s her vocals that I like the most.

‘Ocean’ by Goldfrapp starts off sounding like Yazoo, and goes through Eurythmics and Depeche Mode phases before the track is finished. Again the vocals are brilliant. I love they way the tune crunches around them like waves crashing on a shore line and the way her vocals are used as an additional choral instrument, sometimes distorted and sometimes untouched by electronic jiggery-pokery; it’s powerful stuff. ‘Anymore’ by Goldfrapp is a rather simpler pop song in comparison, with disco roots reminiscent of 2005’s Supernature album.

For reading, I took Tomorrow Never Dies by Raymond Benson to Dublin with me and finished it off this week. It’s one of those pretty awful ‘based on the screenplay of the major motion picture’ books released more as a promotional item for the film than as a valid form of entertainment in its own right. But it fitted nicely into the side pocket of my cabin bag and was lighter even than a Sharpe book. The Stephen King book I started reading was definitely too big and heavy. The story, even when it was added to by Benson, was a quite poor and some of the language used, especially during the more sexy scenes, is laughably bad. I don’t think it’s a reflection on what readers found acceptable 20 years ago (when the book was published) and more (I’m being generous here) an attempt by Benson to capture Ian Fleming’s original style when he write his Bond series.