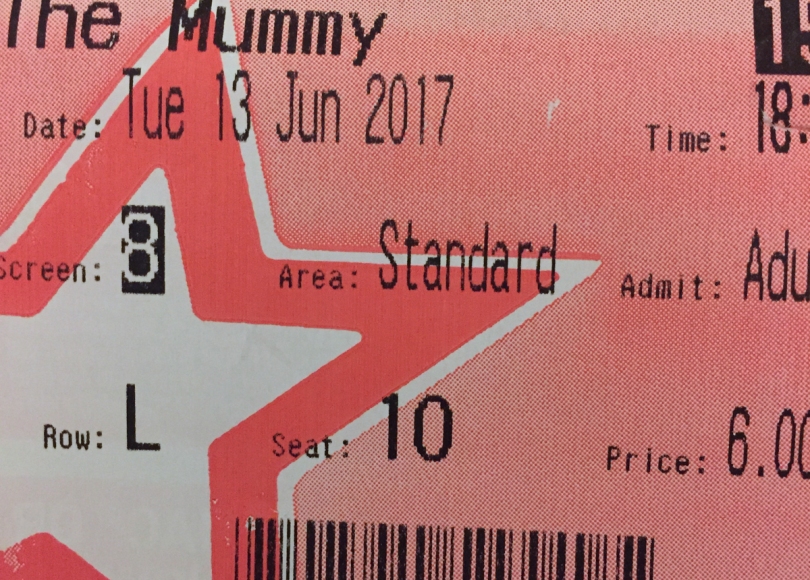 So after being pretty down on Wonder Woman, you probably expect me to tear The Mummy a new one, right? Well maybe, but… If you go to the cinema expecting a film to be fucking awful and it turns out to be quite entertaining then this is the kind of review you write the next day. So get as much bloody popcorn as you want folks and, sure, talk all the way through the film, check your phone if you want to, because with expectations at rock bottom there was only one way this viewing experience was going to go and that was up!

Hot on the heels of Wonder Woman, Biggles and I went straight after work to see The Mummy in 2D. If you’ve read any of my posts about cinema visits you’ll know that 3D is a big no-no for me. In this case I also didn’t want to pay extra for what I was expecting to be a giant turkey. We saw it with only about twenty other people in a massive cinema and still managed to be bugged by a bunch of dickwads chatting through most of the film.

In some ways this film is indeed a massive gobbling turkey of the largest proportions, fit for a Thanksgiving or Christmas feast, but the thing is I actually left the cinema a lot more stoked and buoyed up than I did after Wonder Woman (and I’d been at work all day and hadn’t had any dinner, instead of being fresh out of my weekend bed and full of cereal, so go figure). The main reason I think was even though this film is full of tropes it is fast-paced action-packed, a huge amount of fun, humorous throughout and with great creature effects and fight scenes (maybe apart from the one with cockney fat boy Mr Hyde).

So with all that in mind here is why I think a lot of people will think this film is a steaming pile of doggy doo-doo. First the lead female actor is awful, the script is awful and the plot is woefully derivative. Oh and also Tom Cruise is just Tom Cruise all the way through. So not too bad eh?

Annabelle Wallis plays Jenny Halsey the female side kick to Cruise’s Nick Morton; Hollywood-script-writing-computer generated names if ever there were. She somehow gets to deliver all the bad lines and most of the crappy expositional stuff, and she does so woodenly – as if she knows that the film is awful, but Tom is so enthusiastic about everything she just has to play along, and come on it’s got Tom Cruise in it and Russel Crowe and that funny guy out of New Girl (his name’s Nick right?) so really how can it possibly flop? She makes Tom Cruise in comedy-action-mode look like Laurence Olivier.

The script is terrible in places – characters come out with stuff like they used to do on The X Files that no person would ever say in real life and the amount of explaining to the audience what’s going on is phenomenal, as if we’re too dumb to get it. Yes the dagger won’t work right if it hasn’t got the red jewel in the end of it – we know that already, no need to explain it. Yes the sarcophagus you just found it a really important find, we understand that implicitly, you don’t need to tell us over and over again. Jeesus Jenny!

The plot seems to be a mishmash of elements primarily from American Werewolf in London, Queen of the Damned and Indiana Jones and the Last Crusade. A comedy zombie sidekick giving advice to the lead character, a thrall commanding Queen from the past brought back to life, and an ancient artefact able to help resurrect a dead lead character, crusader tombs, rats, underwater scary stuff, seemed all too familiar to me.

However, I was willing to let these things ride and enjoyed the film a lot. I thought the pacing (unlike Wonder Woman) was great, the action sequences (especially the plane disintegrating) were excellent and the way the fight sequences (especially the ‘big hits’) were filmed were great. Did I think it was as good as Wonder Woman? No probably not, but it wasn’t close behind imo, warts and all.

I’m also happy to hear about Universal’s ‘gods and monsters’ plan to create a dark universe to emulate the success of the Marvel and DC films. I thorough enjoy Penny Dreadful on Sky, and was glad to see the inclusion of Dr Jeckyll/Mr Hyde in The Mummy which kind of let people know what to expect in future films, indeed I smiled when Crowe actually says ‘welcome to a world of gods and monsters’ at one point.