The wind was coming from a different direction this morning, was not as violent and was cooler. Strangely, although we arrived at the beach later, less towels were already down on the loungers and so we got our preferred spot on the end of the back row (basically where the level of annoyance from other people is theoretically minimised). Perhaps the beach ninjas had departed from the hotel. 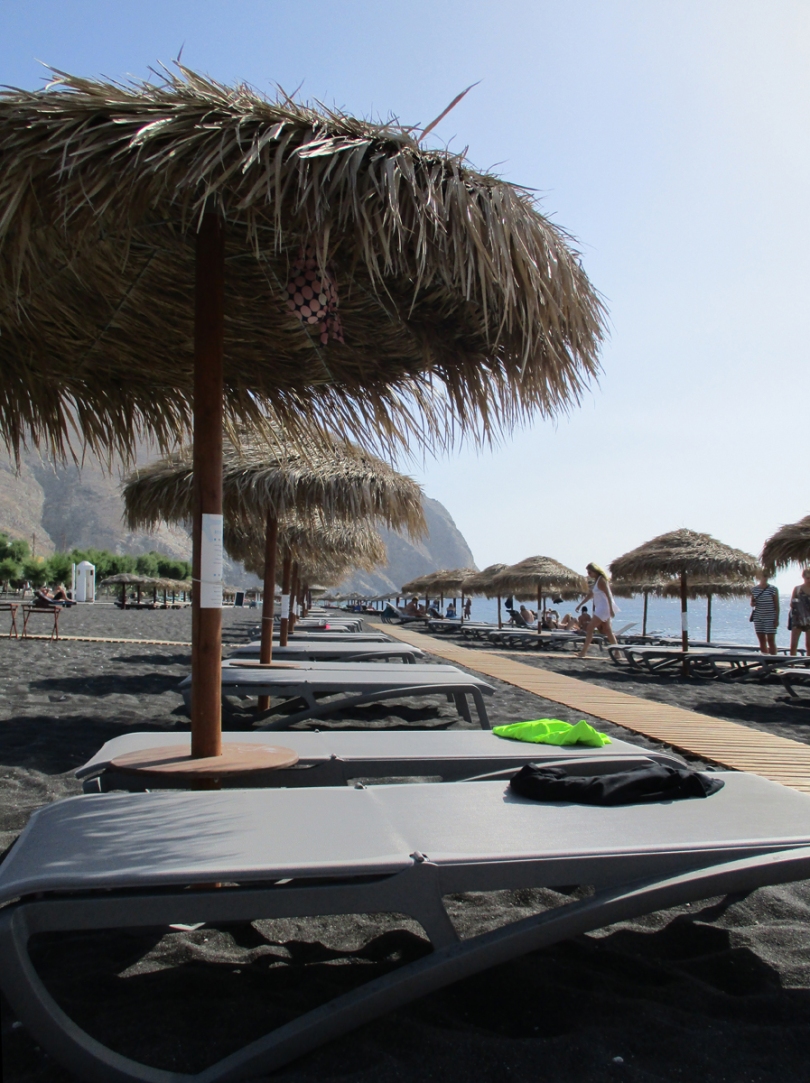 The sea was a lot colder today than yesterday too, but it was still a refreshing cooler from lying in the sun too long. There’s a sharp rate of decline at the waters edge so that, unlike at Tigaki last year, the water is up to your neck within a few strides. I sat at the water’s edge and let the waves splash against my feet and up my legs. This was to have an unwanted side effect later on in the day.

The wifi at the hotel wasn’t working until around six after the spate of power cuts last night, but it is a luxury we’ve not really had on other holidays before so no great loss.

We went to Cremeria Vienna again for lunch. Bananas and yoghurt for Siggy, banana split waffle for me with a rich chocolate ice cream. It was great.

After lunch we went in the sea again and then just chilled out. I read a bit more Asimov and had a Snickers ice cream bar and various drinks. Nothing of any great import happened which is exactly what you want on a beach holiday I guess.

Some American jock types dicked about helping a blonde cheerleader type do backward somersaults off their shoulders into the sea, but she didn’t drown and wasn’t eaten by a shark.

There was a bit of excitement about five minutes after our afternoon dip when a couple of rogue waves twice normal size blasted into the beach sending people flying off their inflatables and knocking people off-balance with a cacophony of wails and shrieks. And still no one drowned or was eaten by a shark. I guess it might have been the wash from a cruise ship, although you don’t tend to see them on this side of the island.

Back in the room I dropped my beach shorts to go and have a shower and filled the room with tiny black pebbles that had washed up my nether regions in the morning. My scrotum looked like it had been bejewelled with black diamonds. How I failed to notice the extra weight I was packing in my shorts will remain a mystery. I took me feckin ages to clean up before Siggy got back from the hotel gym. And no I haven’t been yet and probably won’t.

We returned to Pergola restaurant next door to our hotel for dinner. I had the mixed grill and Siggy had stuffed burgers. I had forgotten what generous portion sizes they dish up. The mixed grill was fucking enormous and impossible to finish. It featured three chops, a burger, a big chicken steak, a village sausage, pitta, tzatziki and a huge pile of chips.

I left most of my chips and I expected protein sweats on top of normal heat related sweats tonight. The waiter looked disappointed but I was sure my GP would’ve approved. The waiter, who was a borderline Andy Serkis lookalike, told me that a few years ago someone had eaten a mixed grill for two and some of his wife’s carbonara. The waiter had lost a bet for a large beer that may have spurred the greedy bastard on, but still… We had a tasty square of strawberry cheesecake gratis with the bill.

We enjoyed some umbongo flavoured cocktails (Tropical Cachaca) at Yazz again with the blues and rock guy Billy Brown doing the live music. Among other things, he did his own version of Carlos Santana’s ‘Maria Maria’. He has a keyboard and drum machine to help him, as he said ‘it’s like a fucking cockpit here’, but his talent is with his blues guitar (a 1959 stratocaster with custom pick ups) and vocals.

The guy behind the bar making the cocktails was wearing a tee shirt with the slogan ‘I have no idea what you are talking about’ which we thought was great although as you’d expect most of the customer-facing people in bars and tavernas have very good English.

In side street shops not so much – we went in search of beach towel clips today, after one fell apart in my hand yesterday and the replacements I bought were a bit on the small side, and had to go through a series of charades and object rejections until we arrived at the correct required items. We know about eight Greek phrases none of which are ‘do you sell beach towel clips?’. The packaging said ‘pins’ rather than clips or pegs which didn’t help.