This was our last proper day in Perissa. I had an awful night’s sleep thanks to noisy neighbours, the heat and the mixed grill burning up in my stomach. But Siggy’s mantra this holiday, as with every holiday, was ‘sleep on the beach’, and so there was no lie in this morning and instead I went through the established routine like a robot and found myself drinking warm acidic orange juice and eating a Danish pastry at about 8:30am. 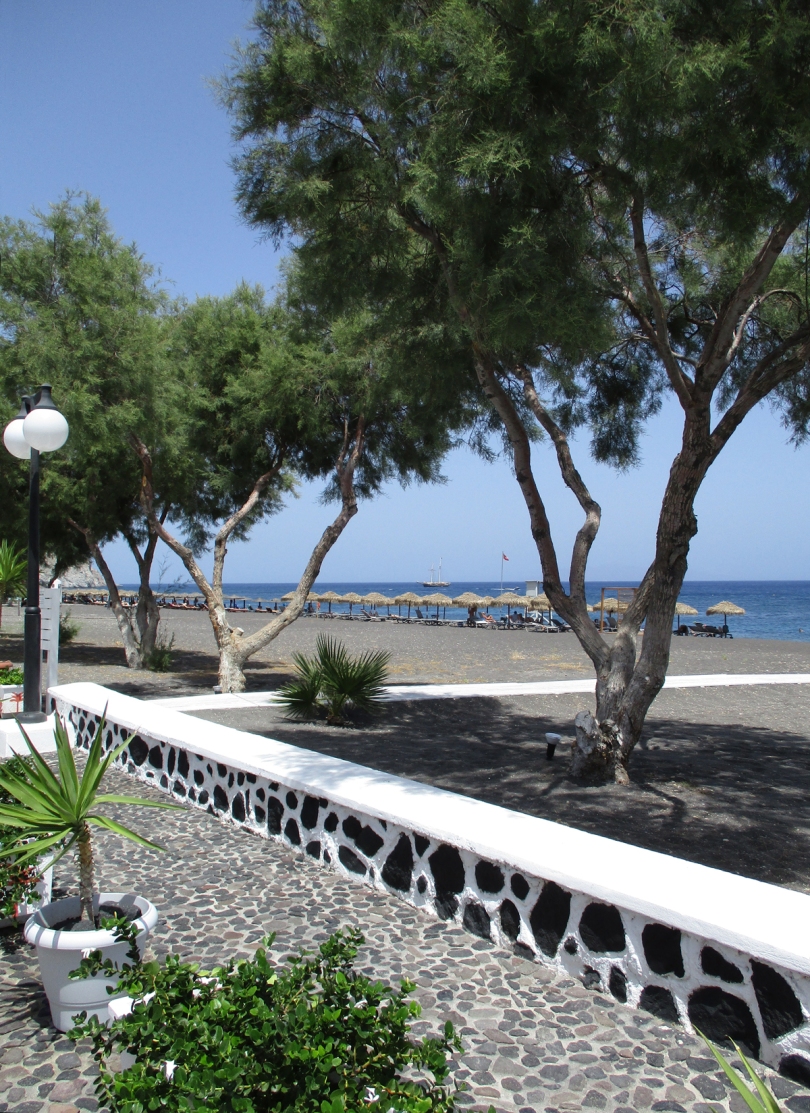 Thankfully the heatwave had ended and the cool wind had picked up considerably since yesterday. So much so that the sea did not look at all inviting. It looked very choppy.

We went to Chocolate creperie two doors down from our hotel for lunch. I had a lacklustre Santorini salad and Siggy had a pitiful cheese toastie. However, we had the best vanilla milkshakes we have had all holiday there. They were smooth and creamy and not at all icy as others have been. I’m sure if we had sampled one of the many crepes they do there (the menu has pages of them, mostly centred around what other toppings go well with nutella) that I’d be waxing lyrical about them, so I’m not going to dismiss this place as a good lunchtime venue.

After that, I retreated into the shade of the umbrella and finished reading the Asimov book. The bookshelves in the hotel were still sadly lacking in anything in English that appealed to me. I did see someone today reading the George R R Martin book I brought and so I feel as though I have contributed to improving the hotel’s ‘book bank’ some.

I resorted to digging out my phone and starting to type up this post up. I have two books on Kindle that I have not read yet and the reader app on my phone, but there are a bunch of noisy East Europeans (maybe Russians I’m not sure) nearby now which means I’m probably not going to be able to concentrate.

For dinner we made our third trip back to Noma for a repeat of the half and half Puttanesca/Classica pizza we enjoyed so much the first time we visited. Apple crumble for dessert (more like a slice of apple crumble pie).

Then it was Radlers at the Beach Bar. The refurbishment to the main building appeared to be almost complete. Lots of white paint and varnish, empty bottles and bamboo. Some of the music they play is very odd – old fashioned jazz or crap cover versions the worst tonight being a reggae version of Iggy Pop’s ‘Passenger’.

Then at Yazz the electro band again mashed up Chris Isaacs ‘Wicked Games’ with Depeche Mode’s ‘It’s No Good’, then they covered Portishead’s ‘Glory Box’, Sia’s ‘Titanium’ among others and then back to Depeche Mode for ‘Enjoy The Silence’ again but without the awful singing. Basically same set as previously. ‘Nothing Compares 2U’, Bronski Beat’s ‘Smalltown Boy’ and a very good version of ‘Sweet Dreams’.

Siggy enjoyed a banana daiquiri for Siggy and I had another Tropical Cachaca, then it was back on to Radlers. It’s a toss up between Radlers or the Cachaca for drink of the holiday.

Celebrity lookalikes today: Penelope Cruz (waitress in Chocolate creperie) and Drew Barrymore (waitress in Yazz that we’ve seen most nights and only just realised). The dispute continues over whether one of the waiters in Noma looks like Leon (Samuel Anderson) from Channel Four’s Loaded.