It was great to have the opportunity to return to the Hammer and Pincers in Wymswold to eat their ten course grazing menu again. We found that it had changed in a few places and this time we chose to have the specially selected drinks with each course. So with no further ado let’s crack on and go through my impressions dish by dish. 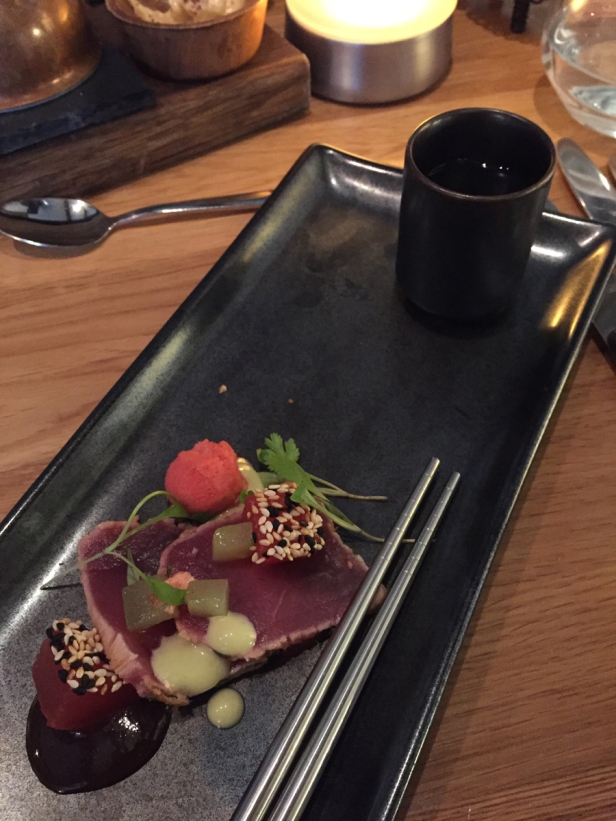 Light tuna, little blobs of hoisin, sorbet and a mild wasabi flavour served with sesame seed topped watermelon cubes. The fish was gently seared on the edges and melted in the mouth. Siggy unfortunately doesn’t like wasabi and so I had most of hers too. Plus she didn’t like the sake much either. It provided a harsh dry sherry-like counterpoint to the fish and I could’ve happy had a few more shots.

As usual the service and presentation were excellent, and we found the maître d, who looks a bit like British actor Toby Jones, even chattier than previously and providing some useful insights into the food. 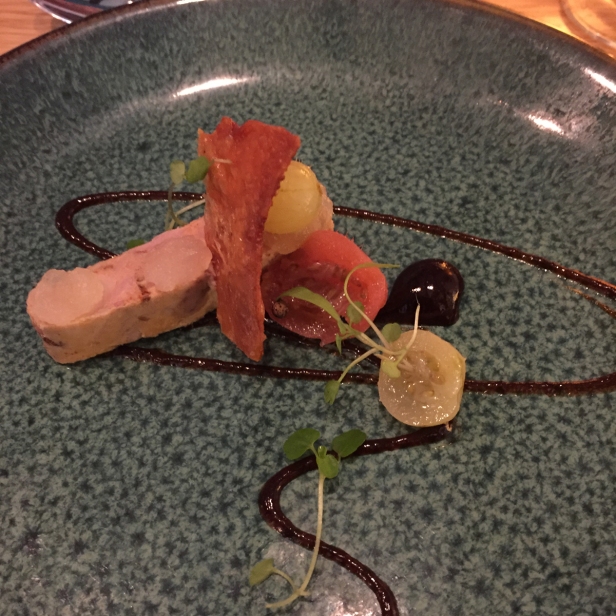 The Pineau De Charantes, was very sweet tasting rather like dessert wine and was a great choice to counter the sourness of the gooseberry and grapes served with the chicken confit. The shard of crisy chicken skin was a nice touch and I just wish there had been more of it and some of their excellent walnut and raisin bread that we had while we were waiting for the first course. 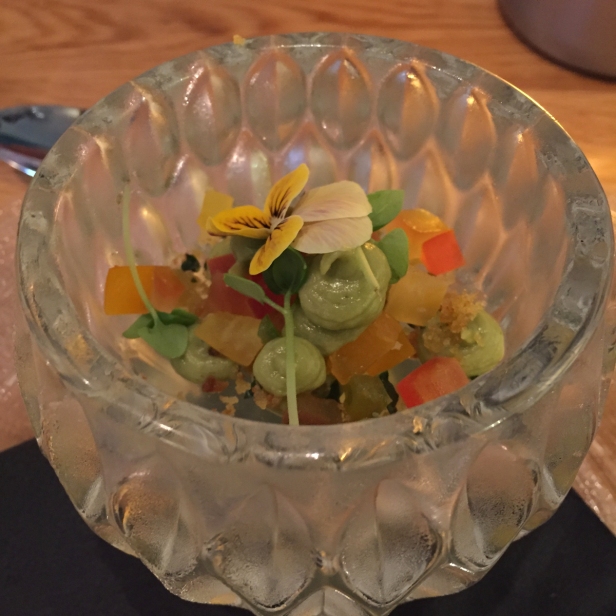 The white wine was dry but very fruity and I recall it being quite a popular choice when I’ve been out with colleagues in Oslo. It took my rather confused mind off the strangeness of the third dish on the tasting menu.

This was a transparent tomato flavoured jelly served in a glass dish, which looked more suited to containing a tea light candle, with unusual little crunchy bits, tomato and avocado purée. There was a nice fresh basil flavour too. However, I just couldn’t get my head around eating a transparent jelly with a savoury flavour. I’ve only encountered it in pork pies and it’s better in small quantities stuck to pastry. Despite the trimmings served up as the core of this dish, it was a bit too wacky for me. 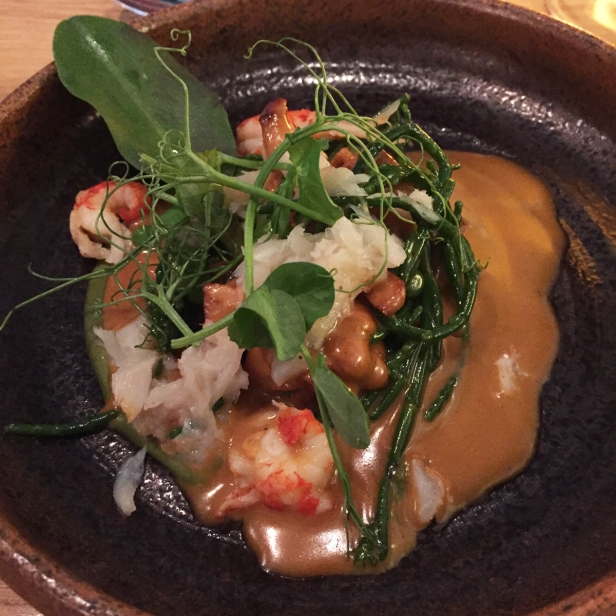 The drinks appeared to be coming in increasing larger glasses, but with the amount in the glass remaining at safe levels so we weren’t totally wrecked by the end of the meal. The white wine was quite a dry white again but very pleasant. Sorry, I’m not much of a wine buff these days and as long as it doesn’t taste of vinegar I’m usually quite happy. I prefer red, but can understand that its not suitable with a lot of dishes.

Last time Siggy didn’t eat the crab course and I was quietly hoping that she’d turn her nose up again at this version, but as it happened she was very happy to eat it all. I think this was because the crab was rather overpowered by the rich gravy-like sauce. Served hot the dish was great and the samphire tasted like it had been picked minutes ago. Again I was left wanting more. However, I think I enjoyed the previous version of this stage in the grazing menu more – perhaps because I got two helpings 🙂

While we were eating we listened in on a conversation on another table about $6000 Rolexes, but that’s another story entitled ‘How the other half live’, that won’t be told here. By the way, we weren’t paying for the meal in case you were wondering, and that’s another story that will remain untold. Suffice to say, I’m not sponsored by the restaurant – my views and amateur foodie ramblings, as ever, are wholly independent. 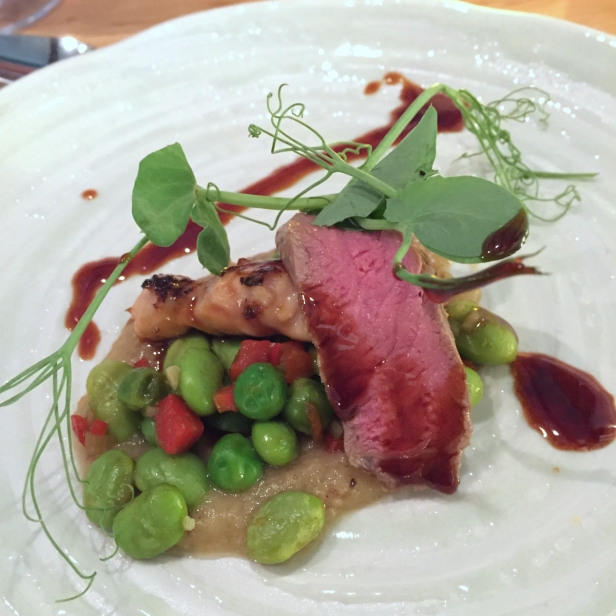 I love red wine from Chile and this was no exception – it was dry again with a vanilla bouquet and some rather indescribable complex flavours. It had seemed like the dishes were arriving too quickly in comparison to our first visit last year, but once the place got reasonably full, things slowed down to the expected pace.

The peas, pea sprout and beans were very nice with a little bit of mint nice and a good reduced sauce served on a hot plate. I’m a stickler for a hot plate me. I think it could’ve done without the sweetbreads which a bit spongy/stringy and hard to cut even with a steak knife. Again I think the execution was better last time and would’ve happy forgone the sweetbread for another slice of delicious lamb.

CUCUMBER ~ DILL ~ LIME and Rekorderlig Cider from Vimmerby, Sweden (the only drink on the list I’ve had before, lol). 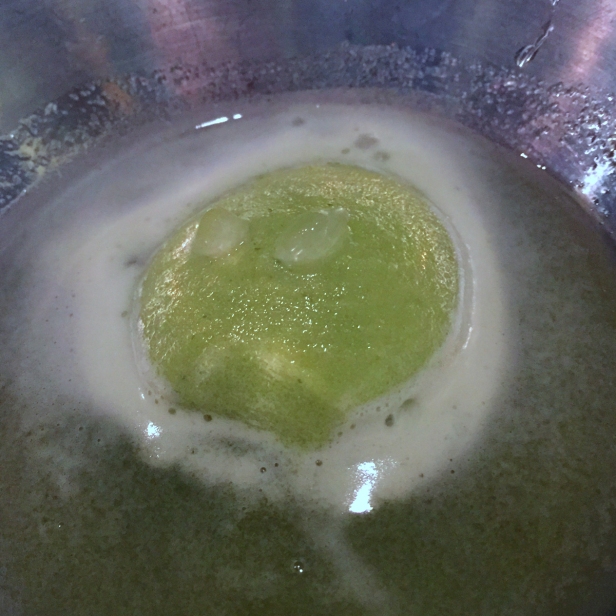 The sorbet was great last time and great this time and so much better with the cider in the metallic martini glass style dish. Amazing flavours. 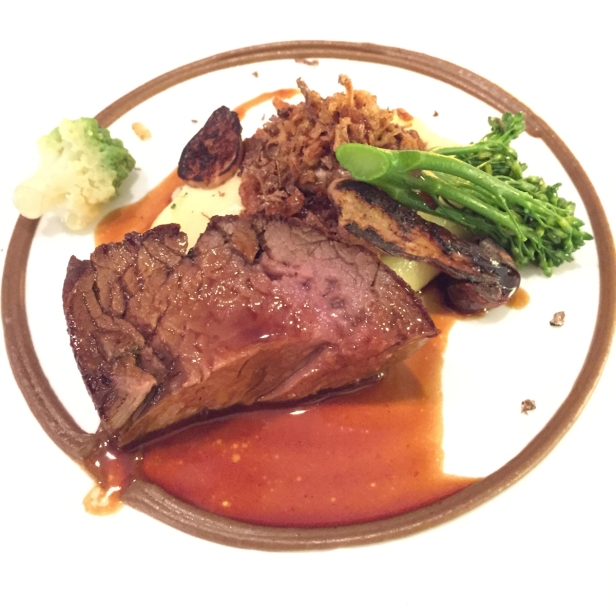 The shiraz was a robust peppery wine and the perfect compliment to the red meat. The beef was the stand out dish last time and I felt like it was what all the other dishes had been building up to this time around. Again it was excellent and a nice touch was the little pile of  shredded brisket on top of the buttery mash. Everything on the dish was cooked to perfection. Again I just wanted more of everything, and if we return for a normal meal here some time, I’ll be choosing the beef as my main. 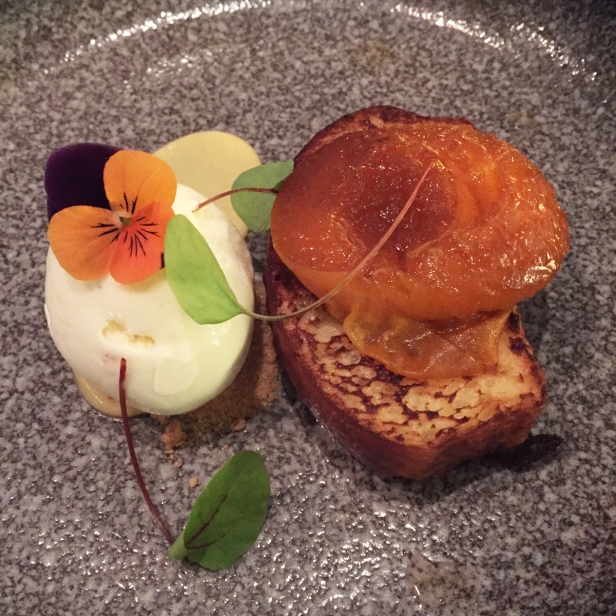 While we were waiting for this course I noticed that they have over 30 types of gin on the drinks menu and some good looking cocktails. We were holding out to see how tipsy we felt at the end of the meal before ordering any extra drinks.

I think the apricot had been poached in elderflower juice and then finished off in a pan before being served on soft toasted brioche with a buttery eggy bread texture. I don’t know how these textures and flavours are achieved – some kind of magic I guess. There was a surprise in the form of a thick smear of lemon curd which went well with all the other components of this dish. 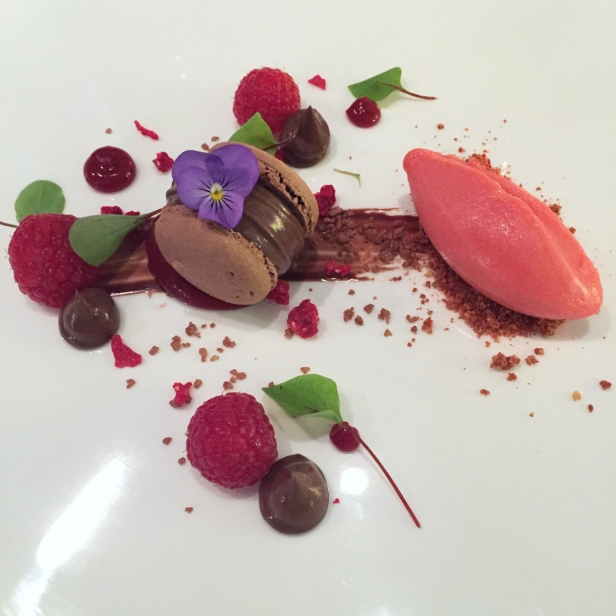 The Mudigliza Mauri, a fortified wine very close to a port with plum and cacao bean added to go well with the chocolate, was served chilled. It was excellent and better than the port we got with the next dish.

This dish got 10/10 for presentation and the same for taste. There was a cheeky bit of popping candy under the macaroon sandwich of luscious hazelnut chocolate and the raspberries and sorbet complemented the richness of the chocolate very well.

The next dish was supposed to be Stilton served with quince jam, but at the start of the meal we made it clear that (a) Siggy doesn’t like Stilton and (b) although I like it, it doesn’t like me (it gives me rotten migraines). So the maître d let us choose our cheese off the cheese menu.

CHEESE ~ QUINCE served with Neeport Tawny Dee, from the Douro Valley in Portugal. 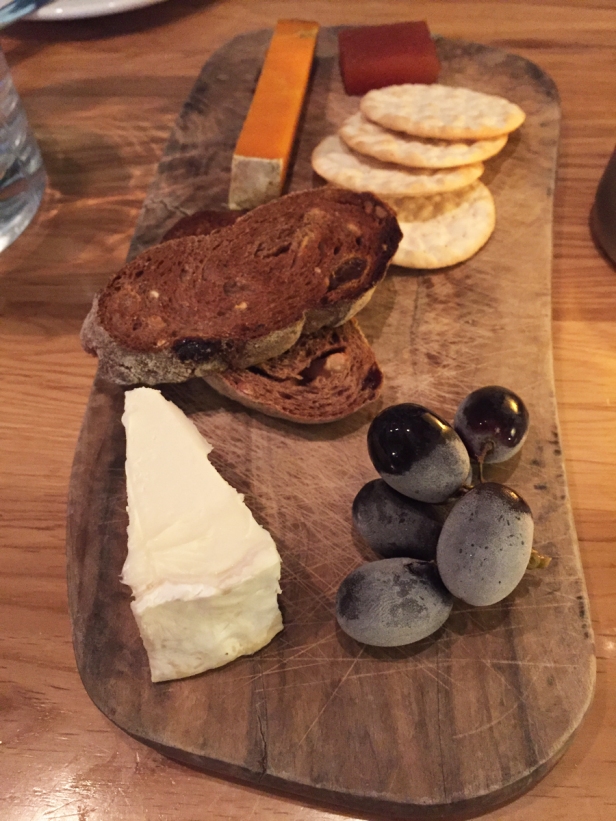 We swapped out the Stilton (which I’m sure is very fine) for some fancy Brie and Red Leicester, and we were happy to see the return of the walnut and raisin bread in toasted form.

The brie had been matured for 6 weeks and was quite gooey – reminding me of the cheese shop sketch by Monty Python sketch in which the excuse for not having any in stock was the cat had eaten it. The Red Leicester had been aged for months (quite how many eludes me) and was seriously nutty in flavour. I only had a little corner as it’s really any mature cheese that will kill me off. I was risking it with the brie to be honest, but it was the mildest on the list.

Along with the cheese, bread and crackers were some frozen black grapes and a very solid square of quince jam which my closest comparison is seedless strawberry jam.

Then, after the magnificence was over, we passed on coffee and went for a couple of cheeky cocktails. I had a Brass Monkey, mainly because I’ve never had one and I love the Beastie Boys song, and Siggy opted for a Strawberry Daiquiri. Both were very tasty and mine in particular seemed to have been mixed in the Greek style – i.e. a shit load of alcohol and not much fruit juice – just the way i like it, ah ha, ah ha… 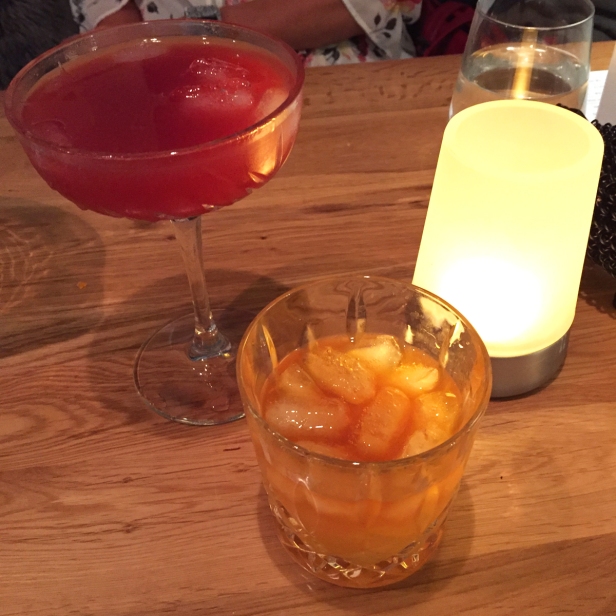 We met the wife of the head chef while we were finishing up and I seriously cannot fault their customer friendly atmosphere. They are also very happy to let you know all about how the food ingredients are locally sourced. I could reproduce what I read at the table in my own words, but I’ll save time and just put a couple of images in for you to read (I’m sure they won’t mind): 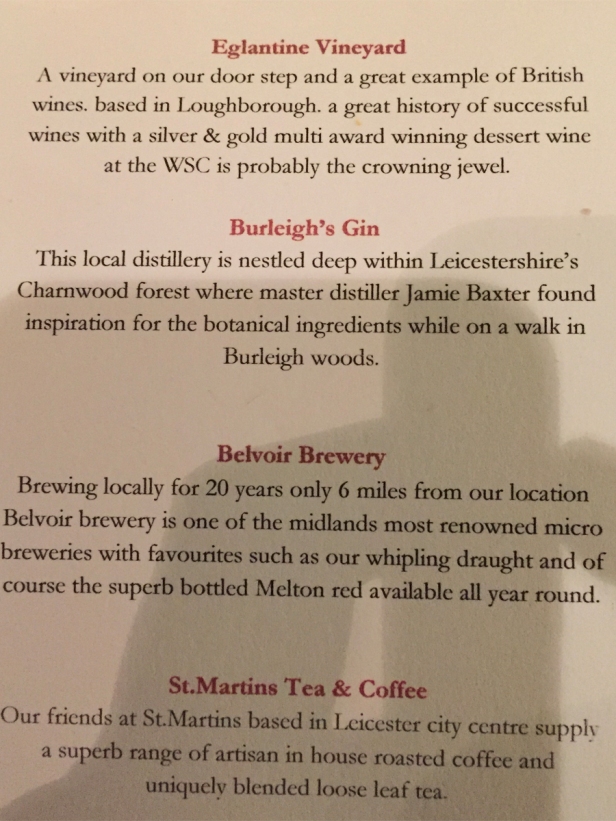 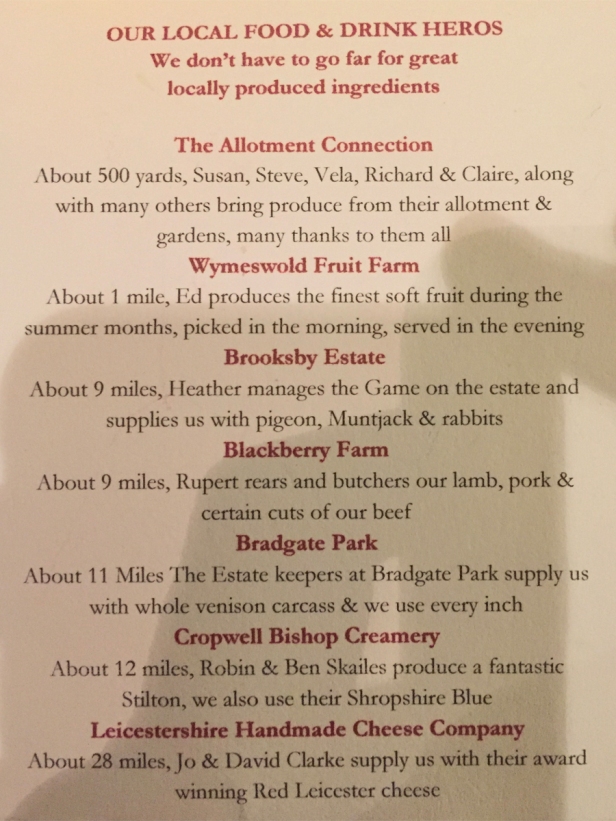 So the award winning Red Leicester cheese is properly local for instance and you can’t get more local than the allotments in Wymswold and the fruit farm.

This was another excellent meal and what the ‘Eating and drinking’ tag within this blog has been crying out for. Hopefully I can save enough pennies to pay for a return visit some time later this year to celebrate my birthday. We’ll see.