I started reading The Hare with the Amber Eyes by Edmund De Waal yesterday. I picked it off the shelf, rescuing it from chick lit drivel and Andy McNabb types. I continued reading it today. The cover is sticky for some reason and it’s rather arty farty but I like the way De Waal conjures up images of life at the turn of the century in pre-war European cities.

We finished packing and then had a pretty normal morning doing nothing at the poolside. I had a last gyros pitta for lunch and Siggy had another sausage pastry. To avoid the ever-annoying wasps we took a walk towards the sports bar and ate as we went. There’s at least five flights back to the UK leaving Skiathos today (we were on the last flight), and with Troulos being mostly populated by English tourists the street seemed very quiet. We showered in the facilities on level 2 and then sat by the bar for a last vanilla milkshake.

The transfer and check in went okay – for once the departures area was quite quiet and cool. No nutters getting angry over nothing and no getting off the coach too early and realising our luggage was still on the coach. My how we laughed.

Time would tell if there was Santorini style airport chaos beyond security. We went to the nearby Taverna for a couple of Diet Cokes and some water. Siggy started off in the wrong direction when we left the airport, I pointed out that weren’t in Kos and that the Taverna was on the left up the hill, not directly opposite.

Siggy typically moved her seat to sit in the sun while I sat and watched tiny ants on the wooden table top fighting over a crumb, while a Greek version of ‘I Like To Move It’ – Siggy’s alarm clock tune on her phone that woke us up at eight this morning – played on the Taverna’s radio.

Then we went for a little walk down to the water at the bottom of the runway on the off-chance that we might see a landing. Unfortunately we didn’t get to see one before it was time to walk back. 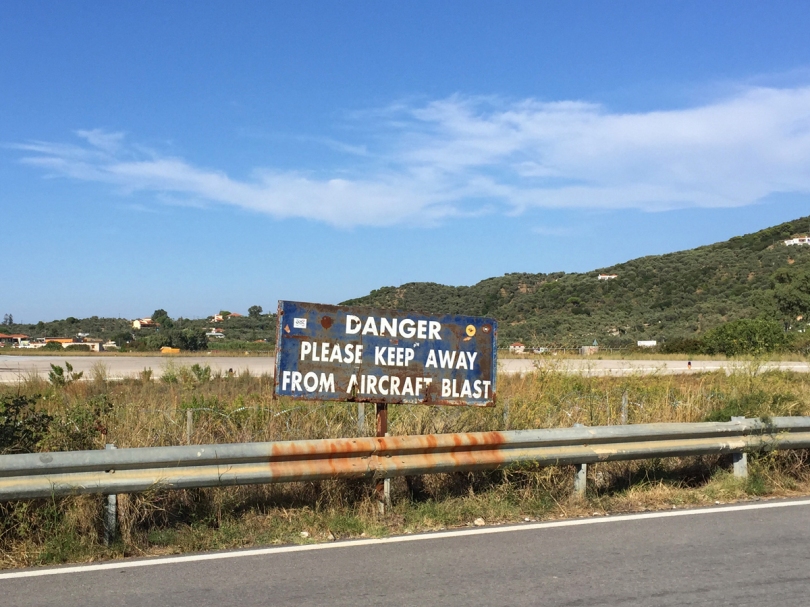 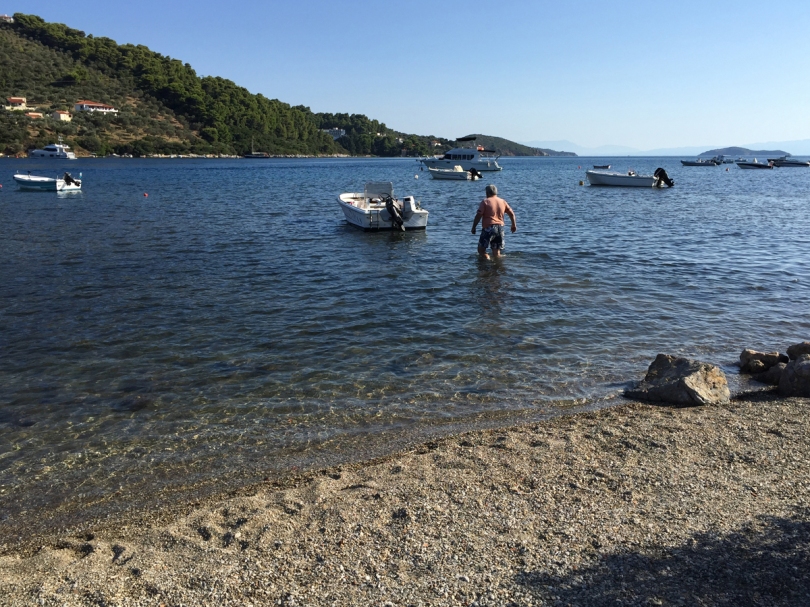 The queue for security wasn’t too long despite them only having one chap in attendance where we were asked to put stuff into trays. Inside departures there was the usual long queue for the women’s toilets, very few spare seats (although we luckily got a pair together) and the usual annoyed faces and grumbles. Thankfully there were no delays which meant we left on time. Here’s a video of our take-off:

We had to stop at Kavala to refuel this time, which feels rather tedious at times.

The crossword puzzle book is still trying our vocabularies and patience to the limit – we’ve done 11 out of the 61 puzzles and not managed to avoid having to flick to the back pages to see at least one word. However it did serve to pass the time while we were on the ground at Kavala.