So many cakes, so little time!

Bakewell is only an hour or so up the motorway and along some excellent country roads from where I live in the UK. Buxton and Matlock Bath are nearby and there’s a bunch of Derbyshire Dales and the River Wye to gaze at through the English rain – careful not to get a sun tan.

Bakewell is the home of the notorious Bakewell Pudding and the more pleasant tasting tart. The pudding, the more traditional of the two is a fatty, sugary, spongy, vanilla flavoured stodgy ‘sponge’ in a pastry casing. Served cold, the fat coagulates on the underside of the pasty casing and makes you feel like you’re snacking on sugary lard (which you may as well be). Served hot, the pudding is rather more pleasant but then greasy as a steam train’s buffer. Said pudding is not in the featured image on this blog post as they are kept behind the counter in a barbed wire container lest they sprout legs and try to savage vegetarian walkers; of which I am sure there are many on the pleasant countryside trails that surround the town.

The Bakewell tart is a rather more digestible comestible covered as it is by a thin layer of damp icing with a cherry on top. The sponge is more consumer friendly and there’s a layer of jam sandwiched under the sponge and the light pastry casing. The fat is secreted inside the structure of the tart and doesn’t leak of globulate around the pastry. It is a delight. Mr Kipling made a fortune out of them. They’re also available without the icing and just a light dusting of sugar on top, but then you don’t get a cherry, and the cheery cherry seems important especially when it’s pissing with rain. Which it was when we visited by invitation to the the Rutland Arms Hotel for a evening wedding party.

There’s a very conveniently placed church up the hill behind the hotel, which helps when you want to get married in the traditional way. The church has an impressive vantage spot with views across the town, an old graveyard full of crooked but surprisingly unweathered stones and a bunch of gargoyles around the base of the impressive spire. There’s bell-ringing on a Sunday, but the less said about that the better. 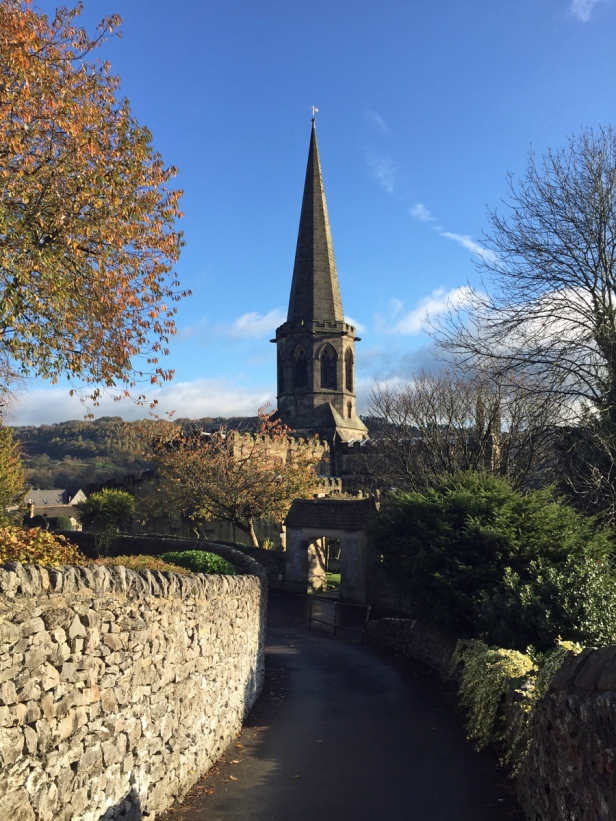 The day after the ‘do’ we walked off our hangovers and strolled around the backstreets, but before I ramble on let me go back to cake. The cake I actually enjoyed the most was the almond tarts – similar to Bakewell tarts but cut into rectangular slices and adorned with sliced almonds and having a stickier consistency to the sponge. Yum! Again Mr Kipling does a passable version, but you can’t beat a fresh bakery product when it comes to cake. Because of the tourist trade the shops in Bakewell are charging quite ridiculous prices for their produce, but you can’t go there and not try the cakes can you? 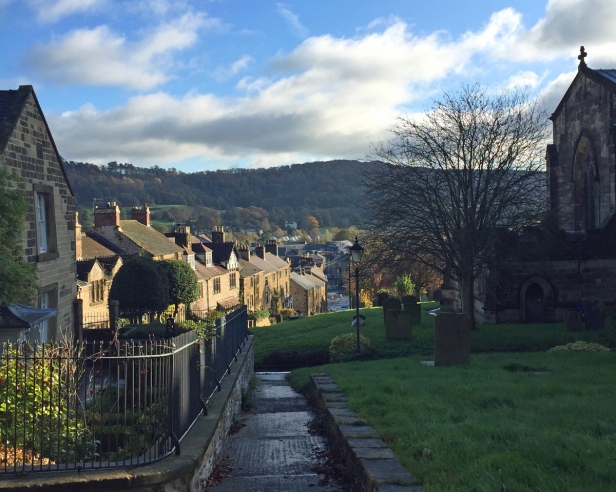 The morning was cold and damp, but thankfully it wasn’t raining anymore. The hotel was old-fashioned but the staff excellent. I can’t comment about the rooms in the main building as we were housed in an annex across the road. The breakfast, served in a nice room in the main hotel, was excellent but if you like your bacon crispy, you best specify that when ordering. More amazing insights about the hotel are available on TripAdvisor – look for ‘couchmagpie’ – trust this bird’s word.

By the river there’s a bridge that people have used to express their love (of locks?) and display there disposable income by adorning it with padlocks like the Pont des Arts in Paris (and countless others no doubt). Some say it’s an EBITA-warming conspiracy started by Yale and Chubb. However, see this news article form a couple of years ago. Pah! Go and boil your bottoms, you sons of a silly person!

There’s a more traditional road bridge too and a host of old buildings which are often pubs when they’re not cake shops. In fact I’ve not seen so many pubs in such a small area for a long time. We enjoyed a preliminary pint or two before the wedding-do at the small olde-worlde Red Lion (full of crusty locals and damp rucksacked ramblers) and refurbished and more Wetherspoon-like The Wheatsheaf (full of well-to-do Range Rover couples and their gregarious children and fostered tots).

The Castle and the Peacock also looked quite inviting, but we had to pace ourselves, settling for a pack of Nobby’s chilli nuts to counter all the sugar and retired to our pokey room to get smartened up for the night of talking to strangers and trying to remember how to dance. There should be a guide on how to best deal with these situations, especially when the only other couple we knew unfortunately cancelled at the last minute. Siggy knew only the bride but everyone was quite friendly and the groom made an effort to talk to us. Lovely couple I must say.

While we were wandering around the next day we came across a manmade bit of waterway which I assume fed the nearby mill back in the day. Now it is mostly silted up, only a foot or so deep and full of thick reeds and other marine plant life. The ducks and the moorhens clucking love it.

The drive back could easily have included a cheeky stop off at Matlock Bath for some fish and chips, a go in the arcades and a nose at the bikers’ various machines which park up at the weekend when they’re not crashing through the dry stone walls. However, duty called and we had other things to do. Not least on my agenda was packing for another work trip to Norway, but more on that in a later post.

With a fair wind and no rain Bakewell would make a lovely destination for a cheeky weekend away in the countryside, especially if you are a walker who likes cakes and small pubs.

4 thoughts on “One night in Bakewell”