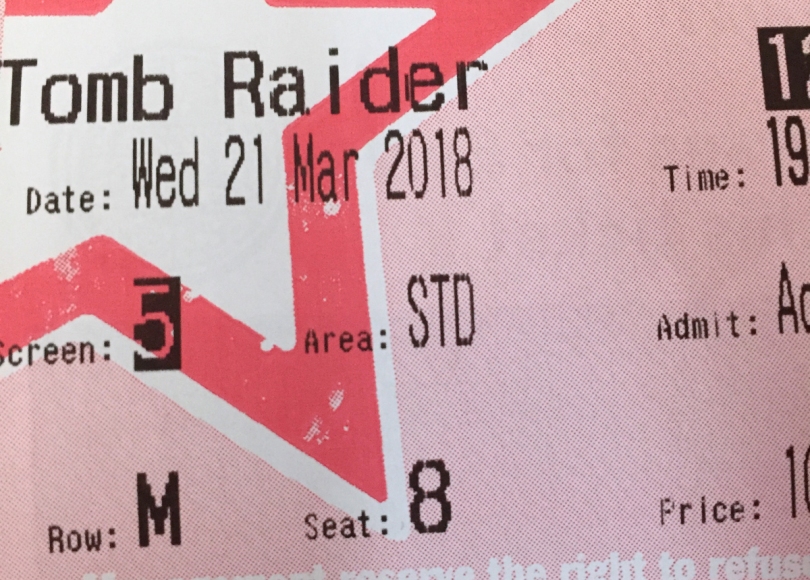 I read a rather scathing review of the new Tomb Raider film on BBC News a few days ago and at the time I thought the reviewer was being rather unkind, but after seeing the film I now find myself agreeing with pretty much all his points. I went into the cinema, my stomach full of evil Mexican (see this post for too much information), with an expectation that I would see a lacklustre, badly-paced origin story.

One thing to say from the off is that Alicia Vikander (Ex Maxchina) who plays the young Lara Croft is great. Her performance casts a rather unflattering light on the other actors. She’s also let down by a cringeworthy script and a screenplay that is crying out to be honed down into a pacey action thriller. Instead we get a lumbering thing which every now and again provides us with ‘action pieces’ that don’t hang together very well but looked good on the trailer. I caught myself thinking fondly about the previous films and I know for a fact that my memory deceives me – they weren’t that good, but I bet they had a bit more zip to them. I remember far more explosions, swimming and tension.

Part of the problem with the new film is that Lara doesn’t get particularly kick-ass until the last thirty minutes or so of the film. The closest comparison I can make, and it’s obvious actually, is Katniss Everdeen’s development in The Hunger Games films. Scared girl who knows how to shoot a bow and arrow turns into a bad-ass and saves the day, never seems to run out of arrows, and kisses two of her fingers before saluting with them. I expected to hear the mockingjay theme kick in at one point but all I could hear were the stifled Scottish yawns of the bored viewers.

Like Katniss in The Hunger Games, Lara learnt a lot from her adventurous father and the difference in Tomb Raider is that he’s not dead – surprise surprise – and she finds him. He’s not overly happy about this because he thinks he’s the only one who can open the doorway to the Indiana Jones zone of this particular mystery island – think Skull Island without Kong or anything indigenously interesting beyond a crashed WWII bomber – and he’s hiding from the bad guys.

But Lara has also figured out how to unlock the tomb on the boat over from Hong Kong (or some other generic asian port, it hardly matters). Once inside they replay lots of bits and bobs collected together from the Indy films and original The Mummy films (the funny ones not the Tom Cruise turkey) all of which are better than this film – even dare I say The Crystal Skull.

The whole film felt like a drawn-out tutorial mission for one of Square Enix’s brilliant Tomb Raider games rather than an action movie. The balance of action versus light-heartedness versus family drama versus international corporate maleficence was all skew-whiff. Even a comedy turn by British comedy actor Nick Frost as a dodgy London pawn broker fell flat like an over-beaten Bake Off cake.

All that said, If they can find a better writer, if they can think of something original to write about and if they can bring in a cast to support Vikander then there might be some hope of a good sequel. The fact that she only gets her two distinctive pistols in the closing moments of the film and ends by saying ‘jobs to do’ is a fair indicator that they expect to be doing a sequel. However, these days if the first film doesn’t bring in a certain amount of cheddar then the risk averse Hollywood studios will just can the whole idea.