Siggy and I, get to London on a fast train stopping only at Leicester to let off some poor sods who had to work there that day – it’s like adding insult to injury. First stop once we’d ditched our bags in Excess Luggage at London St Pancras Station (not to be confused with the organ that secretes enzymes into the small intestine to help break down food and produces insulin to regulates the body’s glucose or sugar level). We do this because we aren’t intending to check into our hotel until later in the day and frankly who wants to lug round travel bags hither and thither? Not us squire that’s fo sho.

We walk the short distance away from the hubbub of King’s Cross (not to be confused with the American hip hop duo formed in the early 1990s that consisted of Chris ‘Mac Daddy’ Kelly and Chris ‘Daddy Mac’ Smith whose debut single ‘Jump’ topped the Billboard Hot 100 for eight weeks and went double-platinum) and St. Pancras’s taxi ranks to visit the converted gas holders and new retail area known as Coal Drops Yard. It’s great to see how they’ve redeveloped the pretty much derelict area and thoughtfully built inside the iconic gas holders which have always been a signal to me that I’m almost in that London.

We then follow the canal as far as we can – hoping to arrive naturally at Camden Docks – but being thwarted by barriers and no go areas. Instead we follow the road into Camden Town and then have a wander around Camden Market. We spend a little time in the cyberpunk day-glo Cyber Dog populated by robot statues and home to a worrying adults only section.

The statue of Amy Winehouse is a huge disappointment but the area itself with its various coffee shops, outdoor food stalls and shops selling all sorts of clobber – both expensive and cheap tat is a great place to visit. After cake and coffee in one coffee shop we nipped into the local Wetherspoons – The Ice Wharf – for beer and to take advantage of their toilets.

Then Google Maps comes to our assistance in walking through the more salubrious Primrose Hill area and to the hill itself. We’ve never been to either Camden or Primrose Hill (although we came close with a visit to nearby London Zoo a few years ago) and it is great to tick a few more things off the list. The weather is cold and windy, but the views of that London from the top of the hill are well worth the exertion.

Then it’s time for lunch. In a ‘fuck it’ moment we step into Michael Nadra Primrose Hill martini bar and restaurant for an indulgent lunch. Nice fresh bread, steak, chips and prosecco for two is the order of the day. We would have had some cocktails but the pricing rather puts us off. The ‘fuck it’ mentality still has it limits it seems. The service is excellent and so too is the wine and the food, and to be fair for London it doesn’t seem overly expensive. Obviously getting a wrap or some cheesy chips from Camden market would be more economical, but it’s not every day we get the opportunity to eat out posh and have bubbles for lunch.

Then it’s back to St Pancras to get our bags and take the Thameslink over to Blackfriars which is ten minutes or so walk from our hotel. It’s not a fancy place. Utilitarian. Somewhere I’ve used for work five minutes from the Tate Modern (where I stayed when I visited the Picasso exhibition). We got some drinks vouchers from the friendly chap at reception (my reputation precedes me) and then we go and unpack.

Then to the aforementioned Tate Modern for the fabulous Dorothea Tanning exhibition. Tanning (1910 – 2012!) was an American painter, printmaker, sculptor, writer, and poet. Tanning’s early work was influenced by Surrealism and I had not heard of her until I very recently read China Mieville’s novella The Last Days of New Paris and subsequently read further into her work. To say I was taken by the range of amazing art on show in the exhibition spanning her seventy-year career is a massive understatement. Blown away. 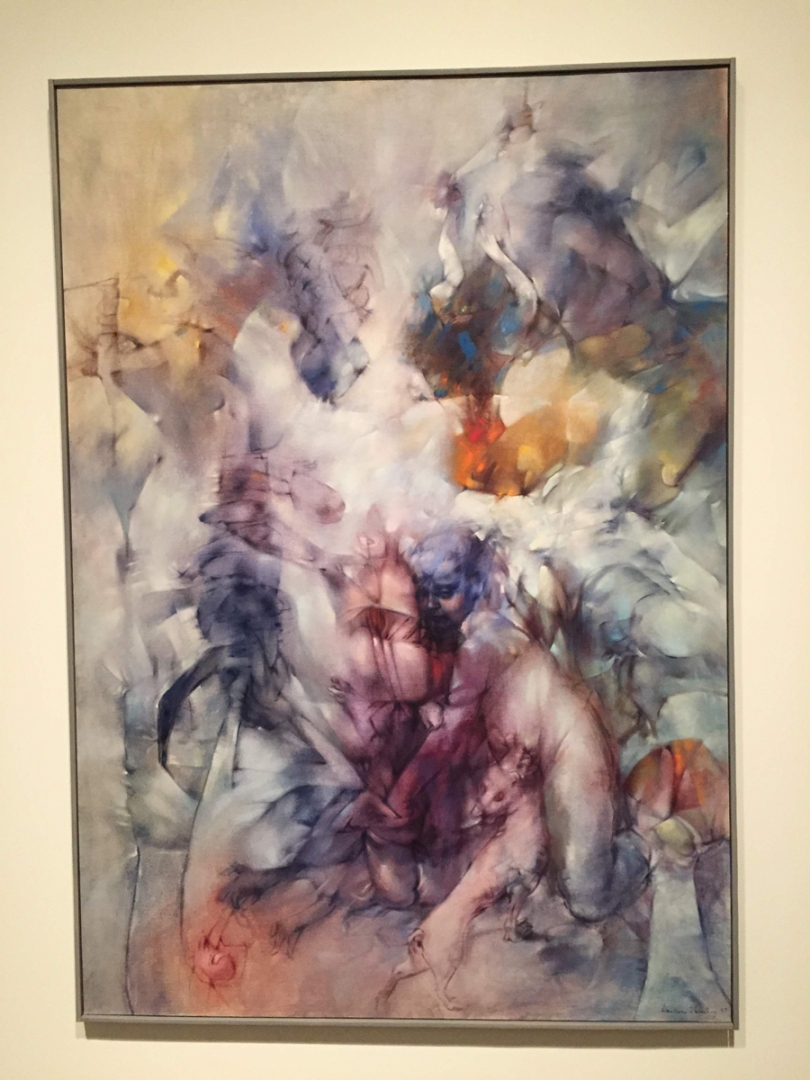 The shift from the Surrealism of the iconic Eine Kleine Nachtmusik(1943), which is a brilliantly thought-provoking piece (as are pretty much all her works) but comparable to her peers, toward such paintings as Insomnias (1957) – shown above – and A Mi-Voix (1958) seems like such an impressive jump and indeed Tanning is quoted as saying that –

“In the first years, I was painting on our side of the mirror – the mirror for me is a door – but I think I have gone over, to a place where one no longer faces identities at all.”

Reading this in room six of the eight room exhibition really makes me think I’ve discovered a new favourite and sparks my imagination – especially considering the science-fiction elements of my book Bad Blood.  If that wasn’t enough Tanning then put down her paintbrushes and moved onto fabric-based sculpture – taking some of the amorphous body-part imagery from her earlier work and rendering it in three dimensions. The next room is dedicated to her early 1970s installation Hotel Du Pavot, Chambre 202 which wouldn’t be out of place in a Stephen King film – misshapen body parts break through the walls of a dingy hotel room.

After the Tate Modern we take a break at the hotel, get ready, have our free drinks and some Nobby’s Nuts at the hotel bar and then wander along to the nearby Thai Silk Restaurant. I think I’ve reviewed it on TripAdvisor so I won’t bother here. It’s okay. Sort of a middling Thai Restaurant and to put it into perspective it turns out to cost less than lunch in Primrose Hill. 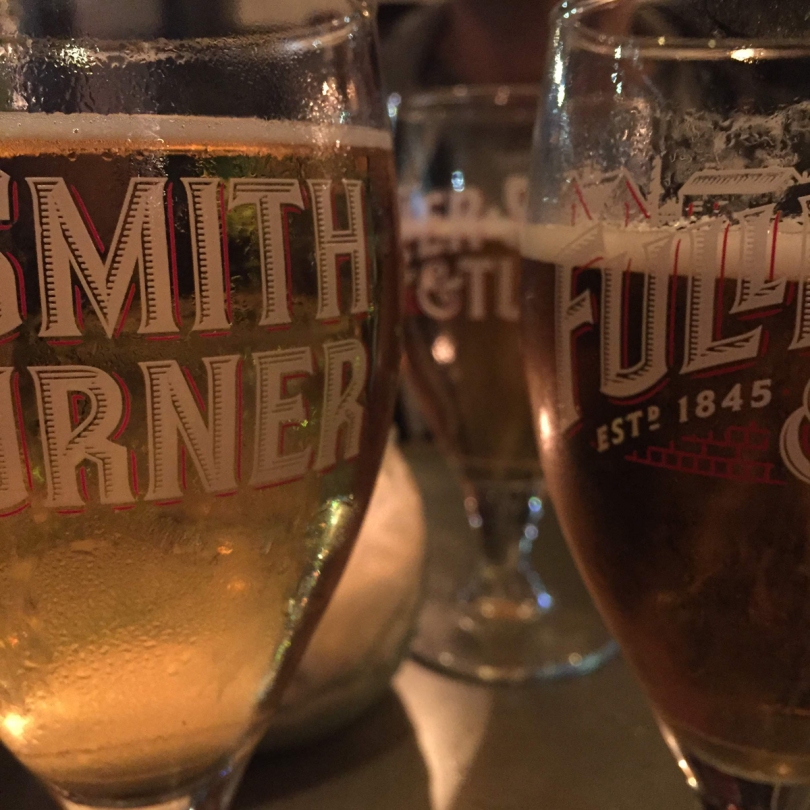 We then walk through the greasy streets of London looking for a suitable watering hole in which to spend the rest of a damp evening. Our wanderings take us to the Waterloo area and The Hercules on Hercules Rd which feels like some kind of busy yet relaxing amber-lit refuge from the elements for an hour or so. We drink various lagers and compare the dampness of our jean ends, admire the wide selection of beers and some of the tasty-looking food that is brought out to other punters’ tables until, Google Maps assisted, we find our way back to the hotel.

You miss out seeing so much if you take the tube everywhere you want to go and our feet hum in painful agreement. We’ve clocked about 24,000 steps today and we’re ready for bed, and then whatever day two of our little trip holds for us. Read the next post to find out more…