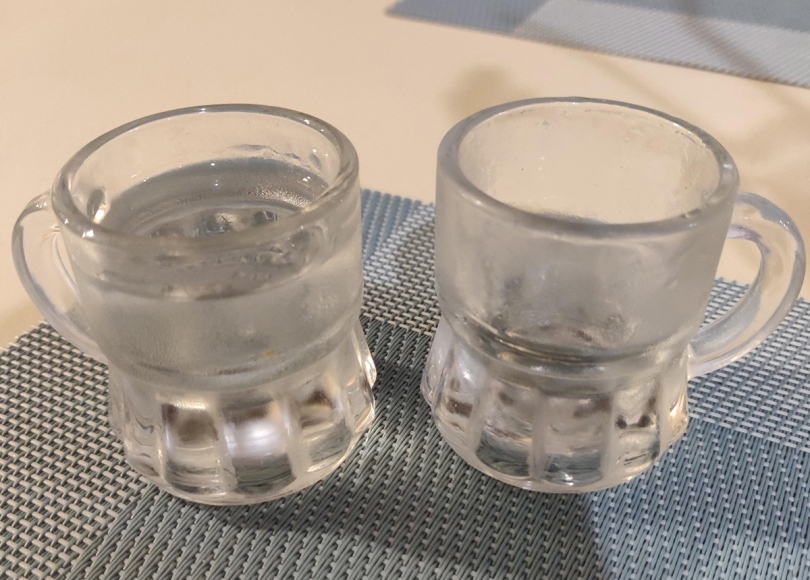 In the morning I realised that I had failed to pack a bar of soap. The local supermarket didn’t have my usual brand so I bought a bar of Dettol soap for 1 Euro instead. Hashtag first world problems. And if you’re still with me after that stunning insight then read on…

Like a lot of tavernas and hotels on the coast road, our hotel had its own sun beds and umbrellas, and a beach food and drink service. Also they give you beach towels (with 10 Euro deposit that you get back on your last day) and let you swap them three times a week so they don’t get too cruddy.

We spent a little while on the beach and wondering if the breeze would get any stiffer over the course of the week. It was cooling for sure but it was a bit of a worry that the sea might get rougher and the sand might start getting kicked up like some of the rough days we had in Kos.

We went to a nearby taverna on the beach road called La Mare for lunch – I had an omelette and a few very nice chips. Siggy had a cheese and ham crepe that was more of a sweet than savoury pancake. We didn’t know it at the time, but hiding inside the menu were the best tasting and best priced milkshakes in our vicinity. But that came later…

Later in the day we walked to the old town – about half an hour westwards along the main road from our hotel. There’s far more shops, bars and tavernas there but also loads more skanky hotels (becoming taller and taller as we got closer to the port) and lots of plebs. If I sound snooty then it’s because we’re in a five star hotel and have been taking lessons on how to look down your nose at people from some of the other guests. I think they might be German.

There were plenty of souvenir shops selling fridge magnets, tea towels, fake and genuine brands, bottles of raki and soap on a rope willies as well as the usual wooden bottle opener willies. It reminded me of a joke about two nuns in a bath.

The old town is supposed to be one of the best-preserved towns of the Renaissance, combining Turkish with Venetian architecture. After the conquest of Crete in 1204, the original craftsmen were Venetians, but these later were replaced by local murari, Venetian-trained master builders.

A lot of buildings with gothic features were lost in the destruction of the town by Ulu Ali in 1571, and Rethymnon was almost entirely rebuilt. Some Turkish architecture is preserved scattered around the narrow streets including a mosque.

There’s a lot of churches and old Venetian-looking balconied houses lining the narrow streets. There’s also a whole lot of angry looking graffiti. Some you’d call ‘street art’ if you were being charitable, but it’s mostly quotes in Greek or English (when they want the tourists to understand e.g. ‘immigrants welcome, tourists fuck off!’). 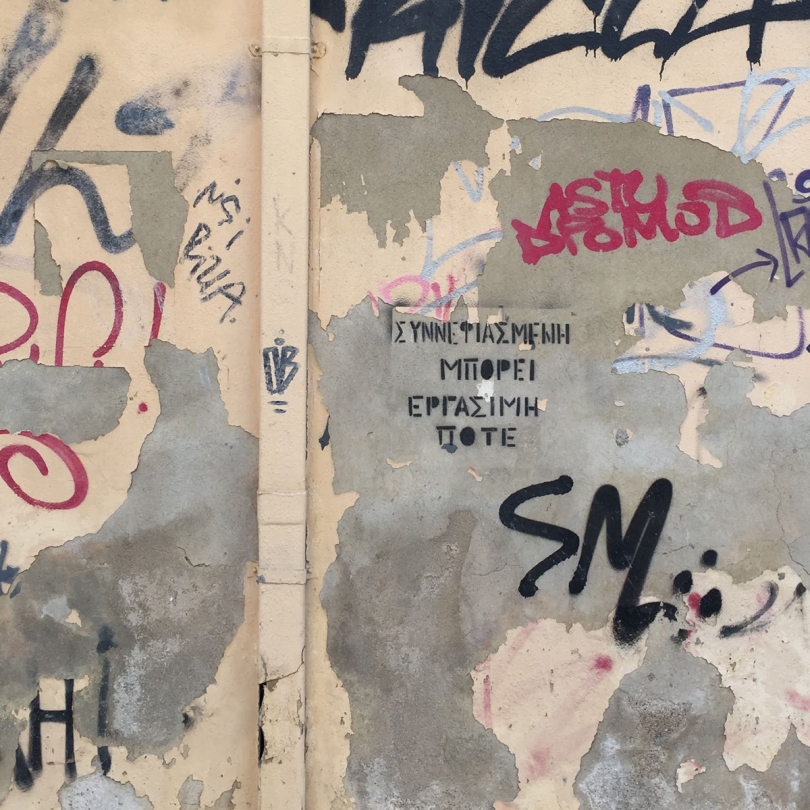 I’ll put some more photos of the old town in later posts.

We got a taxi back to the hotel for 5 euro. The fancy plug in the sink didn’t actually hold the water in for very long so we bought a bowl for washing my sweaty shorts for 2.50 Euro from a supermarket.

To escape the wind, we went to Crete Taverna on a road off the main road for our evening meal. I had chicken souvlaki and Siggy had moussaka with not too many chips or rice etc. The kebab was made with big lumps of chicken and was served with a very nice tabbouleh. With the bill, we were treated to complimentary orange cake and raki.

We walked back around to the main road and saw that there was no room in Bora Bora for cocktails apart from sitting on stupid high stools, so we tried Alberto’s taverna for drinks instead. Despite primarily being a taverna they have a cocktail list of 38 cocktails priced at around 7.50 euros. We had a Hot Kiss and a Grasshopper with free nuts and complimentary raki in little old skool pint glasses.

Then we stopped in at Kai. My first impression was that this was a trendy bar restaurant with stupid lampshades for pretentious twats who didn’t quite make it to Santorini. They had what seemed to me at the time ridiculously priced cocktails on a square transparent perspective menu (9 Euros). We made a stand and ordered a Purple Haze and a Yoko – alcohol free cocktails.

A tall bottle of water arrived free with the drinks. There were still a lot of people smoking inside despite the EU ban that came into force years ago. There were five staff on duty but it still felt like it took ages to get served, or maybe we just weren’t on Greek time yet. Free crisps arrived and suddenly all is forgiven – they were thin crinkle cut with a light paprika flavour and a perfect accompaniment to the cocktails. The drinks were very nice and nothing a bit of gin or vodka couldn’t sort out, but we weren’t going to help pay for their stupid lampshades. 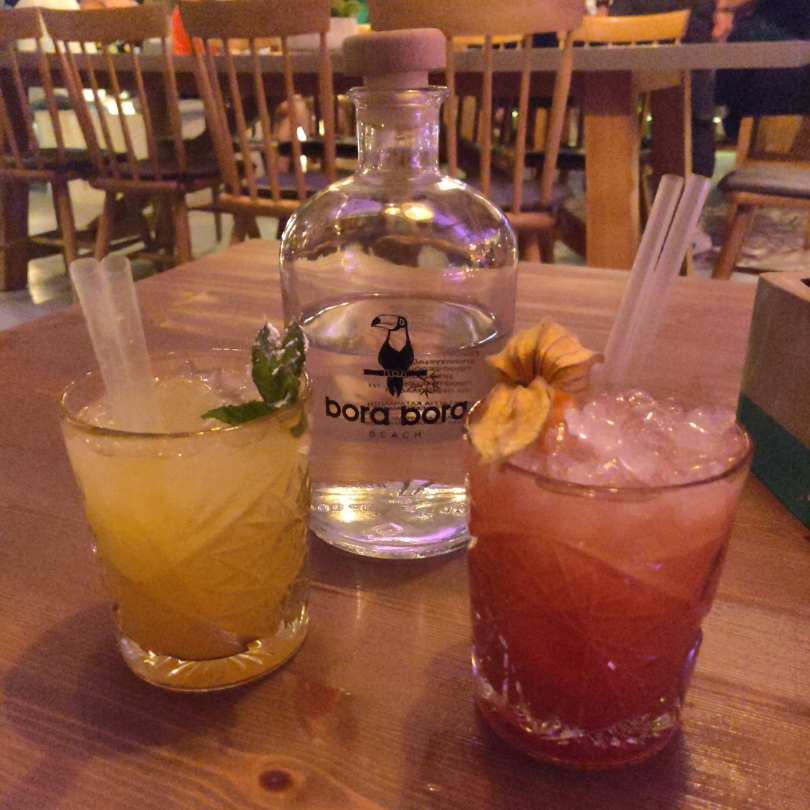 Then went back to Bora Bora which looked more fun and cheaper. The cocktails were 8 Euros and we had something called an Exotico and a Bora Bora. Both were very strong, perhaps to take your mind of the rubbish dance-pop being played and the general noise. A little platter of fresh fruit slices arrived along with more free water.

We actually never went back to Bora Bora and grew to like Kai. ‘Five star baby!’ became our mantra in the end.

(Please note that, for a change, all the photos included on this series of posts about Crete are my originals and if you do want to rip them off I’d appreciate if you let me know or at least gave me credit (c) 2019 Matthew Haynes.)