We were picked up by a double-decker air-conditioned coach with a guide on board at 9:30am. We had booked the trip with our hotel rep for 15 Euros each. We expected to be back by about 17:00. The journey involved a couple more pickups and took about an hour to get to Chania. It’s pronounced ‘hania’ the ‘c’ is silent. 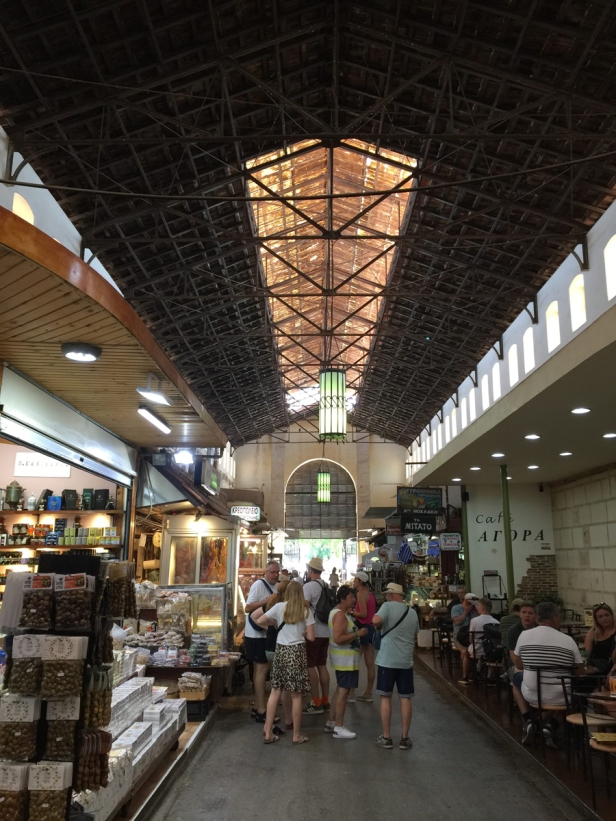 We were dropped off outside the market place which our guide told us was modelled after a building in Marseille. We entered through the front, ate a vanilla slice, looked at some tourist tat, went out of the back and down leather street – Skridlof – not to be confused with Skid Row. It was already clear that there is a strong Venetian influence in Chania’s narrow streets and tall balconied buildings with a slice of clear blue sky above.

Leather Street stank of, yes you guessed, leather goods – anything you can think of including leather baseball caps. Then we took a right down Halidon Street and found St Mary’s Cathedral on the right. Again, the Italian influence is clear – it’s not the usual cross shaped building with a dome. There were some flamboyant decorations and murals inside. 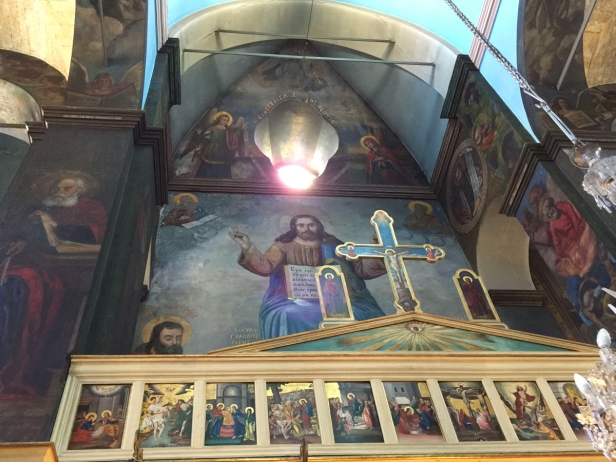 Then we went into the nearby archaeological museum to see what a Greek urns, coins, statues, Hercules’ willy, necklaces and Minoan bulls. A lot was off-limits photographically and so I got a cheeky shot off at the door while making it obvious that’s what I intended. No one told me off and believe me they were enforcing it for specific exhibits like the bulls. You can see them in my photo and if I had a telephoto lens then that would’ve tricked them.

There was another church buried away on the same side as the museum which was nice and cool with Phantom of the Opera style music playing. Then we walked down into what one of the many pieces of graffiti announced was Touristland. There’s a bloody Starbucks for Christ’s sake! It made the Port area of Rethymno look like a historical preservation area.

It’s a shame because there is so much history to see in the Venetian harbour behind all the chairs, tables and awnings. We took a walk around and along the sea wall to the lighthouse. Then along some of the narrow streets toward the fortress where Chania Rock Festival was scheduled. 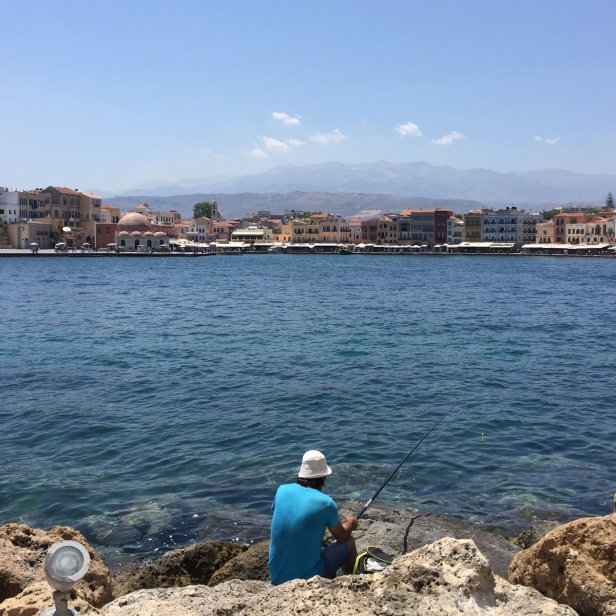 For lunch we stopped at Mikro Sarai a corner cafe bar just back from harbour front. The sound of drums was coming from the fortress and we realised they were doing sound checks for the rock festival which featured bands such as Rotting Christ, Holocaust and Carthagods. We saw a few fans wandering around sweating their arses off in obligatory black tee-shirts.

I had Dakos for lunch – a salad of tomatoes and feta on top of crusty Cretan bread. Siggy had a ham and cheese croissant sandwich. Milkshakes were on the menu for 4 Euro and we had low expectations as a result, but they turned out to be excellent ice-cream based, thick and tasty.

Then we walked around the fortress walls and around the bastions where we could see some of the damage caused by the severe weather they had experienced – a section of the ancient wall had fallen down and also knocked down another wall alongside the road. Piles of ancient stone and earth. It was a shame to see something that has been standing for centuries reduced to rubble.

Then we just had a good wander around coming across a minaret left over from the Turkish occupation of the island. We had some ice creams from one of the many little ice-cream cafes and later had a couple of cappuccinos next to St Mary’s at Vilelmine. An electronic sign outside a pharmacy said the temperature was 32C.

The pickup was precise and the trip back uneventful. Just before the pickup I panicked and rushed into a corner cafe to use their toilet. I was told that it was just for customers, so I bunged the waiter 2 Euro to use his facilities. Not one of my proudest moments, but I needed a slash.

Back in Rethymno, we dropped in at Ikonez Seafront Luxury Suites Lobby Bar for more milkshakes. Like the White Russians we’re searching for good milkshakes in our locality. We didn’t find them at Ikonez.

If memory serves me correctly I think we dropped down to the beach for a while to chill out before going back to the hotel to get cleaned up to go out for dinner.

Argonautis Taverna warned me that their octopus would not be boiled before grilled so could be a little tough, so to avoid disappointment I chose Dorado instead and Siggy kept it simple with a Greek salad. It was great food but it took fucking ages to get the bill even by Greek standards – we had to ask for it twice and they weren’t overly busy. Bill-freeby was orange cake.

We tried the Sports Bar next to Manolis Place for cocktails – Cuba Libra and White Russian – and then Irini for beer and nuts, sitting on a table looking out at the promenade. Two motorcyclists thought it was hilarious to rev their bikes outside the taverna and pull wheelies at high speed. I wished them Godspeed. To the hospital… 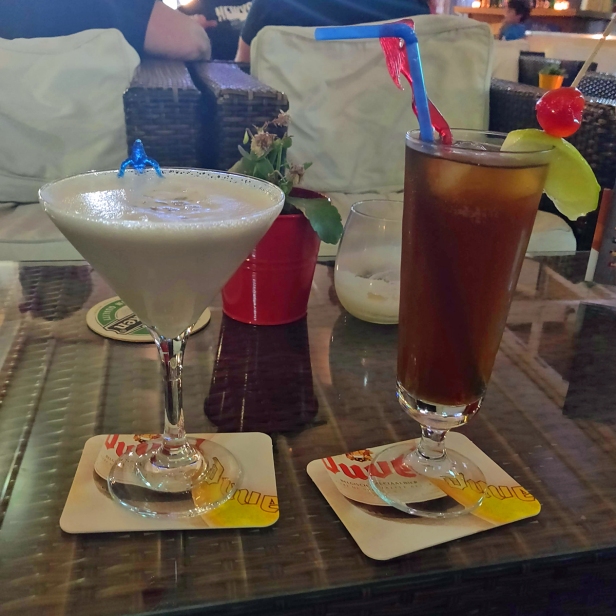 (PLEASE NOTE THAT, FOR A CHANGE, ALL THE PHOTOS INCLUDED ON THIS SERIES OF POSTS ABOUT CRETE ARE MY ORIGINALS AND IF YOU DO WANT TO RIP THEM OFF I’D APPRECIATE IF YOU LET ME KNOW OR AT LEAST GAVE ME CREDIT (C) 2019 MATTHEW HAYNES.)