Day 14: Stormy Thursday
It was blowy and cloudy today which has been a welcome relief after the heat of the past few days. My breakfast was the unhealthiest I’ve had so far but I felt a bit jaded after all the alcohol last night – I had about four shots of raki at the restaurant plus the beers and cocktails. My breakfast plate was loaded with a pile of little wiener sausages, ‘bacon’ (thin greasy strips of meat with only a passing resemblance to what I recognise as bacon), a chunk of omelette and a croissant, topped off with lashings of orange juice and coffee. I had a big apple to try and take the unhealthy edge off, but it rather stuck in my throat – they may be big over here but they tend not to be particularly juicy.

I had a good sleep on the beach this morning as there weren’t so many people near us today. I feel like it’s Russian accents that I am hearing more than German on our beach. I’m hearing hardly any English, as I’ve already mentioned, which in some ways makes a nice change.

We had lunch at La Mare. I had ate a gyros pitta and Siggy had yet another toastie, accompanied by pistachio milkshakes. We were offered raki or ouzo again (at lunchtime!) but politely declined and were given watermelon chunks instead. I found last night that the shock to your system that the raki gives you induces goosebumps which actually helps you cool down.

The staff at La Mare, and actually all the tavernas near our hotel are very hospitable. Some places in the UK really could learn a thing or two from them. On the whole we’ve been very lucky with the tavernas in the old town too and the bone home is only slightly diminished by the rather more professional and competitive nature of these closely-packed establishments.

After lunch we walked to the big supermarket around the back to buy sweeties for people back home. The reality that it’s our last finally hits home. It’s a sad feeling. Back on the beach I finished reading Heroes by Stephen Fry.

We thought it fitting to go to Vatania for our last meal. We looked out at the choppy sea and the dark clouds and wondered if it was actually going to rain. It was as if the weather was an outward manifestation of my inner mood. We ate garlic bread and special pizza and drank homemade draught Radlers. Bill-freebie was a creme caramel but the gas ran out on the blow torch before the waitress could melt the sugar on top. We scraped it off and carried on regardless.

We went to La Mare for cocktails, having noticed at lunchtime that they had a good selection which were well priced. I had a Hula Hula made with vodka amaretto peach and orange juice (and a sparkler) and Siggy had – yep you guessed! – a White Russian made with vodka Baileys and Malibu which was an odd combo, but both tasted fine and strong. 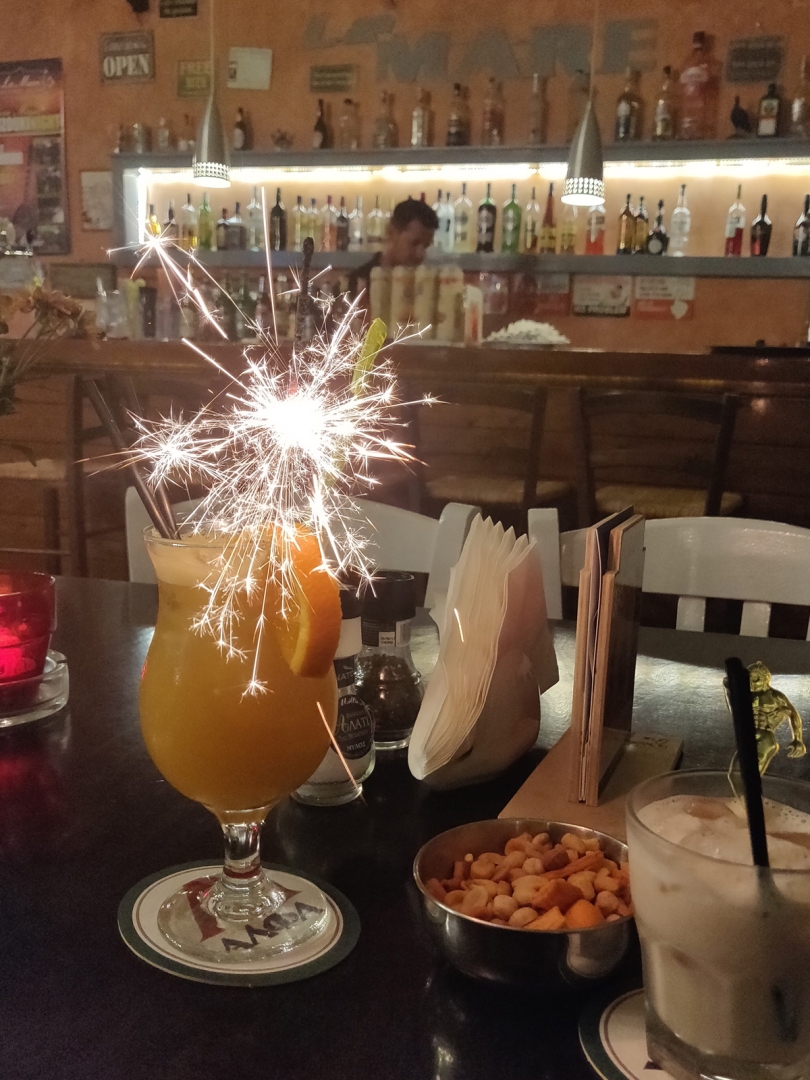 I gathered from some bar banter that some of the people I’ve been loosely identifying as Russian are actually Polish. Not the kind of mistake you want to make to someone’s face given their history. In fact it shows how things have moved on since the 1940s that Poles, Russians, Germans and Brits are able to rub shoulders with one another without coming to blows.

We then visited the Sports Bar next door to Manolis and had Passion and Kiss Me Again cocktails, and Kai for an excellent tall Mojito (me) and something called a Smoky Rainbow (Siggy) the ingredients are on the menu in this post.

Day 15: Friday finale
We packed most of our stuff last night and a bit more in the morning. We’d managed to secure our room free of charge until 2pm which helped immensely given we were getting picked up around 4pm to go to the airport. We sunbathed on the beach until 1pm. Siggy got a huge donut from the jolly donut man who also sells fruit salads from his umbrella laden quad bike that he drives daily along the front of the beach.

I started reading David Jackson A Tapping At My Door. Not a book I brought with me but one of the only English language books available from the hotel’s collection and beggars can’t be choosers. I won’t include it in my Holiday Books 2019 post.

After a quick shower we finished packing then left our luggage in the luggage room. We were given two bottles of complimentary water saying thanks on the label when we checked out which was a nice touch, even though we’d already got a couple of small bottles from the supermarket. It all got drunk before we went through security at the airport.

We stayed in the hotel for lunch. The fantabulously entitled All Day Cafe Bar Restaurant Panorama served us a fruit salad and chicken souvlaki – no prizes for guessing who ate what. Siggy predictability wandered off to take some photos – an excuse to stay out in the sun some more. I ordered a tiramisu but I was not sure if the request fell on deaf ears or not. ‘Time will tell…’ I thought. Some watermelon arrived while I was waiting.

The waitress got her stuff and went home having forgotten to tell her colleague about my order. It eventually arrived once I’ve made it clear I wasn’t moving until I got it. Siggy was somewhere on the island. The tiramisu arrived and I was told it was on the house due to the mix up. Siggy reappeared as I was tucking in, confused as to why I was still in the restaurant area and not waiting for her in reception like we’d agreed. It was a strange tiramisu with half a dry sponge finger balanced on top of its layers held in place by a dry dollop of something. It tasted of coffee and it was free so I can’t complain.

The coach transfer to the airport was long and uneventful. The queue to check-in at the airport was slow-moving but short. Security was okay and the airport one of the better experiences I’ve had of Greek airports.

We got some food and drink from one of the busy kiosks and went through passport control to our gate. People were already queuing to board, so I downed my coke and went for a quick tinkle. Siggy bagged the window seat on the way home and spent most of the time asleep. I dozed as much as I could and the girl next to me wasn’t much of a hassle despite wearing a wide-brimmed hat for the whole of the journey. Although we were about 20 minutes late taking off it was a much more pleasant experience than on the flight out.

Rethymno has been an interesting place to visit and I know that we missed out on visiting some of the museums there and could’ve committed to the travel time involved in some of the trips available to places like Knosos (so laden in myth), but I had a thoroughly good time and would definitely recommend it. Maybe even more so than Santorini because it is simply more welcoming and less pretentious than its neighbour.

(PLEASE NOTE THAT, FOR A CHANGE, ALL THE PHOTOS INCLUDED ON THIS SERIES OF POSTS ABOUT CRETE ARE MY ORIGINALS AND IF YOU WANT TO COPY THEM I’D APPRECIATE IF YOU LET ME KNOW OR AT LEAST GAVE ME CREDIT (C) 2019 MATTHEW HAYNES.)