I woke after a surprisingly peaceful night’s sleep with a pretty bad hangover. It’s a good job I packed plenty of paracetamol. After a shower I ate half a pear filched from a buffet outside a conference room in the hotel yesterday. They had a pile of green apples for guests to eat near reception but if there’s one thing I hate its green apples. How I like them apples? I don’t.

We caught the U2 from U Mendelssohn-Bartholdy-Park to Alexanderplatz, and ate croissants and drank Diet Coke for breakfast among the mini fairground under the Park Inn Hotel. There was some funky german dance music playing and the place had a grubby but fun vibe about it. I imagine with all the bars and restaurants in the area it could be carnage late at night. There was a stall selling traditional potato pancakes nearby but we’d already bought the pastries by the time I noticed it.

We walked up the road and went to look at the iconic super tall Television Tower but the thirty minute queue time put us off going inside and up to see the views (the paracetamol had yet to kick in properly). Instead we walked along to the nearby St Marien Kirche and the Neptune fountain.

We also popped in to see the huge fish tank in the foyer of the nearby Radisson Blue hotel just across the road near Berliner Dom – the cathedral. According to my very useful Berlitz Berlin Pocket Guide the cylindrical fish tank is the largest of its type in the world and holds 2,500 tropical fish. 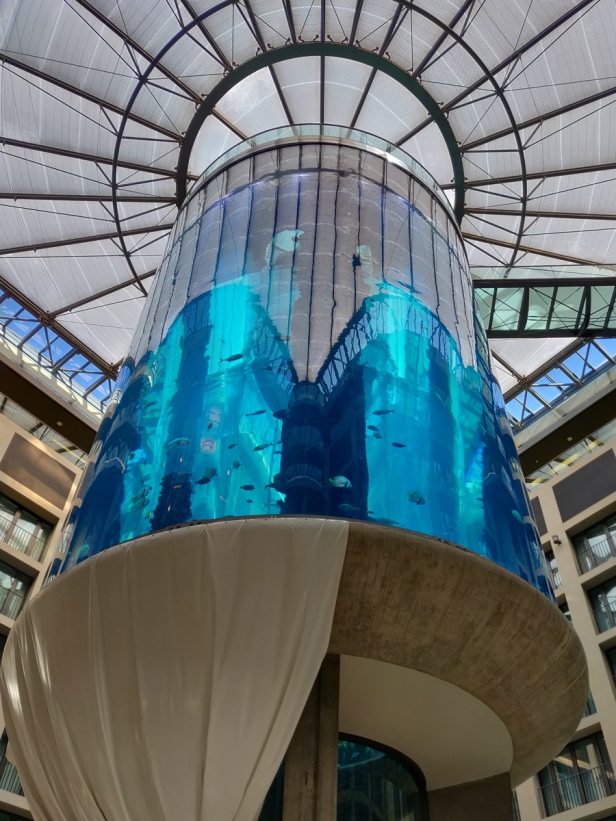 Then we had a look around the DDR Museum opposite Berliner Dom by the spree. The museum gives an interesting interactive account of life in East Germany before the wall came down. There was almost too much for our hungover brains to take in.

After that we wandered back across the road and through a bit of park toward the Red Rathaus (Town Hall) looking for a cafe or vendor for lunch.

Along the way we saw a statue of Marx and Engels (I think) where Japanese looking tourists were posing for photos with one fist in the air. Up the workers? Later we found ourselves having baguettes outside a small cafe opposite what I think is the oldest church in the city Nikolaikirche with its typically German twin towers. 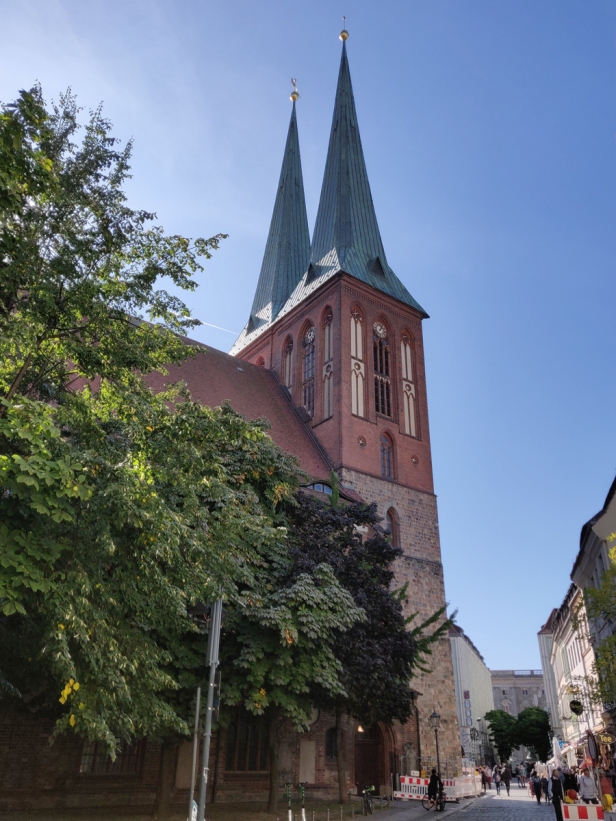 Then we took a rather convoluted route to Gendemanmarkt with its two churches and concert hall. It was a bit of a tourist trap so we didn’t hang about despite the lovely blue skies. 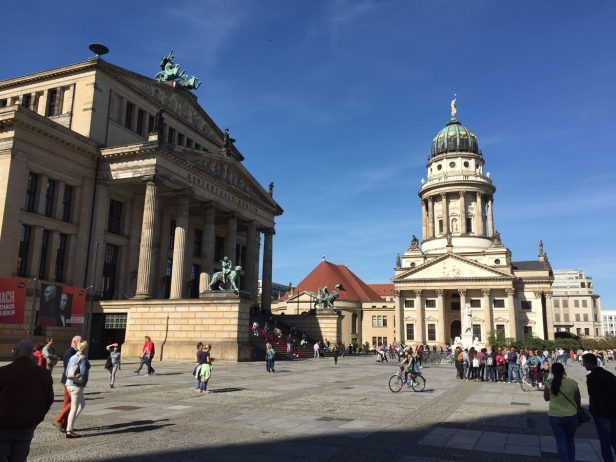 In a large cafe on Unter den Linden, I had a huge but disappointing pretzel and a latte. The pretzel was, as anyone other than me might have expected, dry and salty – probably okay with beer but pretty dreadful with coffee. Also it cost 50 Cents to use the toilets which I found a little preposterous given the prices the place was charging for its food and drink. Siggy had an American cheesecake which tasted a whole lot better than the pretzel. 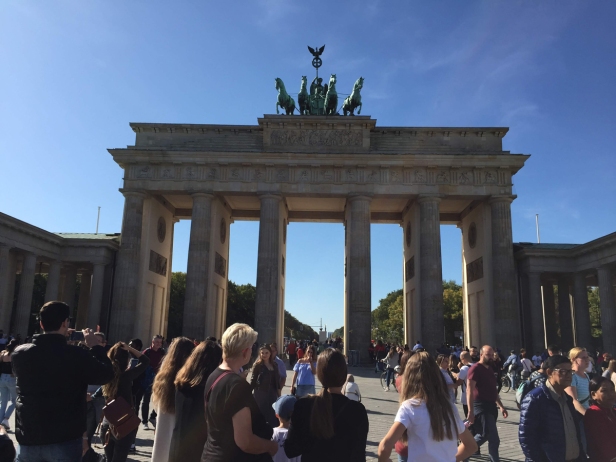 Then we walked up to Brandenburg Gate which was free of environmentalists. It was busy yesterday that I didn’t even realise that there is a train station entrance nearby and part of the area in front of the gate is pedestrianised. After a good neb and some photos, we walked along to Potsdamer Platz to check out the Sony Centre. As you’d expect it was all shops, coffee and fast food, and while the architecture was nice to look at, we had bigger fish to fry so we moved on. 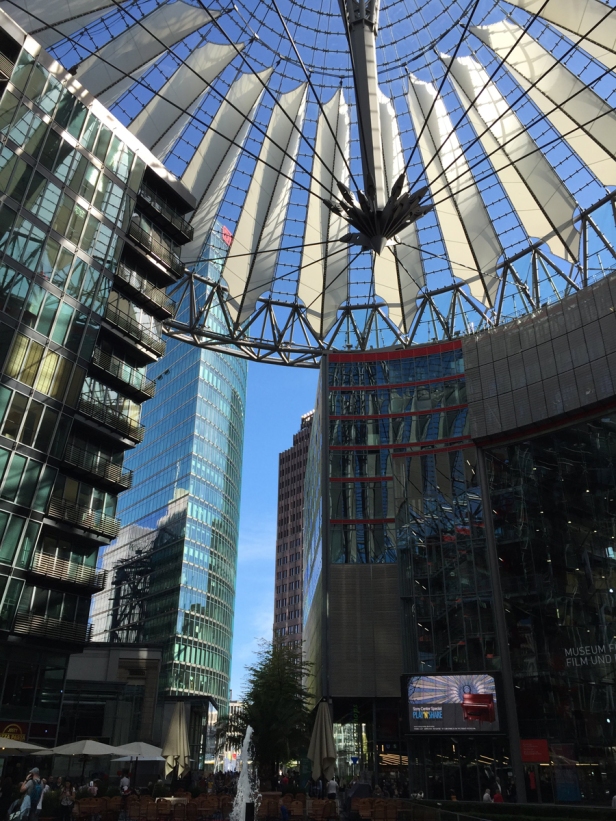 We took the U2 to Sophie Charlottenburg and ambled down a rather posh looking avenue with a tree-lined walk up to the front gates of Schloss Charlottenburg. Keeping with the schedule we didn’t pay to go inside and just ambled around the gardens to the rear of the magnificent pile enjoying the great weather. There appeared to be a number of wedding receptions taking place there and again it was 50 Cents to use the loos. 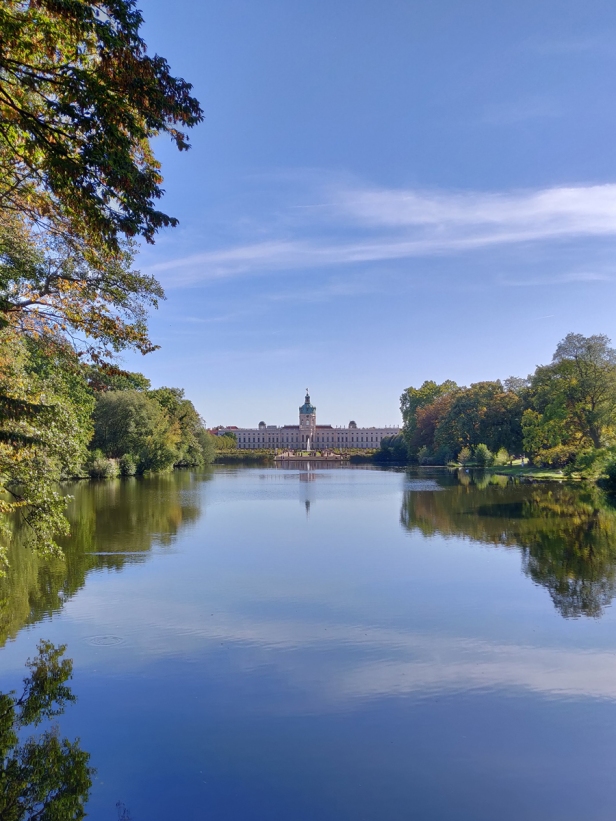 Then we got the train back to U Glasdreiceck and walked back toward the area we knew from last night passing the GLOW beauty convention that was still in full swing and the side of the Technik Museum (again) with the DC3 aeroplane up on its roof. 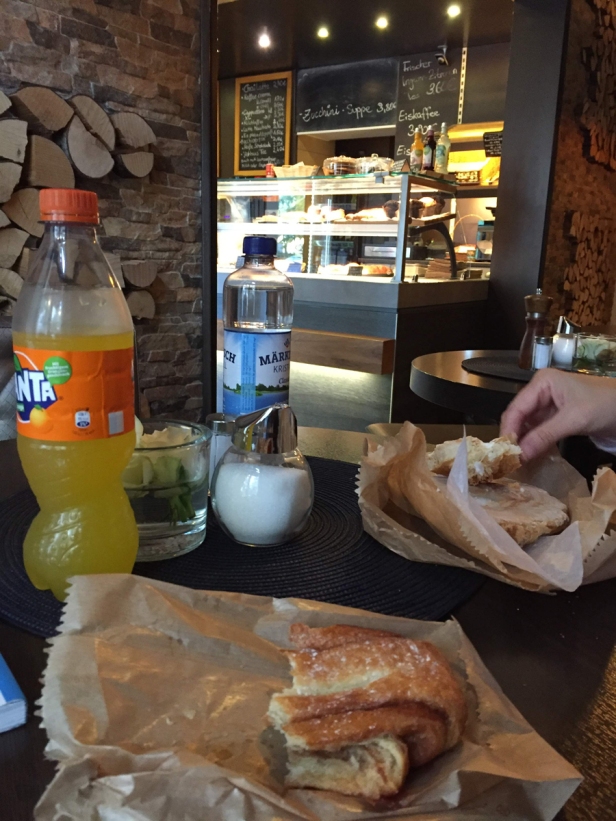 We had pop and pastries in cafe next door to Taverna Athene. I checked my phone and saw that we walked over 25,000 steps today even though we used trains more. In hindsight we should’ve bought a day ticket as our total ticket purchases amounted to around 60 Cents more than the more expensive single shot ticket, and lord knows we needed the cash for the toilets!

In the evening we went to the very small Mabuhay Indonesian restaurant very close to our hotel for dinner. I had an excellent beef rendang curry and Siggy enjoyed crispy duck in peanut sauce. I tried a few of the local beers with the food. The men’s toilets doubled as a store room with two sets of step ladders and about five propane tanks inside, but don’t let the danger put you off – it’s a great place to eat if you can manage to get a table. 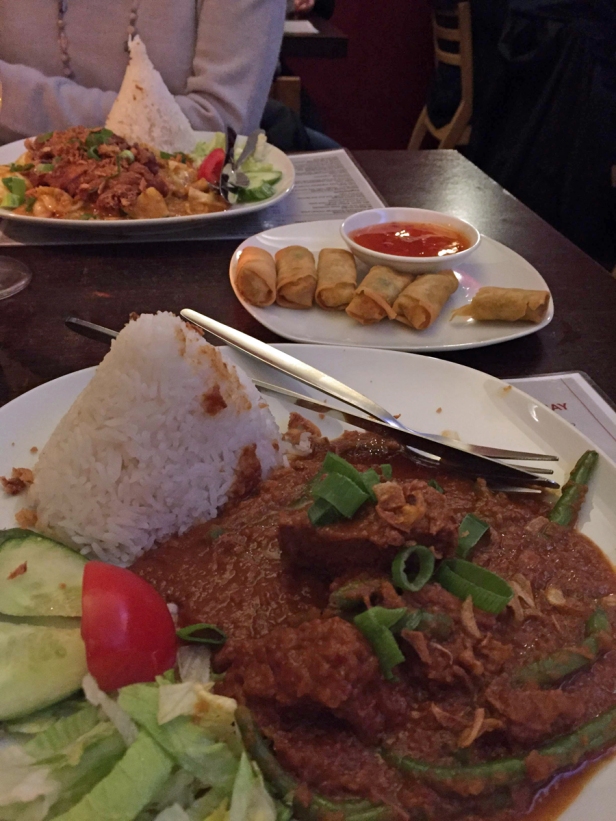 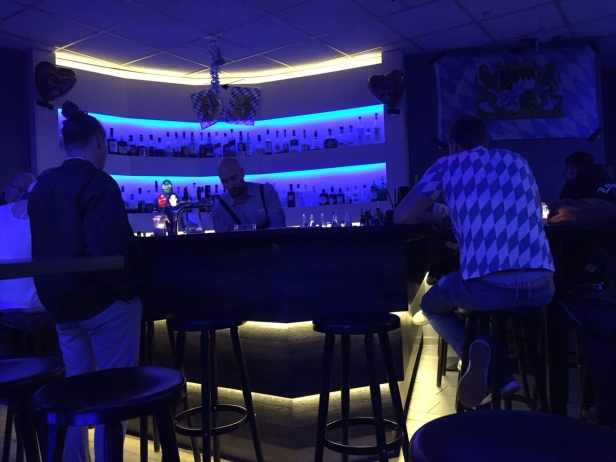 After we’d finished, guided by Google Maps, we went to the Posh Bar in Potsdamer Platz for nice tasting but overpriced cocktails. Siggy had a White Russian and I had a strong tasting mojito. Both were served in too small glasses for our liking and there were no complementary crisps or nuts. The predominant colour in the bar was electric blue making us feel like we were in an 80s electronica video.

We popped into the Grand Hyatt hotel with its posh leather covered handrails and found their awfully fancy looking Jamboree bar, but there was nowhere to sit, so we left. Instead we went to the slightly sleazy feeling Caros Bar for cocktails – Sex on the Beach and a Mai Tai. The drinks were served in better sized glasses but were still rather pricy. Also people were smoking indoors which I don’t like. Anybody would think the Germans weren’t aware of EU regs. The Predominant colour was whorehouse red and they had star shaped urinal blocks – just in case you were wondering. I know I’m such a great travel writer…

Lots of people were gathered outside the onion topped Tempodrom concert venue when we walked back to the hotel. I have no idea what kind of event had been on. Given the name of the place I’m guessing it was probably music of some sort and by the way people were dressed perhaps some kind of rock or blues. At no point did we feel unsafe walking about the area at night although we made a point of not flashing our phones or money around. Apart from the people gathered around the Tempodrom the area around the hotel seemed quite quiet at night.