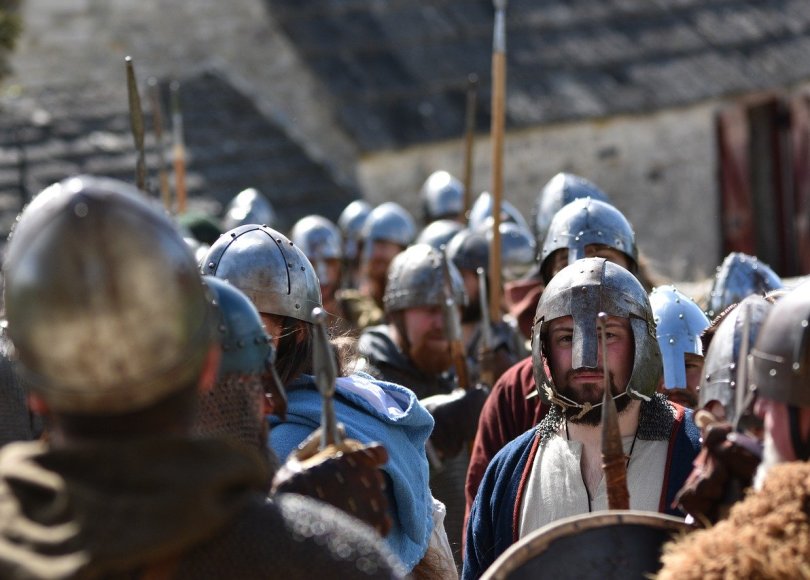 The Lords of the North by Bernard Cornwell as the name implies is largely is set in the north of England, specifically Northumbria of the 9th century, and follows on from Cornwell’s previous book The Pale Horseman.

Disgusted by King Alfred’s lack of generosity, Uhtred goes north with the West Saxon nun Hild seeking to win back his home Bebbanburg from his conniving uncle Ælfric and also depose the Danes Kjartan and his one-eyed son Sven from Dunholm (Durham). Kjartan killed his foster father and kidnapped his stepsister and he has sworn an oath to get his revenge. Oaths and fate, and the balance between the two, are strong themes throughout this book and the others in what has become known as The Warrior Chronicles – a series I have sworn my own oath to read through in correct chronological order and report back to you here on this blog.

Uhtred arrives to find the city of Eoferwic (York) in turmoil. While Dane warlord Ivarr is battling the Scots, Eoferwic has fallen back into Saxon hands. Uhtred is hired by a Danish merchant to escort him to safety through the lands around Dunholm which are ruled cruely by Kjartan and Sven. Unfortunately it’s not long before most are captured by Sven’s men to be sold as slaves. Uhtred disguises himself as a leprous swordsman and convinces Sven he has returned from the dead to haunt him. At the slave station he finds Guthred, a slave who believes he is a king due the prophesizing of Saxon Abbot Eadred. Eadred says that Saint Cuthbert came to him in a dream and told him Guthred will be king of Northumberland and to Saxons and Danes alike. The fact that Eadred doesn’t even recognise Guthred when they meet is, it seems, beside the point.

Guthred converts to Christianity and Uhtred becomes his closest advisor and commander of his household troops. Uhtred, ever one for the ladies, falls for Guthred’s sister, Gisela, but keeps it to himself for fear of upsetting Hild. Uhtred and Guthred capture Eoferwic and then march north to take the much more difficult stronghold at Dunholm. This is where the story takes an unexpected twist with Guthred betraying his new found ally Uhtred in favour of a pact with Ælfric, Uhtred’s tosspot uncle. Ælfric agrees to support Guthred against Kjartan if Uhtred is cast into slavery. Guthred allows Hild to go free and she takes Uhtred’s silver and weapons back to Wessex.

Uhtred spends two hard years working as a slave aboard a Danish merchant’s ship and journeys to such places as Iceland and Francia. The merchant, Sverri, is a canny man and Uhtred finds he has no opportunities to jump ship and return to England. Uhtred befriends another slave Finan, an Irishman and former warrior, and they both dream of freedom while around them slaves die and are replaced. Sverri’s ship is followed and chased on a number of occasions by a mysterious red ship.

One day back in England, in the very location where Uhtred was enslaved, he is picked out from Sverri’s crew by one-eyed Sven. Uhtred is about to be killed when the red ship attacks. Uhtred is rescued! The red ship is crewed by his foster-brother Ragnar the younger and his Uhtred’s old Saxon buddy dour-faced Steapa. Some of the men go off to steal Sverri’s horde back in his homeland, while Uhtred returns to Wessex.

Here he learns that Hild convinced King Alfred to send his hostage Ragnar to Uhtred’s rescue. She promised to use Uhtred’s silver to set up an abbey and return to being a nun serving Christ and looking after the sick and aged. Of course pious Alfred loves that shit and agrees. He also feels a bit guilty for not being generous enough to Uhtred after he helped beat the Danes in the events of the previous book.

Once he has fully recovered from his ordeals Uhtred is sent up north with Father Beocca acting as Alfred’s ambassador to Guthred. Steappa and Ragnar are also part of the entourage. Father Beocca carries holy relics and a message of peace for Northumbria, but written between the lines is a mission for Uhtred to make that peace using his warrior skills. At Guthred’s court they find that Gisela has recently been married to Ælfric via proxy. This is in return for support in another attack against Kjartan, since the first one failed. Ivarr, unhappy with taxes placed on Danes to support the Saxon church, has buggered off to raise troops against Guthred and take back Eoferwic as a Viking city.

Uhtred tells Guthred, who he has very open-mindedly let off betraying him into slavery, that Ælfric will most probably welch on the deal. He calls ‘bullshit’ on the marriage by proxy and declares his intention to marry Gisela who he had not stopped dreaming about when he was a slave. Luckily Gisela also has the hots for Uhtred. There’s a lot of characters among the priesthood that don’t like the idea but, after a little bloodshed, Guthred agrees and they are married. We’ll gloss over the fact that Uhtred technically is still married to a Saxon back in Wessex. He enjoys his wedding night and then takes command of Guthred’s troops for the attack on the seemingly impenetrable fortress at Dunholm.

The attack on Dunholm is a sneaky one. In one of the best sections of the book, albeit quite reminiscent of scenes in some of Cornwell’s Sharpe series, Uhtred leads a band of ‘shadow-walkers’ in the dead of night to get into the compound via a side door women use to fetch water from a well. The mission works, up to a point. Uhtred and his men are saved from being torn apart by Kjartan’s horde of slavering dogs by his stepsister Thyra who has gone feral herself after years of captivity and can command the dogs. It’s a little far-fetched, but sits fine within the context of the superstition and occult which is woven into the Warrior Chronicles.

Thyra turns Kjartan’s hounds on their masters. Uhtred’s men open Dunholm’s main gate for Ragnar and Guthred’s men. Finan beats Sven in combat who is then ripped apart by Thyra’s remaining dogs. Ragnar gets his revenge on Kjartan, who killed his father, and is given control of Dunholm by Guthred once the battle is over.

However, Guthred’s claim to be king of Northumbria is incomplete since there’s the not so small matter of Ivarr’s massive army of Danes to contend with. So while Ragnar makes his peace with Thyra who initially threatens to kill him for leaving it so long before rescuing her (tricky when you’re held hostage by a Saxon king), the depleted forces march to meet Ivarr in battle.

Uhtred bravely solves the problem of Ivarr’s greater numbers by calling out Ivarr from his shield wall and challenging him to single combat in front of his amassed forces. He knows that if he can defeat the warlord in a duel to the death that his reputation is strong enough for Ivarr’s army to disperse back from whence they came. There’s a lot of name calling and then predictably (since otherwise The Warrior Chronicles would stop at this point, and I know there’s a least eight more books in the series!) Uhtred beats Ivarr.

King Alfred’s plan worked. He now has a strong ally in the north in the form of Guthred. Uhtred has a beautiful new wife and an even bigger reputation as a warrior, but on the downside his beloved Bebbanburg is still held by Ælfric and he’s still oathsworn to Alfred. The Fates continue to weave his story.