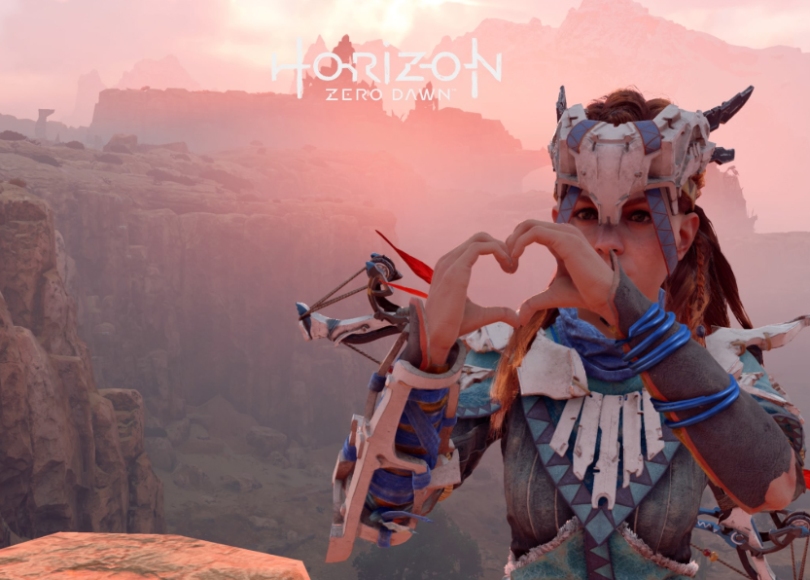 This post should perhaps be subtitled ‘better late than never’ or ‘humble pie’, but if I was going to add a subtitle it would have to be ‘Game of the Year’ although since I’m a few year’s late on the uptake perhaps ‘Game of my Year’ might be more suitable. I’m happy to make that call now as even though I am looking forward to the Star Wars Lego game later this year it’s not going to dent the admiration I have for Horizon Dawn Zero.

So why the drawn-out preamble? Well it goes back to me shrugging off at least three separate recommendations made by Buggles, Howie and Steve-O (names have been changed to protect the innocent) following the release of Horizon Dawn Zero. My flippant replies were along the lines of (a) I’m not interested in a game about robot dinosaurs and (b) I hate boss fights and I know this is just going to be a string of boss fights despite its open world trappings.

Now, after downloading it from the PS Store along with the DLC for a very reasonable £15, and after three or so weeks of gaming, I am happy to admit here and now that I was wrong. So very very wrong.

Horizon Dawn Zero is as close to gaming perfection as I can imagine. I struggle to lodge any complaint about it apart from a very minor frustration early on when I realised if it doesn’t look like it’s got bird shit on it or it’s not coloured yellow then don’t expect to be able to use a ledge or protuberance for climbing. Having pretty much cut my open world teeth on the likes of Assassins Creed, where you can climb on anything (and stuff you don’t even want to climb on a lot of the time) this was the source of a few very small grumbles. I soon got over it. I’m sure there’s a pun in there somewhere.

Where to begin with my praise? Well first of all let me mention the obvious things that spring to mind while I mull on the more nuanced aspects. The graphics and design of locations, characters and gear is excellent as too is the creature design. Visually the machines are great and with the various plates and components you can smash off them to render their various attacks less mind-mindbogglingly awful it makes for great gameplay when coupled with the AI. The machines and human enemies you encounter in the various wilds aren’t deaf or blind like AI adversaries are in a lot of computer games (the stupid-ass soldiers in Assassins Creed (AC) spring to mind) and there are genuinely different levels of alertness and aggressiveness to compete with along with various melee and ranged attacks.

So combat gameplay is at the core of this game and you have a range of weapons at your disposal from a spear, various bow and elemental arrows sets, slings and ‘rattler’ guns like archaic machine guns firing needles of metal. It’s a bit like AC and Thief on acid. Also I shouldn’t forget the tripwires and booby traps you can deploy. Combat is very tactical and it doesn’t pay to wade in gung-ho against many of the larger machines. I actually spent a lot of time sneaking around like I was playing AC, whistling to attract attention and then doing one-button takedowns (of the smaller machines) and later over-riding machines with my trusty spear.

I often let an over-ridden machine fight for me, in the same way I’d use berserk arrows on enemies in AC, and didn’t spend much time riding them around. I preferred staying on foot picking up all the goodies along the way (plants and stuff for use in potions etc.). I also very quickly got my hands on the equivalent of an eternal port stone a gold travel pack that you could reuse indefinitely to fast travel to pre-discovered map locations. 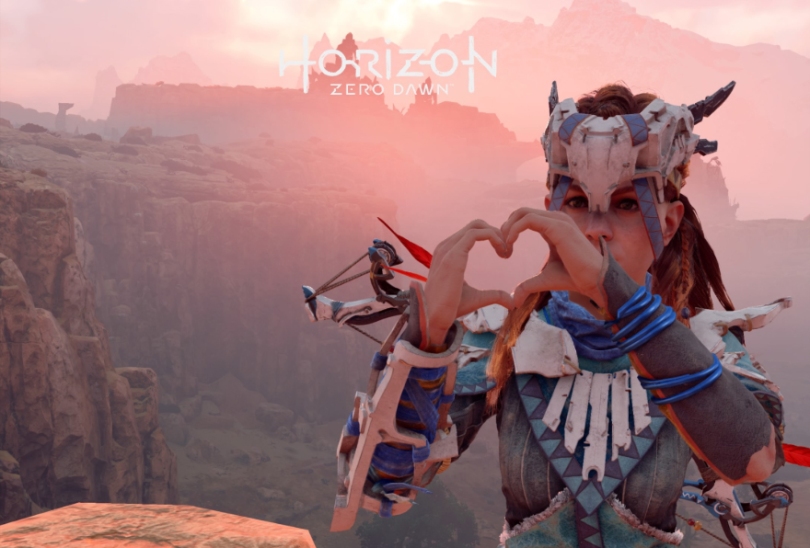 The map as far I can tell is truly open world but of course if you arrive at a location that’s later used for a quest don’t expect to run into the quest characters ahead of the storyline. That said, I did accidentally blunder into a heap of trouble and fight my way back out of a remote corner of the map ahead of time and was very pleased that the game had remembered all the killing I had done and left the area clear for me when I returned about twenty hours of play later toward the end of the main story quests.

Of course there’s also a bunch of story quests to complete and this is the second strong pillar on which this game is built (if the first is the combat system). The story is really very good. Its well written, well acted and has a bunch of very interesting characters, an intriguing back story about Earth being ravaged by a machine war, and a real sense of mystery at the heart of the main character Aloy’s parentage and significance in the future of the planet. It’s great quality post-apocalyptic science fiction storytelling with a good seam of tribal nonsense and new religions thrown in for good measure. If Halo would make a good film Horizon Dawn Zero could make a good trilogy of films.

In terms of my particular game play I did what I usually do and went off exploring and finding the collectables first, fighting what I could along the way and getting as much stock of wood, herbs and machine parts as I could for crafting. I concentrated then on crafting all my bags so I could carry more goodies and did as many side quests and errands as I could while dipping in and out of the story quests. That way I was always about 5 levels higher than the recommended levels going into the story quests.

I also didn’t buy any weapons or armour apart from the highest rated items (they are helpfully colour coded) as and when I could afford them or had the necessary parts to trade with the various traders en route. I also spent a lot of time using the tinker skill to fiddle about clipping in modifications to the weapons and armour like a true RPG champ. I’m sure it’s a common modus operandi for most players and certainly helped to prolong the excellent story while avoiding the post-game trophy-hunting that is often a symptom of a rushed approach to story missions.

So by the time I did the very last story quest I was in possession of the special armour and was around level 51. Of course I I was also helped by all the allies I had made friends with along the way, which I assume counted for something. I was right that there was a series of boss battles to get through but at no point did I feel the tedium of the task at hand. For someone who really hates boss battles this was a big deal. The finale is as good as I had hoped and there was a real sense of having accomplished something at the end of it all. I trekked off to The Frozen Wilds a very happy man. 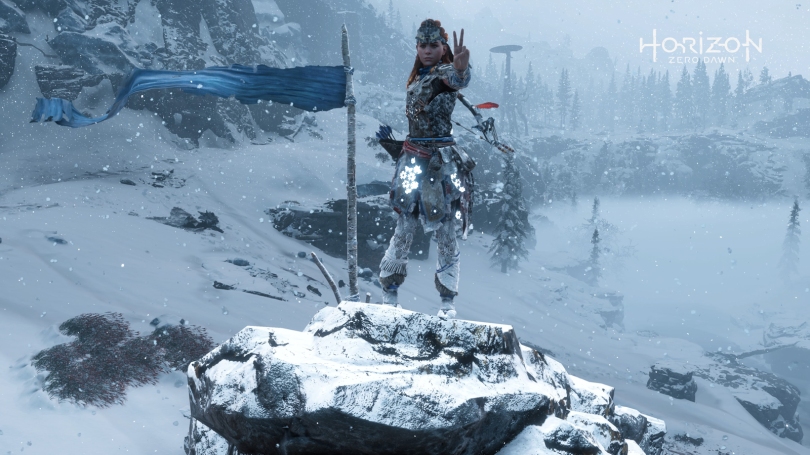 One last point, getting to grips with the game is aided by the tutorial missions associated with each new weapon you acquire and I would recommend playing them through since they also increase your experience points which then in turn give you more skill points to use on new skills for Aloy. I found the double and triple arrow firing option a real help when fighting larger machines, the tinker skill so you can clip and unclip mods on weapons and armour without wasting them, and of course all the extra manoeuvrability and extra damage related options.

In terms of learning about machine weaknesses the notebook comes in handy once you’ve scanned creatures using your focus – an augmented reality ear-piece – and for practice I recommend you visit the five hunting grounds on the map. There’s a lot of learning to be had and more experience points and maybe even some exclusive hunter weapons if you’re good at it.

Here’s the E3 2016 trailer which does a good job of teasing the game, but actually contains a lot of stuff that’s not in-game footage. What’s in the game is actually better…

Images were taken by me using the excellent Photo Mode in the game and I’m calling ‘fair use’ on my use of them here.