Our second full day started out as more or less a carbon copy of our first full day. I had cereal and a pastry for breakfast and watched tottering towers of toast carried past by hungry guests.

It was less windy and hotter today. In terms of sources of irritation, the Italian looking bat and ballers were replaced by a bunch of wedding party members from the south of England. A couple of the chaps talked in loud voices about themselves making unsubtle references to how they could afford trips to Barbados and Florida and buy Bang & Olufsen wireless headphones. This went on well into the afternoon with a break while we went for lunch.

The ludicrous highlight was the loudest of the chaps, between sips of his reassuringly expensive Stella Artois (no Alfa or Mythos for these minted millennials), explaining how some bands  like the Red Hot Chili Peppers put different sounds into the left and right speakers.

‘It’s called ‘stereo’, The Beatles were doing it in the 1960s, you fucking muppet,’ I muttered to myself and repeatedly punched the sand as if it was the chap’s smug little face. I need to relax and unwind. Perhaps on a beach holiday…

We went to Demi’s again for lunch. This time without my camera. I had a chicken caesar baguette, Siggy had fruit salad again and we both had vanilla milkshakes.  The baguette looked nicer on paper than it did in my mouth, but it was a welcome break from the wedding party – who kindly put on their music for us to listen to this afternoon. Whether we liked it or not. They’re entitled to do that right?

Is it bad of me to get pissed of with these people, who for all I know have been slaving away in their jobs all year to save up the cash to come and spoil my holiday? Perhaps I shouldn’t be so antisocial. perhaps I should go and have a little dance around their sunbeds.

Instead, I finished I See You and moved on to Lee Child’s The Hard Way. Then we, thankfully, left the beach a bit earlier than yesterday to walk along the beach road to the neighbouring resort of Perivolos. 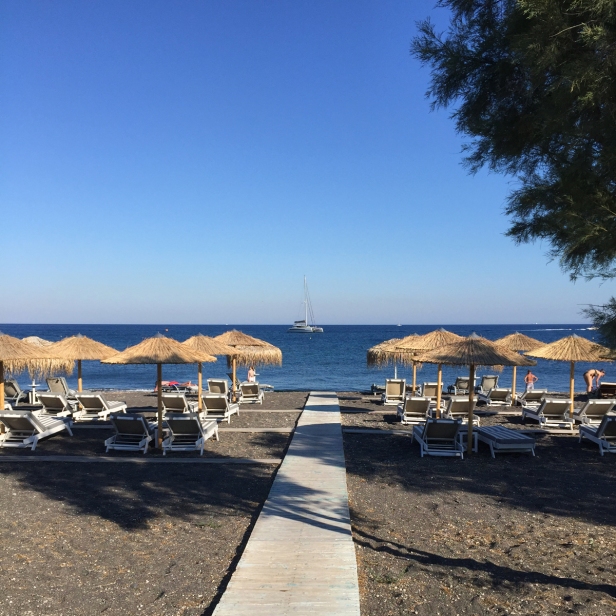 Perivolos seemed less pretentious than Parissa and had a lot more interesting looking bars and restaurants, so we will probably pay it another visit one evening. It’s less than 20 minutes walk from our hotel (Aqua Blue). We had a couple of nice Snickers ice cream cornets and a Diet Coke to keep up our energy.

We went all the way to Atlantis Island, two doors down from our hotel, for dinner Set Menu C – Greek salad, tzatziki, pastitsio and cream caramel. The huge restaurant was very busy with two waiters running around like super sweaty blue-arsed flies. The card we got with our bill said ‘Dionysos in Atlantis’ so maybe that’s the official name of the place.

The portion of pastitsio was big and served in a pot. The pasta tubes inside were much bigger than we usually get. The cream caramel was just like you can get from Tesco but perfectly okay.

We visited Veggera Pool Bar on the beach road for cocktails but changed our minds and had two large Alfa when we saw the prices of the cocktails. We’re so used to cocktails being around the 7 Euro mark that the prices in Santorini are very of-putting. The usual reggae music was on the sound system and Slovakia playing soccer against Sweden on the projector.

We’ve seen lots of dogs but only one cat so far. Celebrity lookalikes tonight were Jeremy Irons, Steven Spielberg (if I’d known I would’ve worn my Jaws teeshirt) and Billie Jean King.