I’ve been spending most of my spare time working on a talk I’m doing with the local Rotary Club on ‘What Makes A Good Story’. It’s going to be half about the narrative arc using Blade Runner and Oliver Twist as examples, and half about my writing process – how I start writing, how I structure my books and where I get my inspiration from. I asked them to give me a list of their favourite stories and I was so relieved when I saw Blade Runner on there, as it is one of my all time favourite films. I’ve never read Oliver Twist but seen at least two film adaptations, and I was able to get a decent plot outline from the internet. The lengths I’ll go to for a free meal…

While I was messing with the settings of my smart television, I noticed that Google Play had an offer on to see one of a list of new films for 99p, so I chose Lady Bird. Luckily I watched it before Mark Kermode covered coming of age films on his Secrets of Cinema BBC4 show which had quite a few clips from the film. The film’s director Greta Gerwig was interviewed recently on Adam Buxton’s podcast and so I was interested in watching it. Even more so when I saw that it starred Saoirse Ronan (Hanna, The Lovely Bones) who I think is a great actor.

I also recently watched Grave of the Fireflies and My Neighbors the Yamadas recorded from Film Four’s Studio Ghibli season. The first is a depressing tale of the effects of the US’s incendiary bombing campaign against Japan in WWII from the point of view of a teenage boy who has to look after his much younger sister. It’s emotional stuff, and so it was a relief to watch the other film as some comic relief. It’s rather crudely drawn for a Studio Ghibli animation having a kind of Sunday paper ‘funnies’ feel to it’s comic scenes.

Talking of family comedies, after reading A Spot of Bother I jumped straight into reading Mark Haddon’s next book The Red House. The first thing that leapt out at me and went on to thoroughly annoy me throughout the book was the author’s odd decision to dispense with speech marks for the dialogue and use italics instead. It made the book quite difficult to follow at times, especially when lines weren’t being attributed to the characters who were speaking.

However, the story of two families spending a week together in a holiday cottage and uncovering old grudges and anxieties made for strangely entertaining reading. I especially enjoyed the viewpoints of the youngest son and the teenage son which I could most relate to. I was waiting for some big twist, like they were all ghosts or something (hence the italicised dialogue) but it never happened and there felt like quite a few threads were left partially unresolved.

I was on safer more familiar ground with A Wanted Man by Lee Child. This book has Jack Reacher mostly riding inside of various cars, starting with a car driven by a suspicious man and his partner and a silent woman on the back seat. Reacher has been picked up as a hitch-hiker despite his busted nose – a carry over from the last book – and from the behaviour of the car’s occupants it’s obvious that something is amiss.

I found the twisting and turning plot involving the FBI, the CIA operating on American soil and a bunch of mostly unseen Syrian baddies very entertaining and all the driving about and visiting motels and petrol stations part of the fun. The story was quite unlike most Reacher books because of the vehicular constraints placed upon our hero but when he’s finally back on foot and armed with a pistol for the finale, it is grand indeed and very Bond-esque.

I finally plucked up the energy to watch the Sense8 Series Finale and did so all in one go to minimise the pain – since it’s around two and a half hours long and given how badly paced the two seasons have been. For two hours of the run-time I actually found myself enjoying it a great deal, despite some awful over-acting from some members of the cast. The writers did a good job of wrapping up all the loose ends and explaining the plot which seemed to spiralling into an overly complex nosedive during Season 2.

The last half hour of the series finale seemed to be a long-winded goodbye where as many previous characters as possible were shoe-horned together for Nomi and Amanita’s wedding on the Eiffel Tower. An earlier scene had the sensates singing along to Depeche Mode’s ‘I Feel You’, which was nice to see for a fan of the band, but as usual there were a number of ‘filler’ scenes that just felt like pop videos.

Also on Netflix, I spotted The Zero Theorem – a Terry Gilliam film very much in the style of the excellent Brazil and Twelve Monkeys. It’s a science fiction comedy starring Cristoph Waltz, David Thewlis and Matt Damon among others and the story revolves around an ‘entity cruncher’ given the project of getting to a result that zero = 100%.

Quite what this actually means isn’t really the point of the film which is more a zany play on a dystopian Kafkesque future where everyone is tied to their screens and bop about wearing bright coloured clothing and being wacky. Qohen (Waltz) is very much a stranger in this strange land and waiting for an explanatory telephone call from God which will never arrive.

In exploring the ultimate pointlessness of existence, the story certainly had potential, but it felt like it was very badly delivered and a lot of the ‘comedy’ rather stupid. I didn’t feel engaged properly with the main character and the vagueness of what he was actually doing meant that the film didn’t speak to me like most of Gilliam’s other films have. I was also quite dismayed over the absence of any strong female characters.

The feature image on this post is one of my photos taken during a trip up North. It was taken on a lovely sunny day in Winckley Square Park in Preston. There was an exhibition of mostly British comic book art in the Harris Museum which featured a video of Jamie Smart doing some drawing and inking. I’ve been following him on Twitter for quite some time and it was nice that I got a reply off him when I expressed my thanks to him for showing the public some of his process.

I’d love to post some artwork but I realised that I really shouldn’t have been taking any pictures when I saw the signs on the way out. There were some great uncoloured but inked cover art for Batman and Hulk comics as well as a lot of original layouts of classic Beano strips – the artist being a Preston local.

Instead, here’s a view from the Harris looking at a memorial and one of the pedestrianised streets. It was beginning to cloud over by then and threatening to turn into a typical dismal Saturday in Lancashire. As it transpired it didn’t rain. For a change. 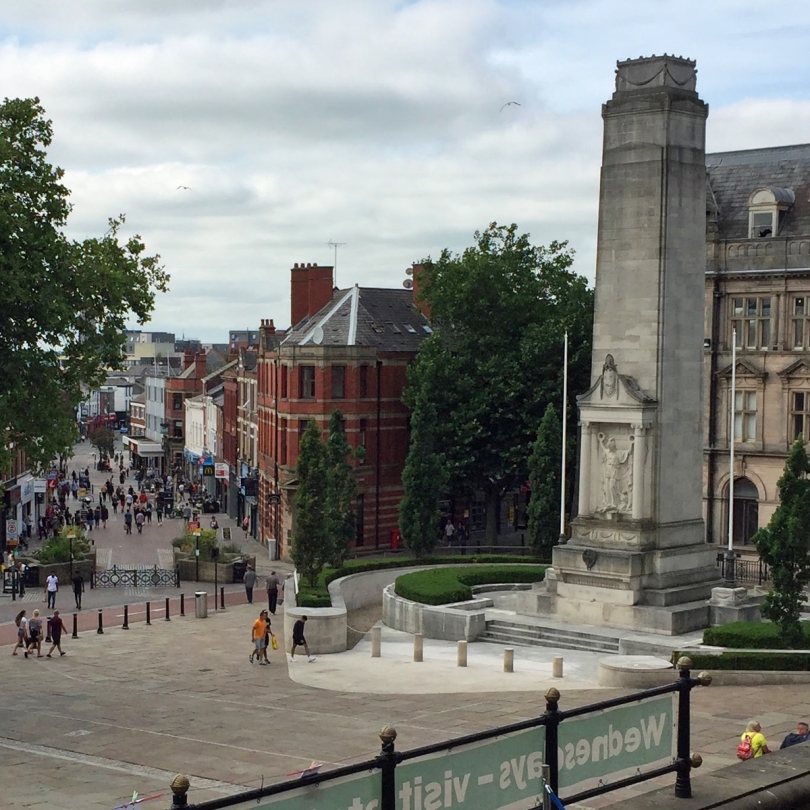