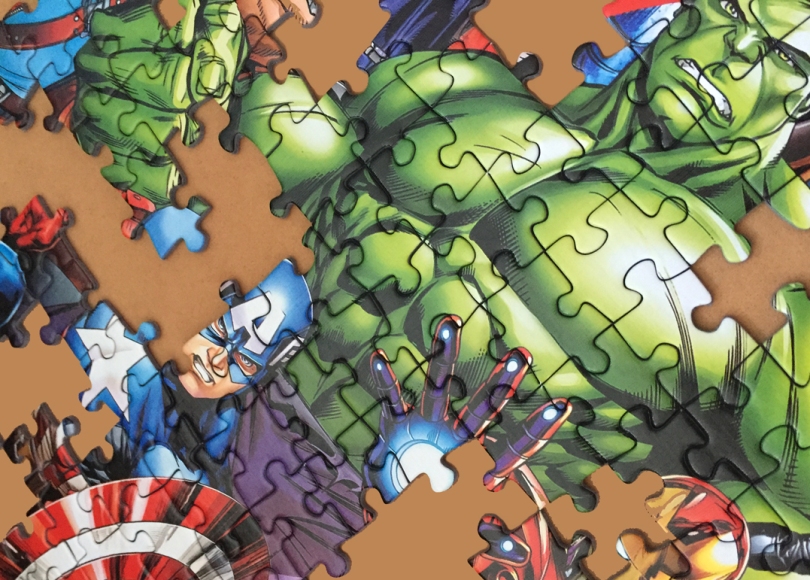 Puzzle (2018) stars Kelly Macdonald (Trainspotting) as an American housewife who slowly realises that she is not living to her full potential while being taken for granted by her husband, played by David Denman (The American Office), with one son who is a bit of a douche and the other who works in the garage with his father but would rather be a chef. What initiates her journey is either a iPhone she gets for her birthday or a jigsaw. Apple execs will point to the phone but the clue’s in the name and it’s the puzzle which is the trigger for her transformation into an independent free-thinker.

She meets a guy, played wonderfully by Irfan Khan (Jurassic World), who also does jigsaws when he’s not watching news about disasters on TV. They enter a jigsaw competition together and while they practice behind her family’s back a romance blossoms. This bit seems a little sudden and/or tacked on and why we could just watch a story about her defying her husband through the love of jigsaws is beyond me. Still, it’s a good film without needing to be hilarious from director Marc Turtletaub perhaps best know for Little Miss Sunshine and the possibly underrated Macdonald is as brilliant as ever.

Journeyman (2017) stars writer/director Paddy Considine (Peaky Blinders, The Bourne Ultimatum) as a champion boxer who sustains a brain injury while defending his title. Jodie Whittaker (Doctor Who) stars as his wife and again shows us how good an actor she can be when not prancing about with a sonic screwdriver. However it’s Considine that shines in this film. I have seen established American actors pick up Academy Awards for performances less powerful than what Considine brings to this role.

The portrayal is gritty and well-observed, the story is poignant but ultimately uplifting and this low-budget film does well in covering a side of the sport which is rarely touched upon in Hollywood films. This is the best film I watched in August.

BlackkKlansman (2018) is a Spike Lee joint telling the real-life story of Ron Stallworth (played by John David Washington), an African American police officer from who successfully managed to infiltrate a local Ku Klux Klan group with the help of a Jewish colleague (Adam Driver).

Both lead actors are great, but I was especially impressed by Driver, who up until The Man Who Killed Don Quixote I had only really seen in the Star Wars movies. If even half of what’s in the movie actually happened then it beggars belief and goes to show how stupid some people can be. In the closing scenes of the film there is a serious and grim reminder – based on real footage from recent traumatic events – that these idiots are still active, and its so bad I feel that it needs some kind of trigger warning. Lee does a good job of saying ‘okay you’ve had your jokes, now here’s a dose of reality…’

The Old Guard (2020) did a good job of making me want to read the graphic novel on which it was based and showed me that not all Netflix films are downright turkeys. The most excellent Charlize Theron plays the leader of a black-ops team of immortals who get an unexpected new member (able to ask the others to provide as much exposition as the viewer requires) and have to battle a bunch of throwaway grunts in the employ of a dastardly billionaire intent on making money out of their DNA.

There’s an excellent honest trailer for this film that does a great job of picking away at the stitching of this film to reveal how budget constraints can limit a story, but there’s so much action that I didn’t notice the shortcomings at the time. I wasn’t exactly spinning cartwheels of joy at the end of it, as it was obviously quite formulaic, but the Highlander inspired characters were interesting enough to keep me entertained for two hours.

Replicas (2018) on the other hand shows that given you have a big name (Keanu Reeves) on board means you might neglect to pay attention to the script. This misfiring update of the Frankenstein myth mixing AI with cloning doesn’t seem to be able to decide if it is a dark comedy or a serious science-fiction thriller.

It is a strange mess of tropes blended into a electric blue smoothie that has too many lumps in it to be easy to swallow down. The acting is wooden, the jokey bits incongruous and the plot ridiculous. It’s directed by Jeffrey Nachmanoff who is a prolific writer and producer, and it makes me wonder why he didn’t rewrite some of Stephen Hamel’s story and Chad St John’s screenplay, since at least one of them was responsible for another Reeves turkey in the form of Siberia.

The Equalizer 2 (2018) is Denzel Washington’s first ever sequel and it’s not half bad. It’s directed by Antoine Fuqua who did the 2014 film and has a string of good action films on his CV such as Training Day, Shooter, and Brooklyn’s Finest.

Robert McCall aka The Equalizer, is a retired CIA operative, is working as a Lyft driver picking up vigilante missions for justice as well as fares. When an old CIA buddy is murdered he goes on a Taken style journey of revenge around the world but culminating in a stormy finale back home in an evacuated coastal town.

This Is Where I Leave You (2014) is a less-recent American comedy that popped up on Netflix and looked like fun given the cast which includes Jason Bateman (Ozark, Arrested Development), Corey Stoll (Ant-Man), the aforementioned Adam Driver and Tina Fey (30 Rock, Sisters) as siblings, Jane Fonda as their widowed mother and Rose Byrne (Bridesmaids) as a love interest for Bateman’s character, as well as Ben Schwartz (Parks and Recreation, Space Force).

Stranger Things director Shawn Levy gives a well put together story based on a book by Jonathan Tropper about an over-sharing mother who hosts her three sons and daughter for a week-long reflection on the life of their recently deceased father in their childhood home. The siblings carry with them a host of emotional baggage and dysfunctional relationships which are plundered thoroughly for comedy value. Driver is again brilliant as the youngest sibling while Bateman is looking increasing like he just ‘plays himself’ in everything (which actually is okay I guess). I found the ‘left-behind’ characters of the childhood sweethearts played by Byrne and Timothy Olyphant perhaps more interesting than the main ones, but I guess it’s a good sign of a richly layered film that they had that quality to them.

The Lovebirds (2020) is, dare I say it, a Netflix film about a couple who are just about splitting up when they are drawn into a murder mystery comedy caper. The two stars, Issa Rae and Kumail Nanjiani, are unknown to me which helped the suspension of disbelief and it’s a short film which clips along at a good pace.

For a simple action romcom it’s pretty good, with some smart lines and a good soundtrack, I can’t really say much more than that.

There’s not been so many films this month as I’ve been doing a lot of jigsaws. I also watched Joker again, this time with Siggy, and enjoyed it just as much as the last time.