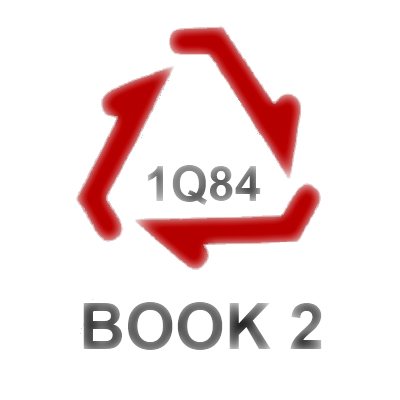 I am going to be very succinct with this review as I feel I have wasted enough of my time already reading this book. From that you can guess where this is heading!

I was sorely disappointed with this, the second part of Murakami’s enormous surrealistic tale of 1984, and not just because of the weight of the combined Books 1-3 volume giving me severe arm-ache. If ever there was an argument to buy a Kindle this book is it. Book 2 is repetitive and meandering, and as I read I caught myself thinking ‘just get on with it!’ on several occasions.

Book 2 also includes some highly dubious sexual content that reads more like the fantasies of a pervert rather than the highly regarded literature I would expect of Murakami. The only scene that came as close to disgusting me in book form is an unnecessary ‘watersports’ scene in one of Ben Elton’s books.

While he is not writing about underage sex Murakami also gives us ingredient by ingredient details of what the characters are having for tea. So much so that at times it reads like a cookery book. In the past I have applauded Murakami for his obsessive eye for detail and the way he brings an elegance to the smallest of actions. In this book it just pissed me off. I wanted some answers about ‘the little people’ and the two moons in the sky, and while some pieces of the puzzle were slotted into place the pay-off amongst the tedium was too slight to warrant trawling through so many pages.

Murakami takes way too long to progress the story; almost as if he was being paid per word.

I will persevere and read Book 3, but I am not going to rush into the experience. I have thirteen other books by Murakami on my book shelves and every one of them is ten times better than this book. I’ll take some deep breathes now and go and read some George R. R. Martin to calm myself down… winter is coming after all…