It was a struggle to get up and out of the room after our late night last night. I didn’t feel particularly hungry but managed a bowl of muesli and a mini pain au chocolat for breakfast. We sat in the outside area of the restaurant for breakfast and while it was shaded the heat off the tiled floor was already intense. Anywhere with concrete, tiles or tarmac radiates an intense heat all day which is why we prefer the beach to the pool area. Well that’s one of the reasons anyway.

Any breeze you get is welcome and you can always dip in the sea if you think you’re overheating. We had a couple of dips today wearing some made in China beach shoes that we bought for around 10 Euro from one of the many shops in Perissa. The insoles fall out and the Velcro fasteners aren’t quite aligned properly, but you get what you pay for I guess. I brought some Primark beach shoes with me but they aren’t really water proof – just fancy slippers again probably made in a sweat shop in China same as my iPhone. What would we do without them? 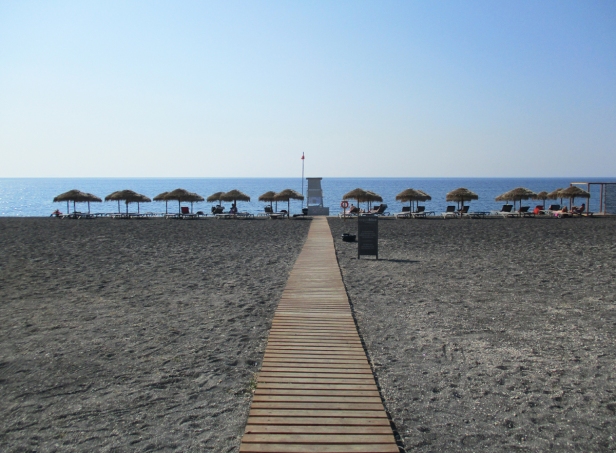 We had lunch at Ntomatini restaurant. I had some bread and a Greek salad and Siggy had a baked potato of all things. Both were tasty, not too extortionately priced and followed by a big slice of watermelon on the house. They were a bit skimpy on the cucumber again in the salad but I think this is a Santorini thing – always leaning towards the local tomatoes.

I carried on reading End Of Watch and Siggy has made good headway into I See You. We took a break from reading on the beach to get some ice creams – I had a Colossus and Siggy had an M&Ms cone. Both would have melted into a mess of cream and chocolate within five minutes in the blazing heat if we had not been so dedicated in our consumption.

Plenty of people were drinking beer at lunchtime, but any alcohol while the sun is high in the sky and certainly nowhere near over the yard arm seems like a bad idea to me. As does going to the hotel’s gym but that is precisely what Siggy did at the end of an already sweaty afternoon, while I bathed in our room’s AC and typed this up.

It was nice to have a relaxing day after the stress of visiting Fira yesterday. No one was too annoying on the beach today and I managed to have a bit of a snooze at one point. It wasn’t as blowy as yesterday which is why it felt hotter.

I realise this is the least interesting post about Santorini so far and for that I apologise. You know, some days are just for kicking back and chillaxing. Here’s a few more photos from previous days by way of compensation: 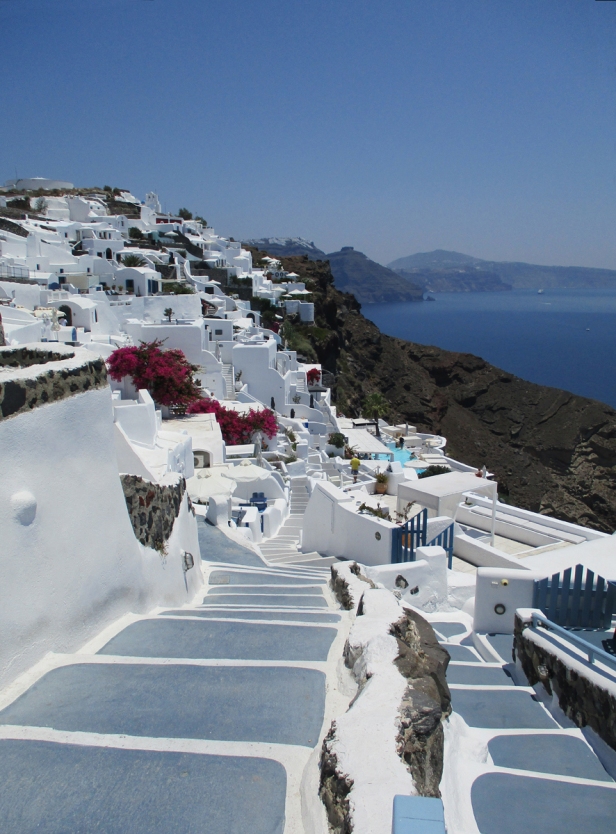 We visited Kouzina restaurant on the edge of Perivolos for dinner. Seeded brioche buns, tzatziki and olives. Siggy had lamb chops and I had Chiounkiar Begernti Istanbul – beef braised in tomatoe sauce with garlic, cinnamon and white eggplant puree.

Given they only had seven tables full the service was pretty inattentive and slow. The egg plant puree was like baby food and the strong flavours I was expecting were nonexistent. However what there was of the beef was very nicely slow cooked without any gristle or fat and Siggy enjoyed her chops. We spent most of the meal sitting in the cloud of cigarette smoke from a couple of women at another table which didn’t help.

When we did finally get the menu for another look the waitress told us they only had three of the listed desserts – ravani, baklava and chocolate soufflé. We opted for a big portion of moist ravani (a bit like lemon drizzle cake but made with oranges instead of lemons) which came with chocolate ice cream.

Something I don’t think I’ve mentioned before is the number of all sorts of breeds of dogs around Perissa, big and small, and the absence of all but a few cats. Being a big dog lover and cat hater (‘hater’ is maybe a bit strong but you get the idea) this is great for me. There’s terriers, Labradors, mongrels, Alsatians and we even saw a St Bernard.

The other thing that stands out after ten days here is the love of reggae. Most music bars play it on and off and I can’t recall hearing that much on holiday in Greece before. We sat in the heat of the night and downed a few Radlers while watching dogs toddle about and keeping an eye out for celebrity lookalikes. It’s difficult when it’s dark though.

Also the water in the taps and showers here is the least desalinated I’ve experienced. It should go without saying that you shouldn’t drink it, but also bear in mind that it’s really difficult to get a good lather up with normal soap or a shaving stick.

6 x 1.5 litre bottles of still water should cost you around 2.50 Euro depending on the brand (we went for the marginally cheaper Zaro’s) and one bottle from a restaurant will be about the same price. Small single bottles from a shop are around 50 cents.